Thankful: Past, Present, and Future

Thanksgiving this year at our house wound up being about a two week event with lots of comings and goings.

[Try to follow along if you like!:  Ian left for New York for a week starting back on Quinn's birthday to watch our niece while my brother, Arno, and his wife had to be in other time zones, and he didn't get back until two days before Thanksgiving.  My parents arrived a week before Thanksgiving, and my brother, Barrett, came out by bus from LaCrosse for a day around then to visit with all of us before heading back to teach a few more classes and returning with his wife, Dosha, (and their dog) the night before the big feast.  Arno and his daughter, Ellora, arrived the day before Thanksgiving.]

All in all we ended up with six guests (plus dog guest) staying in the house and it was great.

I think it was the first time I've been with my parents and both my brothers at a Thanksgiving table in over 20 years.  After we all left for college it just wasn't worth the effort and expense to gather at the end of November when there was a longer break with even more relatives to see a month later.  Having everyone together this year was a rare and wonderful treat. 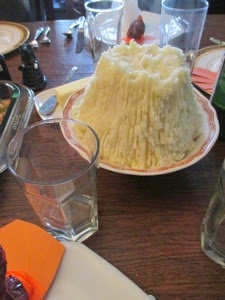 Dinner itself was delicious and fun.  My mom made some excellent dishes for the vegetarians among us, my husband cooked the turkey, I made pumpkin pie, Mona made the place markers, Barrett got creative with the napkins, and Arno made the potatoes into a nice Devil's Tower. 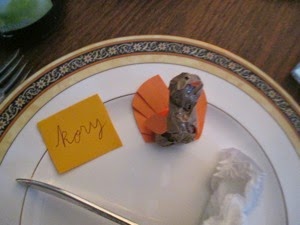 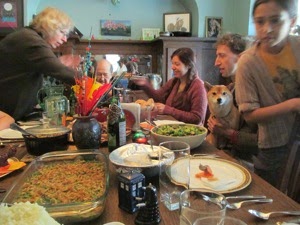 Among the activities we got to do with our visitors was a trip to the nearby high school.  Back in October there was a silent auction to raise money for programs at Bay View High, and I bid on (and won) a tour of the school with the principal.  My grandfather went to Bay View High.  It's only a few blocks from our house and I decided a tour of the halls where her father used to walk would be a good birthday present for my mom.  I asked the principal if he would be available Thanksgiving weekend and he said that would be fine.

We started off with just me, Ian, Dosha, and my mom, but were soon joined by both my brothers, Quinn, Mona, and Ellora (who were late because they'd been sledding in the park next to the school).  It was a lot of fun and I'm glad so many family members wanted to join us. 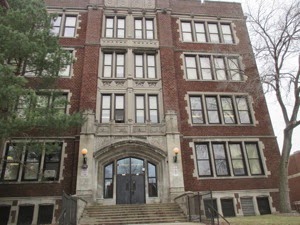 The building itself is 100 years old this year.  It's a grand old school with a slightly clunkier addition on it, but the original elements remain fascinating.  The brick work is well designed, and there are hand-carved figures and faces all around the outside. 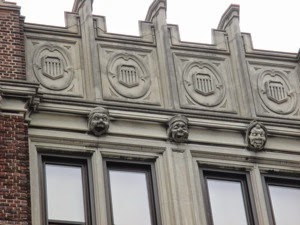 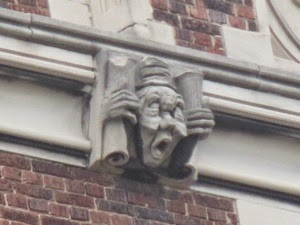 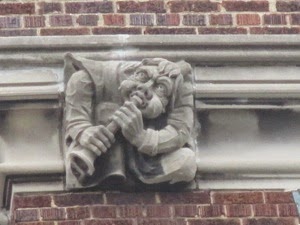 Mr Shapiro, the principal, is energetic and bright, and the school is lucky to have him.  He looked like he could be in the cast of Grease, and seemed genuinely pleased to get to lead us all around his building.  He was proud to show off every part of it from the boiler room to rooftop, and I was impressed that he knew the names of everyone we passed from students to the custodian.

The school has had an uneven reputation in the time I've lived here and has had trouble attracting local families (Milwaukee has "school choice" and kids can apply to go anywhere), but I was impressed with what I saw on our tour, and if they can hang onto Mr Shapiro I think it has an excellent chance of doing great things.  The school is back on our list of possibilities for Aden in a couple of years.

There was an addition put on Bay View High back in the 70s, and the original entrance was saved on the interior of the school.  I loved learning that was where my grandfather would have actually walked into the building. 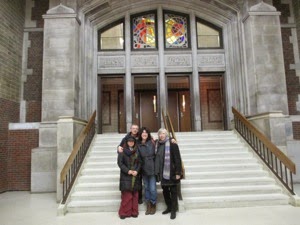 We visited the construction classroom where kids build and wire an entire one floor house.  (In the room next door apparently kids learn how to tear down structures, so there is always one building going up as another is coming down.)  I would have loved the opportunity to take a class like that in high school.  The kids also got to sit in the old fashioned driver's ed simulators, and we got to walk under the pool and see the hole in the basement where it would drain if it ever sprung a leak.

The school's original focus was on the arts, and they still have real artwork on loan from the Milwaukee Art Museum.  In later years the focus shifted to more ROTC oriented programs.  Currently Bay View High is doing something called "STEAM" which is STEM with Arts thrown in.  The walls were newly painted with inspirational quotes all over the building, and alongside famous lines from people like Martin Luther King Jr were quotes from some of the students themselves.  The school let everyone submit words that they wish had been said to them on their first day of high school, and the best ones were voted on and included on the walls.  Mr Shapiro said some people were really emotional about it at the unveiling.

I love that idea because it means something to leave a positive physical mark on your school.  Arno and I once went back to our old high school on a visit home, and we came across a mural he painted in the halls of the science wing and it was a real point of pride that it was still there.


Toward the end of our tour we got to go up in the tower, but it's not a space that is up to code so the alumni association uses it for storage.  All the old yearbooks are there, and we found one from 1933 and were able to find my grandfather in it: Tony Eufinger in Miss Miller's homeroom.


My grandfather dropped out of school to support his family during the Depression.  The story is that the principal at the time, Mr Fritsche, went out to the farm where grandpa was working and told him he should really come back to school.  Grandpa replied that he didn't have any appropriate clothes for it at that point, so Mr Fritsche gave him his own sweater.  My mom says that's got to be the sweater in the yearbook picture because my grandfather wore it every day.  My grandfather not only finished school but went on to college and met my grandmother, so I owe my very existence to Mr Fritsche and his sweater.

My grandfather would not have been able to afford a yearbook, so this was the first we'd ever seen of this photo.  Mr Shapiro let us keep it, and I almost cried.


Thanksgiving for us this year was unusually rich with family on a broad timeline.  Holidays are generally about tradition, looking forward and looking back, but between exploring a bit of my grandfather's experience growing up in this area, having my whole family assembled in one place to enjoy in the present, and celebrating the fact that Barrett and Dosha are expecting their first baby in the spring, the larger family story was simply more animated and in focus than during other holidays.  So much to look back on and think about, so much to appreciate, so much to look forward to.

I am fortunate to belong to the family I do.  There are ups and downs and complicated issues as with every family, but I value how special the people are that I get to lay some kind of claim to through that word.  It's too easy to take for granted, and I have to remember sometimes that many people don't have that network to help remind them where they come from and who will support where they want to go.  I'm thankful for my family and that support, both looking forward and looking back.  It's a great view from here.