I can't really take any credit for Aden's birthday cake this year.  I was hoping to redeem myself after last year's cake wreck, but all I did for this cake was frost it and suggest the general concept.  Aden baked two layers of vegan chocolate cake, I did the crumb coat and the final frosting surface, then Aden did all the decorating herself. 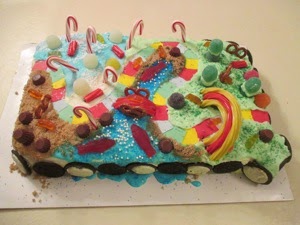 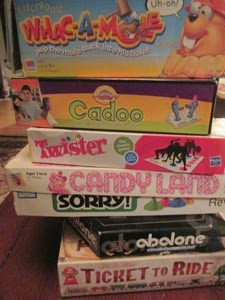 She wanted a board game theme for her sleepover this year, and she decided to do her own take on the Candyland board.

So here was the extent of what I helped with (aside from picking up some candy from the store while I was out). 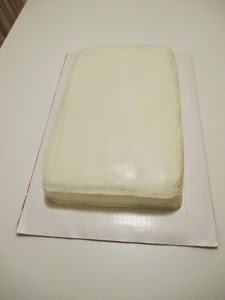 Then Aden stayed up late decorating with her brother assisting here and there (mostly with helping open Oreos before pressing them into the sides of the cake). 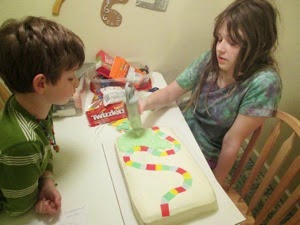 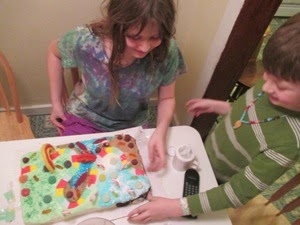 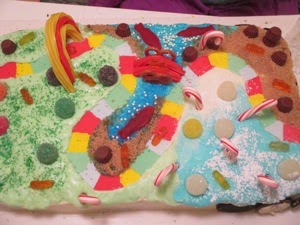 There's a Twizzler bridge, and brown sugar beaches, Swedish fish in the water, a Candy Cane Forest and a Gumdrop Lane.  Aden decided Sugar Plums and Molasses were out and Reese's Cups and Gummy Bunnies were in.  (I'm actually a little surprised some candy company hasn't updated the Candyland board with name-brand treats by now.  Or maybe they have and I am blissfully unaware.)

I think she did a smashing job!  And as much as I enjoy doing my kids' cakes I kind of appreciated the break from this one with all I have going on at the moment. Posted by Korinthia at 7:27 AM