We have skunks under the foundation of the addition on our house--the part without a basement beneath it.  We've been putting up with with an occasional skunk bomb going off near our house for probably the past year and a half, but only recently realized where they were living.  I thought maybe they were under the deck.

Anyway, the impossibly skunky stench was so bad when they blasted our house in the middle of the night last week that I couldn't sleep, and we finally called someone to trap the skunks.  The traps have been out for days now, and still nothing.  They got tripped the first night, probably by curious raccoons, but although we see lots of little skunk prints in the snow along the fence, no skunks have taken the literal bait.

The skunk bomb went off again last night at about 4 a.m. and we are doing our best to air out the house.  The smell is in every room, and when I got to the Y this morning to swim I realized it was on my coat.  I'm hoping I can find some clothes to wear to work that won't offend the olfactory senses of my violin store customers.

So I thought it was funny when I came home yesterday and found that the kids on their day off from school were dressed in their Halloween costumes, which meant Quinn was a skunk.  He'd spent part of his day as a bluejay, but by the time I saw him he was decked out in his black and white fuzzy finest.

I told Quinn to be careful of the traps out back.  He assured me he was smarter than the average skunk. 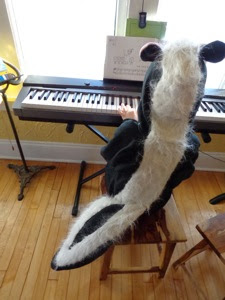 Quinn is also more talented than the average skunk.  Now, if the little stinkers under the house practiced as much as he did, I might consider putting up with the smell.  But slacker skunks have to go.
Posted by Korinthia at 11:23 AM