My kids got their report cards last week.  They all seem to be doing fine.

Although, honestly, Montessori report cards are a little odd.  There are lists of skills broken down by category, and for each item Aden and Mona receive an X, a / , or a - .  At first glance it always takes me a minute to figure out what is going on.  An X is good on this scale.  Aden had lots of Xs, and some of her /s from last semester had gone up to Xs.  Same for Mona.  There is also a list of behaviors that get graded with a U, an S, or an R (for Usually, Sometimes, and Rarely).  They each had a U for most everything, and a few places had upgraded from an S.  I seem to recall Mona getting a bunch of Ps at some point and I still don't remember what those were, or if I was supposed to be Pleased or Perturbed by them.  Anyway, both girls had nice comments from their teachers saying they are working hard and getting along well, so that's great.

K5 is graded differently, so Quinn's report card took me longer to figure out than his sisters'.  One page of it had a long list of categorized skills, but he was graded on a scale that went from 1 to 3, 1 being good, 3 meaning needs work.  The second page was general areas like Reading and Math and they were scored from 1 to 4, but this time 1 was minimal and 4 was advanced.  So on one page you want to see 1s, and on the other page you don't.  I have no idea why they don't use the same system for the kindergarten students as they do for the older kids.

In any case, Quinn's report card had a few things on it that took us slightly by surprise.  But his classroom has had a lot of upheaval because his teacher moved away at the winter break and other than saying a brief 'hello' at the pickup we have not really met his new one.  She seems very nice and Quinn likes her, but I don't know if she graded his report card or if his previous teacher did.  Regardless, it had things on it we didn't get.


Quinn and I went through his report card together the afternoon he got it.  I showed him how to interpret the scores, and he immediately zeroed in on the three items where he did not receive a 1 on the first page.  The only places he received a 2 were in Shapes, Naming Oceans, and Music.  He got very excited because he likes to learn and these apparently were the things he needed to catch up on.  Quinn was bound and determined to master those items that very night, so we set to work.

According to his report card he needed to know 15 additional shapes.  15 shapes?!  I was having trouble coming up with the names for 15 shapes, so I went online and found a bunch, and the only ones Quinn did not know how to draw were a Heptagon (7 sided figure), and a Trapezium (which sounds like play equipment for chimpanzees to me).  He knew the Curvilinear Triangle and the Quatrefoil and all kinds of other peculiar things, so I'm not sure how he didn't earn a 1 in Shapes, but he was excited to draw them all and seemed satisfied that he could be safely quizzed on his shapes in the future.

Next was Naming Oceans.  This was baffling because the boy knows geography.  He gets so excited by maps I can't even tell you.  He tries to hug them when he sees them in a book.  Anyway, if there was ever a kindergarten kid who could name you some oceans it's Quinn.  So we looked at the map puzzles he happened to have out on the living room floor already, and I asked him to find all kinds of bodies of water for me in addition to the oceans.  Hudson Bay, the Gulf of Mexico, the Baltic Sea, all the Great Lakes... He knew them all and even told me before we ever got near the map that Egypt touches both the Mediterranean Sea and the Red Sea.  So I'm assuming something went goofy the day Quinn got his ocean knowledge assessed because there was nothing to work on there.  I'd put Quinn's geography knowledge up against most adults' so who knows what happened?  But Quinn asked if he could check off Naming Oceans from his list and I said sure.

Last, and most embarrassingly for me, was Music.  Music!  This is along the lines of my father, the French teacher, not realizing until all three of his children were out of college that none of us spoke French.  At least I caught it with Quinn at age six so there is time to address my lapse.  I'm not sure what sort of musical skills they are expected to have in class, but when I told him I could teach him something about music he said he wanted to know how to read real notation so he could find notes on our keyboard.  I drew him a staff and showed him the basic note names, and then I showed him how to find the corresponding notes on the keyboard.  I ended up writing out Mary Had A Little Lamb and Twinkle Twinkle Little Star in C major for him to play, and he was so excited to be finding notes himself and making music that he agreed to try real piano lessons sometime.  He's never shown any particular interest in playing music before, so I'm excited.  I explained to Quinn that the way the bells are set up in his classroom is the same way the black and white keys are arranged on the piano keyboard, so he took his music with him in his backpack and tried it out at school the next day.  He reported back that lo and behold, it worked!  He could play those songs on the bells, so he decided that should qualify him as caught up as far as his report card was concerned.

So that was fun.  If he'd had all perfect scores we wouldn't have been inspired to work on anything in particular.  I can't imagine anyone will ever look at his K5 report card after he's moved on to first grade next year, so it could have said almost anything and I don't think it would have mattered.

I know firsthand from my own history in school how little grades can mean in relation to what you know.  They still matter because people need some way to assess the work of others, but they are far from an accurate reflection of ability.  The kinds of things Quinn likes to challenge himself with are easily tested.  He likes learning his times tables.  He likes drawing maps and labeling all the countries of Africa himself.  He likes learning new words and using them properly.

Mona's use of language is more fanciful.  She does math in a highly visual way.  Most of her memorization power has gone into learning detailed facts about animals which rarely come up on a standardized third grade exam.  She doesn't test as well as her brother, but if the test were to QUICK!  MAKE A DOG!  Well, Mona would be off the charts.  She needed a birthday present for a friend on short notice yesterday and in less than an hour she whipped up this guy: 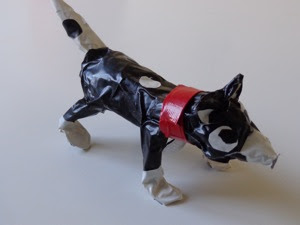 So I worry about Quinn in school in that I hope he's being challenged enough, and I wish Mona's spelling were better, and as Aden gets older I fear a little for the interference the distractions her social life may bring to her schoolwork, but I don't worry about grades (or Xs or 2s or whatever marks get used to quantify their performance).  I want my kids to do well in school because I want them to do well in life.  But it's more important to me that they enjoy school, because I want them to enjoy life.  I'd make a terrible Tiger Mom, but on an average day I think I make a pretty good parent.  I don't know how much credit I can actually take for what my kids do, but if anyone wants to grade me based on the people my kids are at the moment, that's a report card I'd be proud of.