An (Unsponsored) Plug for Home Depot 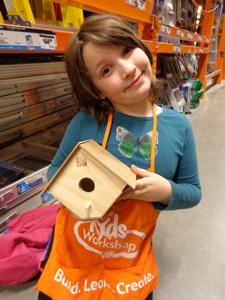 I don't do sponsored posts, but I don't have a problem with mentioning products or stores by name that I have experience with.  We've had some pretty good experiences lately with Home Depot, and I want other people to know about their kid project program, which is one of the smartest promotional ideas I've ever seen.

On the first Saturday of every month Home Depot runs a free workshop for kids.  They get an apron to keep, a project kit and space to work, and a pin to go with each completed project.  The projects are simple, like a small pin-board or a birdhouse, but they involve wood and glue and a hammer and nails, sometimes a screwdriver, and usually paint.  My kids have been doing this for about a year now.


The genius of this from a marketing standpoint is that you get families into the store to do something free, it's likely they may buy something else they need while they are there, they develop good feeling about the store in general since it made kids happy, plus you get kids using tools and developing skills to make things which means they are more likely to be future customers themselves one day.  All very smart.

So I'm not blind to how this plays into the hands of the company, but that doesn't make it any less fun.  My kids are excited every month to head to Home Depot and do the next project.  We've even gone to a different one in Michigan while we were on vacation because the kids didn't want to miss out.  There is better seating at our Home Depot in Milwaukee, but the one in Michigan gave out cookies. 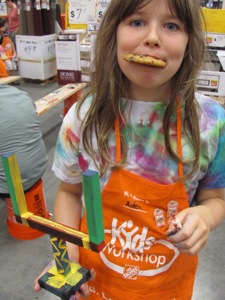 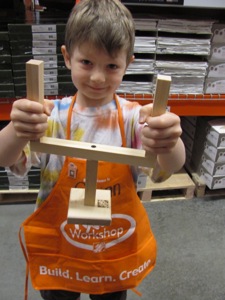 I like seeing my kids do something where they follow instructions, sometimes making decisions to deviate from them a little to achieve what they want.  Aden is always proud to have done the whole thing without help. 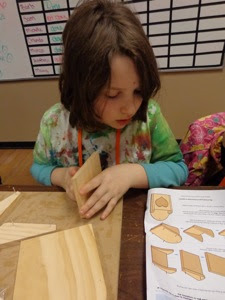 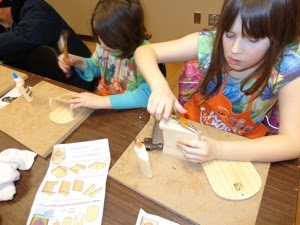 One of the most elaborate project mornings was the one for the toy fire truck.  Everyone got hats, they had a real fire truck on hand for kids to see, there were fire safety materials and coloring books, and two horses for some reason. 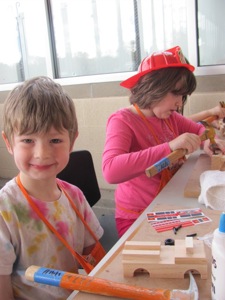 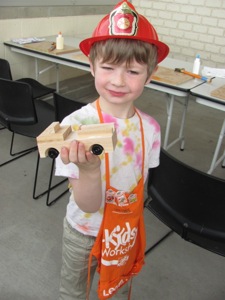 The only complaint my kids ever have is that the painting station only offers those clumsy sponge brushes.  Aden in particular manages to get some nice results with them anyway, and Mona will occasionally opt to just paint things at home.  Quinn never paints his projects.
The only complaint I have is that someone needs to explain the point of the program to the teenage employee who has been gatekeeper to the project room the past few months.  I'm sure she feels she's doing the right thing by sticking to the letter of the rules, but the real aim is customer satisfaction and loyalty.  Two months ago Mona was excited because she had reached her tenth project and would get a special star pin.  When she proudly reported to the desk for her pin the employee said Mona had to prove she was up to ten projects by showing her all the right pins on her apron.  Mona explained that one of them had broken off, and the employee said that was too bad, no star pin.

Seriously?  The star pin doesn't mean anything and will impress no one.  It won't help get her into Harvard or show up on her permanent record or even get her farther ahead in the lunch line.  It only means something to the person who knows he or she earned it, and why would Mona lie about earning it?  Frankly, even if she did, who cares?  It's a cheap, silly pin.  If it makes her a customer for life they should just give it to her. 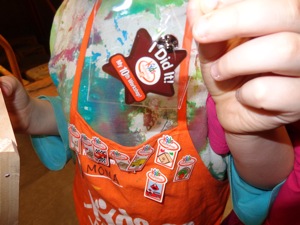 I was proud of Mona because she was hurt and on the verge of tears, but she held herself together and told me it was okay, because the next month the new pin would make ten that she could show, and she could wait.  And the next month she got her overdue star pin.

But one stick-in-the-mud teenager won't dampen our enthusiasm for building projects.  Being able to make things out of wood is one of my favorite things in the world, and I appreciate a program like this that opens that possibility to any kid who wants to try.

I don't know if any of my kids will follow in my footsteps and want to learn anything about instrument making.  I'm ready and willing to teach them if they decide to.  In the meantime I love the little boxes and birdhouses they create, and I like the pride they show in their work.  So good on Home Depot for such a nice idea.  (See you hammer in hand next month.)
Posted by Korinthia at 11:29 AM