I got to go to Alaska! 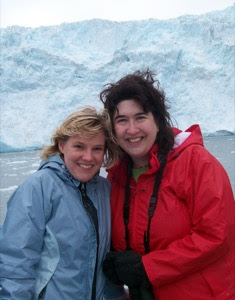 My best friend from high school, Gabby, and I started talking years ago about how when we turned forty we should take another trip together.  We had a wonderful time traveling for a month after college, well before husbands and kids and houses and real jobs.  We spent most of that month in national parks, doing our inept version of camping.  We were hungry and filthy but we laughed the whole time and had some great (although admittedly tame) adventures.

Last summer at her house while our kids all played together, I reminded her that we would actually, shockingly, finally be turning forty and needed to pick a place to go and a date to go there.  Open blocks of time along with a stash of disposable income don’t normally fall into the lap of the average parent, so it sounded like an impossible dream but one worth toying with for an afternoon.  We opened an atlas and traced our fingers over places both exotic and mundane, trying to imagine how we’d fare in places like Thailand or New Zealand or Saskatchewan.  And then we hit upon Alaska.

Who doesn’t want to see Alaska at some point in their lives?  It sounded adventurous without actually being so.  Far away, but no passport needed, different but still somehow the same…. One of the things that tends to happen when you’re raising small children is avoidance of major risks.  I have to be around to raise my kids so I won’t be experimenting with skydiving anytime soon.  My mom told me once when she was in the rain forest a couple of years ago with one of my brothers that she was supposed to climb a spindly observation tower with him, and she hesitated before having the revelation that she was no longer raising small children and she was free to risk her life for a change.  (I pointed out that if anything happened to her my dad would be dead in a week, so she’s still pondering that one.)  We decided Alaska, at least in our imaginations, would be the place.

Then we got the news Ian would be going back to Iraq.  Suddenly a trip away with my friend for a week didn’t sound so selfish or impossible.  It sounded like a reward in advance of a long haul raising the kids on my own again which I knew meant putting most of my interests aside for a year while being anxious and tired.  It also meant he’d be earning a steady income while away, and plane tickets to Alaska and a rental car weren’t looking as expensive.  Ian told me we should do it, that he and the kids would miss us for a week, but I should have a great time just being away from our day to day life for awhile.  That there was lots of day to day life in my future so I should do something I wanted just because it was fun.  My only restriction was we had to go before his deployment date in September.  Gabby had to do some fancier planning on her end so that her three kids were cared for while she was away, but we found a week that worked and off we went!

We had a travel agent up in Anchorage arrange some hotels and activities so we wouldn’t waste too much time simply hunting for a place to sleep every night and figuring out what was available to do.  It was such a grown up trip.  A far cry from sleeping in the car in hotel parking lots and munching on cold pop tarts.  That was fun, too, but showering is so nice.  Gabby’s husband was worried about us somehow wandering off into the wilderness and dying so he sent an emergency GPS tracking device along with us.  As we ate at a buffet of salmon and prime rib after a boat tour of the Kenai Fjords we debated if that was an appropriate time to hit the emergency distress beacon.  (What?  They are low on rice pilaf?  Hit 911!)

What an amazing time!  We saw grizzly bears in Denali Park (from a bus, thankfully): 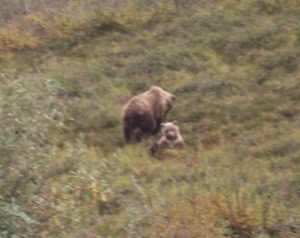 And the dots in this picture are caribou: 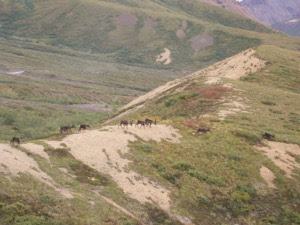 We also saw bald eagles and humpback whales and an otter and sea lions and harbor seals and a trumpeter swan and puffins and a fox and a squirrel.  (If my kids had been there they would still be talking about the squirrel.)  In Seward there is a crazy population of puffy slow looking pet rabbits that someone set free years ago and somehow they survive and hop all over town.  We’ve had pet bunnies, and they are funny and fascinating, but they are not the brightest bulbs in the food chain bulb box if you know what I mean, so I’m stunned that any of them have found a way to survive the winters in a place that most of the people don’t even stick around for. 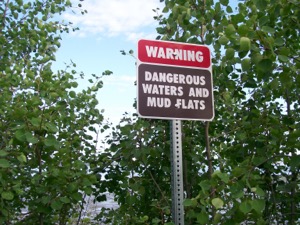 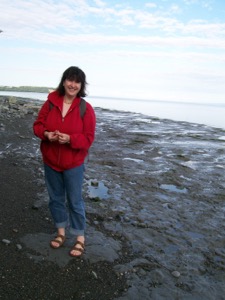 And there were other hazards that almost caused us to push the emergency beacon but we ended up going to gift shops instead: 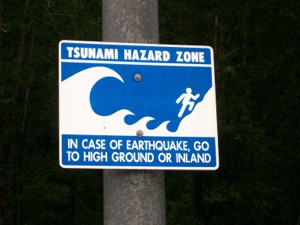 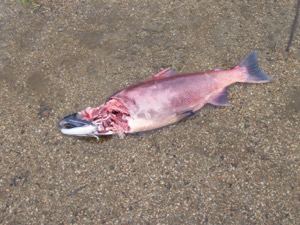 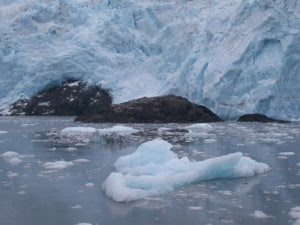 Things I didn’t know:  Alaska has an average of 14 earthquakes A DAY.  Bears just eat the brains out of the salmon they catch.  Salmon after they spawn don’t taste good.  Puffins are only colorfully cute when they are living on rocks during mating season–out at sea they are just brown and grey.  If you spot a moose you are supposed to run (away).
We ate Mexican food in Wasilla, we kayaked over salmon, we white-water rafted down eleven miles of the Nenana river, and we got to sit in a boat next to the end of a glacier for about half an hour and listen to it.  Glaciers sound like thunder and gunshots and shivering next to one with one of my oldest friends (she is forty, you know) for part of an afternoon is now one of my favorite memories.  It was a great trip and we even laughed some of the time.  (Okay, most of the time and so hard we almost missed the biggest wave on the rafting trip until the guide pointed it out and told us to hang on.)  It was awesome.

Where is the parenting element of all of this?  I think sometimes it’s healthy to miss your kids for a bit.  I enjoyed buying crackers and cheese from the store that they wouldn’t eat, and finishing not just sentences but whole conversations with an adult, and reading a book out loud about zombies instead of ponies, but by the end of the week I couldn’t wait to get back to my kids.  It was just the break I needed to appreciate how lucky I am to spend time with such sweet interesting people.  They all seemed so much older after a week away, and I felt like I’d missed out on a piece of their lives.  Instead of trepidation about becoming the full-time parent again, I’m actually a little excited.  It feels more like the privilege it should be rather than the chore it sometimes gets reduced to when life becomes an endless treadmill of laundry and dishes and cleaning.  It does help to step back in order to get perspective, and I got to step all the way back to Alaska.  I’ve had my break and I’m ready to hunker down for Ian’s year away.
Posted by Korinthia at 10:24 PM