Technically, blogging is new to me, although anyone in the long list of friends and family members who have been receiving my mass emails for years will tell you otherwise.  They already know the cast of characters I write about, but the Babble audience could use some introductions, so I’m going to go in order of age starting with my baby (who is quick to remind me he is NOT a baby).

Quinn is 2 (but I guess in baby speak he is 33 months).  If I know nothing else in this world, I know that the boy loves me.  He would do nothing but lounge in my lap and smile all day if I’d let him.  Not a day goes by that I don’t look at him with wonder and think about how we almost didn’t try for that third child.  I had two miscarriages after I had my girls, and as much as I wanted another baby I didn’t know if I could handle one more failed pregnancy.  I’ve never been more glad that I took a chance on anything in my life.  Quinn is adorable and funny and he rounds us up to the family of 5 I always hoped for, but I never imagined kids or a husband as remarkable as the ones I actually have.  I am a very lucky person and try hard not to take that for granted.

The two words used most often to describe my son are cute and smart.   Indulge me in a proud mom moment as I present evidence of both.


Here is proof of cute (off my husband’s phone):

And here is proof of smart (filmed by my brother at Christmastime):

Quinn was heavily into puzzles from about 18 months old until pretty recently.  I think he specifically liked map puzzles because with their clear shapes they were actually easier, and I know he liked that the individual pieces had names.  He used to be proficient at Asia, Africa, the United States, and most of Europe and Canada, but then his interest waned and now he’s just into things that are purple.  He has passing phases like that, where he dives in wholeheartedly, masters something, then lets it go.  Just after he turned 1 he was obsessed with sign language and could recognize probably over 100 signs at his peak, but now it doesn’t interest him and he seldom does signs for me anymore.  If I could just get him hooked on doing the laundry for awhile…. 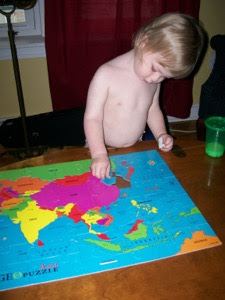 Of all my children, Quinn is the one who shows the most impact of birth order.  He would not be the same person he is now if he did not have 2 strong older sisters.  At the moment he shares their room, and his life has always been about following them around and keeping up with what they do.  If he’d been born first he would still have been cute and smart, but I honestly can’t imagine him with his sisters out of the equation.  For him the house has always been full of playmates and toys that aren’t his and he’s always had someone to share the tub with.  As long as one of them isn’t climbing into my lap he adores his sisters.

I can’t predict how the upcoming deployment will affect him.  He was 9 months old when his dad returned from the last assignment in Iraq and he adjusted quickly, but this time is very different.  Ian has been the stay-at-home parent for the past couple of years, which means dad has been making the bulk of the decisions about what the kids eat and where they go and how they do everything.  Not only will they have to adjust to a parent being gone for a year, they will have to adjust to mom’s way of managing their world.  I suspect at first Quinn will be glad to have dad not around to compete for my attention.  On regular Army reserve weekends he is thrilled to have me by his side all day and doesn’t ask about his dad at all.  I have a feeling he will begin to notice the things Ian contributes after they have been missing for more than a week.  He lets the kids take way more risks on the playground than I’m comfortable with, I don’t do horsey rides, I’m no help with their computer problems, and there will be no more cake batter for lunch (not that that happened often, but the likelihood with me around will drop to zero).

I hate that Ian will miss nearly all of Quinn being 3.  Despite the whining, I have always loved age 3.  That’s always seemed the age to me when kids are the most uninhibited and expressive and you get a real glimpse of who they are.  I will take a lot of photos and video footage and hope that Ian doesn’t feel too left out.