When people ask if we have boys or girls, my husband usually says, “We have one of each:  A boy, a girl, and Mona.”

The most common phrase I hear from people after they’ve spent time with my middle child is, “Mona is interesting.”  They say it in an amused and astonished way that I understand.  I find Mona interesting, too.

Mona is 5. She starts full-day kindergarten in the fall and she’s very excited about it.  In half-day kindergarten her best friends were the bad boys–the ones who were always made to sit out of snack time as punishment.

The first thing that strikes people about her are her sartorial choices.  I’ve had several moms tell me at the half-day pickup at her school that they can’t wait to see what outfit she’ll be wearing when she comes out with the class.  There was a hat phase, and a coat in hot weather phase, the bathing suit in winter phase, and any day is fine for a costume in Mona’s world.  I remember one day in May she went with me to Target in a bathing suit, rain boots, winter coat and a baseball hat.  She was ready for anything.

Here are some photos I grabbed somewhat at random off my computer from over the past couple of years.  Keep in mind not one of them is from Halloween: 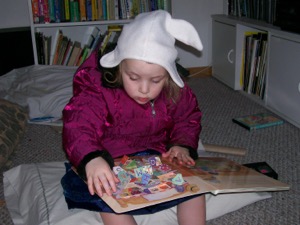 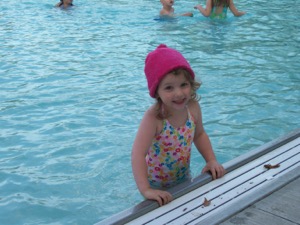 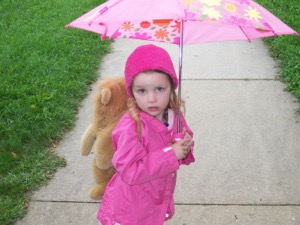 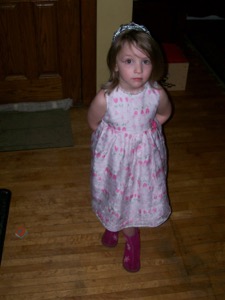 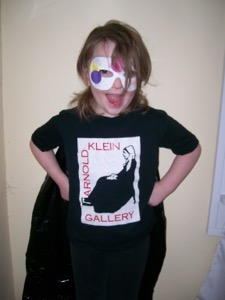 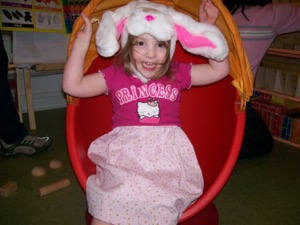 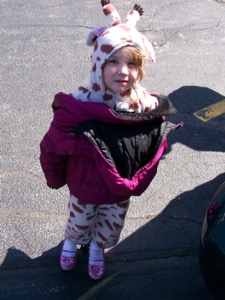 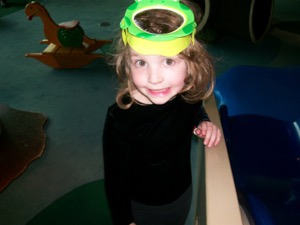 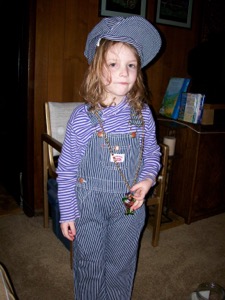 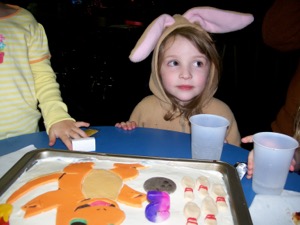 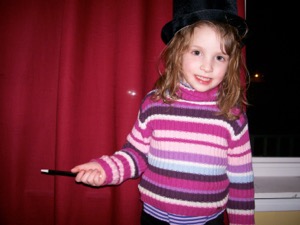 When I told people I was expecting a boy when I was pregnant with Quinn, many of them said something along the lines of, “Wow!  You are not going to believe the amount of energy a boy has!”  And all I kept thinking was, “It can’t be more than Mona.”  So far Quinn remains most like his sister, Aden, in energy and mannerisms, and Mona the middle child reigns supreme in feats of crazy physicality in our home.  She’s the climber and the jumper and the one who could spend all afternoon chasing her shadow around the block. She was crawling at 6 months and walking at 8 months, and she practices unusual walks and different facial expressions.

Mona wasn’t interested in talking for a long time.  During her toddler years she communicated mostly through a system that her dad and I referred to as interpretive dance.  When people tell me they aren’t surprised by how articulate Quinn is at such an early age because he has older siblings to model after, all I can think is, “Yes, but how does that explain Mona?”  But there is no explaining Mona.  She adores her older sister who speaks clearly and well, but didn’t emulate any of those traits for a long time.  Mona was always Mona and she does things on her own schedule.

She is the most internally motivated person I have ever known.  Disciplining her was always a challenge because there was nothing to take away; her favorite thing has always been herself.  For a long time rewards didn’t work either because nothing was as interesting as simply jumping around.  Luckily I’ve only had to battle with her on very few issues which I had to win, and for the most part it’s been fine to let her live in her own little world (which seems to operate about ten minutes in the future from our own).  She has managed to reduce me to tears of frustration in public and yet also makes me laugh every day.  She gives amazing hugs.

I don’t think Mona remembers her father’s last deployment.  She was younger than Quinn is now when he left and I think memories between ages 2 and 4 are hazy for most people, even 5 year olds.  I know she remembers certain things that happened, but I don’t think she associates anything from that time with her dad being in Iraq.  They are just memories of familiar things.  This time she will be far more cognizant of what is going on, and I know she will miss her dad.  But Mona adapts quickly.  As long as I’m there and she has her sister to follow, she may come through this experience better than any of us.  Of course, to say the girl is hard to predict is a vast understatement.  She surprises me all the time, so I suppose it’s possible she’ll melt down when her dad leaves in September, but I bet she’ll do okay.

Raising Mona is like living with a circus act.  I feel sometimes as if I’m observing her while peeking from behind my hands–afraid to watch and even more afraid to look away and miss something great.  People often observe Mona for awhile and then shake their heads and say they don’t know how we live with all that wacky energy, but honestly, I’m not sure what people without a Mona do.  Life without Mona would be very dull, and we’d have much less to talk about here.
Posted by Korinthia at 10:58 PM