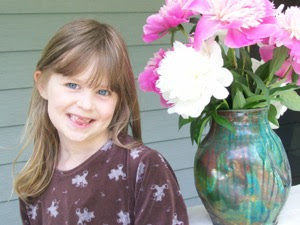 Aden was my first baby.  Unlike my younger two children who want to be acknowledged as big kids, she doesn’t mind at all that she’s my baby.  She still curls herself into the smallest ball she can and tries to tuck herself into my arms as if she were a tiny bundle.  Her lanky seven year old frame doesn’t fit in my lap well anymore, but she still likes to be cuddled and cooed over and adored.  I’m happy to oblige.  I love my Aden.

We picked out her name many years before she was born.  During the first phone conversation I had with my (now) husband in college I tried to stump him by quizzing him about things on the world map by my bed that I was sure nobody could just know.   He knew everything I could throw at him, and my last ditch attempt was to ask him the capital of Yemen.  “North Yemen or South Yemen?” he wanted to know.  I hadn’t even noticed Yemen was divided, but I picked south because it sounded more obscure.  The answer was “Aden.”   At some point ‘Aden’ became the placeholder name for the imaginary child we might someday have, so when she finally came along she couldn’t be anything but ‘Aden.’  Anyone who has been within earshot of any playground in recent years knows, however, that the name Aden/Aiden/Aidan/etc. is about as popular as it gets right now, which seems deeply unfair to us having picked it out at a time when it didn’t crop up anywhere, but our daughter has been the only girl we’ve run into with that name.  In school she is commonly referred to as Girl Aden.


Aden is both serious and silly,  She has an excellent vocabulary and a scientific mind.  She negotiates everything (which is sometimes maddening), constantly looking for loopholes, and it’s easy to imagine her as a lawyer one day.  Although if you ask her she’ll currently tell you she wants to be an astronaut, a scientist, an animal rescuer, and a Pokemon expert.  She’s also very artistic and has recently started the violin which she has lovely instincts for.  I knew if any of my children played the violin people would assume I made them do it, and if I’ve learned anything from all my years of teaching private lessons it’s that it has to be the child’s idea for it to be a positive experience.  I let Aden beg me for a violin for a year before I finally said, “Well, okay, if you MUST play violin….”  I found her a wonderful teacher (I decided not to teach her myself because there is only so much the mother-daughter bond can take) and it’s one of the greatest joys of my life to hear her play the violin.  I promised her when she’s ready for a full size instrument I’d build her something special.  (Being currently obsessed with narwhals, she has visions of something with a narwhal for a scroll.  I’m not sure if that’s something I can sell if she ever tires of it, but it would certainly inspire some interesting coversations at the Violin Society of America conventions.)


She’s going into second grade this fall and she’s convinced it’s going to be overwhelmingly hard compared to first grade.  I’m not sure where she gets that impression since she’s in a mixed aged Montessori classroom and can see that the second graders aren’t doing anything impossible, and the teacher who indulged her drawing narwhals on all of her assignments is the same one who I’m sure will let her draw narwhals on everything this year as well.
My oldest child is incredibly sensitive.  I remember reading somewhere when she was about a year old that children don’t develop empathy until age six or seven.  That struck me as ridiculous because Aden showed empathy from very early on.  I once cried while listening to a radio story when she was 4 months old and she touched my face and burst into tears.  (Now, when I had Mona I decided that if she develped empathy by six or seven I would be thrilled, so maybe that concept has applications after all.)   I have to be very careful about displaying my emotions around Aden because I don’t want to upset her unnecessarily. The problem is she doesn’t let me remove myself from the stituation.  She wants to comfort me the way I comfort her, so sometimes I just have to let her.  When I had my first miscarriage and couldn’t stop crying she tried to understand it as best as her four year old self could manage.  After sitting with me and stroking my hand didn’t help she ran off and got one of her baby dolls.  She put it in my lap to hold and said, “Here, Mama.  This baby won’t die.”  Looking at the remarkable child I had instead of focusing on the one I’d lost is what got me through that ordeal.

Aden is the person I am most worried about during the upcoming deployment (husband at war aside, of course).  I know last time she picked up on my own anxiety and frustration and sadness and reflected it back at me.  I am resolved to try harder this time to have a better outlook and thereby take some of the stress off my daughter.  Aden can be incredibly strong but I hope not to lean on her too much.  I’m glad we will have each other as we await her dad’s safe return.