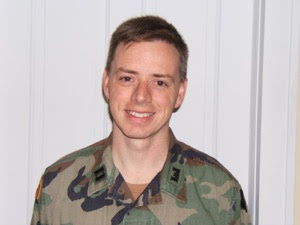 My husband is remarkable and I need to take a few moments to praise him.  (And for the truly observant who notice the captain’s bars on his uniform in this picture, it was taken the day he came home in 2007.  He’s since been promoted to major.)

Often when people find out he’s in the Army and has served in Iraq they make a point of telling me to thank him.  Usually it’s people who have never met him, and they use words like hero.  I agree, but not for all the same reasons.

Ian’s is the ultimate stay-at-home-parent struggle in some ways.  In his job as an officer in the U. S. Army Reserves he has earned honors for his contributions and accomplishments, including a bronze star for his last deployment.  He is one of the smartest, kindest men I’ve ever met and exactly the kind of soldier we want representing us in a foreign land.  If anyone can find effective solutions for some of the problems the Army faces, it’s Ian, so he deserves whatever recognition he gets.

But the really hard work he does is staying home with three kids, and there are no medals for that.

No one wants to shake my hand in awe when then they hear he stays on top of the laundry and manages play dates and gets dinner on the table night after night.  My father took me aside during a visit to our home once, and said, “Ian is amazing.”  My dad admitted he wouldn’t have the patience for handling Mona or keeping track of Quinn or negotiating endlessly with Aden.  Ian shouts more than he’d like (we’re constantly explaining to the kids that they are teaching us to shout by not doing what we ask the first 4 or 5 times when we ask nicely) and tells me sometimes he wishes he could do better, but that’s just being human.  He has done the endless driving back and forth to school and has no problem grocery shopping with all the kids in tow.  He takes them to violin lessons and choir and swimming and birthday parties and dentist appointments and the zoo.  He clips nails, gives baths and knows all their friends’ names.  He does all of this knowing at the end of the day when I come home they will run to me and say they like me best.  If the situation were reversed I couldn’t handle it.  I would find a way to withhold ice cream out of spite, I’m sure.  Ian just shrugs and says, “YOU still love me, right?”

And I do.  Ian is my best friend and the person I trust most in this world.  He’s smart and funny and he makes me feel beautiful even when I haven’t bothered to run a brush through my hair.  My day doesn’t feel complete until I’ve had a chance to tell him about it, even if it’s just to describe a funny scene I watched on The Office or to remind him we need eggs.  When he was gone for 15 months during his last deployment I felt ungrounded.  My days floated together in a way that was unsettling.  I felt less real.  Ian enables me to be more myself when we’re together.  He clears obstacles from my path so that I can accomplish more.  He’s told me I create beauty that the world needs and I should be given the freedom to do that.  He made it possible for me to go to violin making school, and our violin store would not exist except for his hard work.  Thanks to him I’ve built instruments, written novels, and performed some wonderful music.  Without him I’ve discovered I turn into a cleaning machine and a nag.

I can’t stand that he’s leaving.  He loves me enough that if I put my foot down and told him to stay I know he would.  The problem is I love him enough not to do that.  He has supported me in everything I’ve ever wanted to do and has dedicated a good portion of his life to making my dreams a reality.  How can I not do the same for him?  I don’t fully understand the part of him that chose to be an Army officer, but I would never forgive myself for denying him something that he found important.  I don’t want him to resent me or regret his decisions.  I want him to look at me and feel I help him be his best possible self.  I want to clear obstacles from his path, too.  I love him and will support him from home as best I can.

It’s going to be a long year.

Posted by Korinthia at 9:27 PM