I made a hastily arranged trip to DC recently in order to attend part of a VSA (Violin Society of America) convention.  It's an off year (meaning there was no makers' competition which is a much bigger event and lasts a whole week) and I wasn't planning on going, but I won a lottery for a special pre-convention tour that was too good to miss.

Thankfully I have friends in the area who were willing to put me up and drive me around which made the trip even feasible.  (They also own one of my violins so I was able to at least offer some instrument maintenance in exchange--Although I have to say I found doing bench work at a kitchen table to be surprisingly disorienting when I'm used to being surrounded by all the tools and light I need.)

The pre-convention tour, that was only available to a smaller group than would attend the full convention, included a trip to the Library of Congress in the morning, and the Smithsonian in the afternoon.  Both places have an impressive collection of rare instruments, including some of the most famous that Stradivari ever built.  I had the opportunity to study and play the collection in the Library of Congress many years ago, but have never seen the ones in the Smithsonian other than in photos. 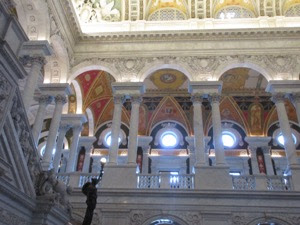 The Library of Congress itself is amazing.   I've been feeling depressed about the state of our country lately, and walking around that building restored some of my pride.  I love that a place so grand and exquisite is a public space, not a palace or a church but a monument to all human knowledge and creativity.  It was packed with people there to appreciate it.  We saw a Gutenberg Bible and maps drawn when everything past the Mississippi was still mysterious and everywhere literally from (and including) floor to ceiling was hand done craftsmanship to admire. 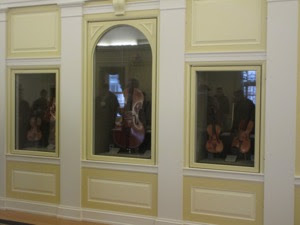 When I saw the instrument collection there back in the 1990s it was housed in the basement where I had to look at it under some pretty harsh lighting.  I'm sure the other instruments not currently on display are still there, but this time we found the instruments we were visiting mounted in cabinets in their own room with whimsical bars on the windows. 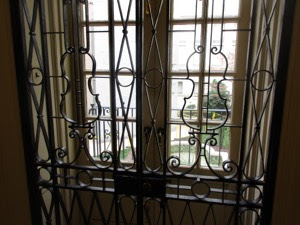 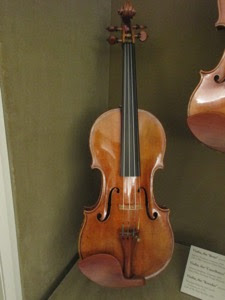 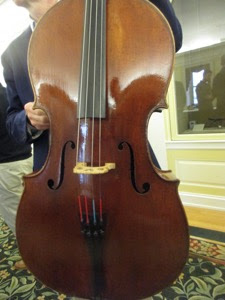 I'm glad we were given the chance to see the instruments outside of their display cases because otherwise they would have been nearly impossible to study.  I'm sure the average tourist is content to see a Stradivari in a case and call it a day, but luthiers want to peer closely at the corners, shine flashlights into f-holes, hunt for tool marks on the scroll, and turn the instruments to examine how the arching flows as light slips across those curves when they are in motion.

We got to see the Betts, the Ward, the Castelbarco, the Kreisler del Gesu... They're like old friends that you only know from pictures and connections on Facebook, so they are familiar but remote.  To really see them and learn something you can only discover in person is a delight and a privilege. 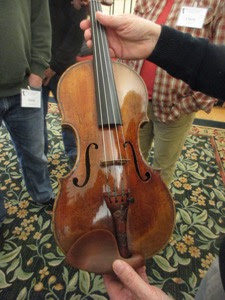 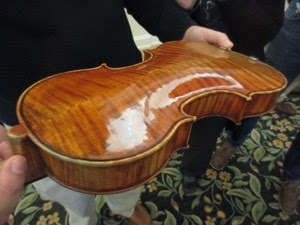 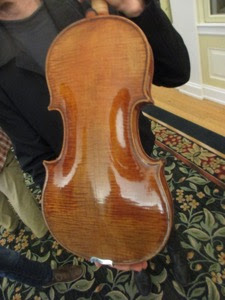 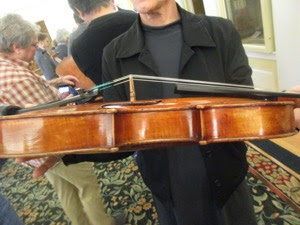 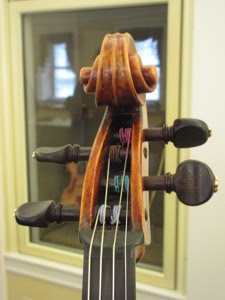 After lunch we headed over to the Smithsonian where we were treated to a rehearsal on instruments in the collection there.  They performed a Mozart quintet (extra viola!) on Amatis which was lovely.  Afterward they laid their instruments out on a table for us to study, and they also brought out other instruments, including the decorated Strads, the most famous of which is probably the Ole Bull. 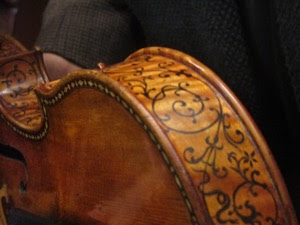 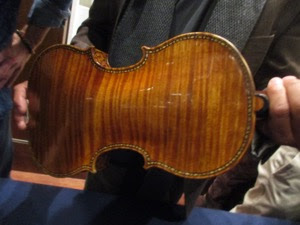 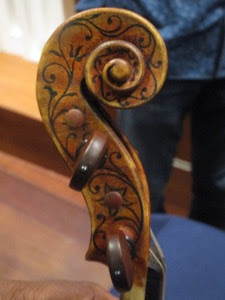 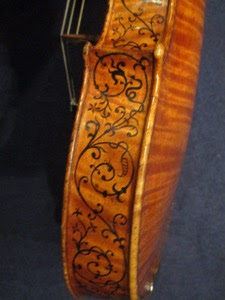 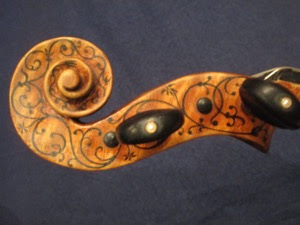 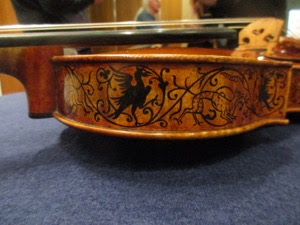 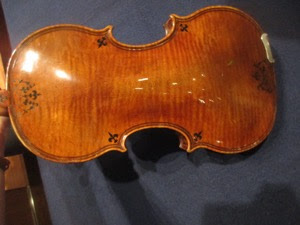 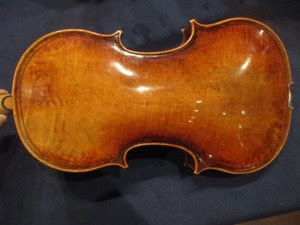 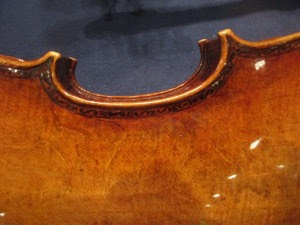 I never cease to be surprised at how much it matters to see things with your own eyes.  For instance, I've never seen a reproduction of Gustav Klimt's painting The Kiss that does it any justice at all.  I saw it the first time as a child in New York, and again in Austria after college, and in between I looked at posters and cards and books that tried to capture any of its beauty and never came close.  When I saw it in person again I was reminded of why I was so captivated by it the first time.  It had come to seem overrated, but it isn't.  It has a life to it that can't be held in a photograph.

The decorated Strads are the same way.  They are popular objects admired by many, but from a luthier's perspective they can seem a bit much.  In life, however, they are charming.  The scale matters, the way they look in three dimensions matters, and the feel of them matters.

I don't remember how long we got to spend in that room going back and forth between the Amatis and the Strads, but most of us would have stayed there all night had they let us.  What a wonderful opportunity.

The rest of the convention for me was highlighted by spending time with friends and making new ones.  I am always deeply nervous heading into such events because my full introverted nature rears up and I'm sure I will feel isolated and scared within the crowd, but then I remember the crowd is made up of individuals who make me laugh or offer hugs and are probably just as uncomfortable with the thought of a large gathering as I am.  Most luthiers I know are happiest when taking that satisfying first swipe with a freshly sharpened plane blade, clamping a perfect glue joint, pulling a varnish brush across a maple back, or just being alone and organizing their tools.  Those aren't moments that translate well to a group setting.  But being with like-minded people who understand those moments?  Who smile when you talk about honing stones or Japanese saws?  To be surrounded by people and instruments and not have anyone ask you what wood violins are made of?  That is like a miracle, and well worth the trip.

I really had to stop and marvel at what inspiring, kind, and talented people I know.  I need to step away from the news more often, because when I focus more on who and what is in front of me the world certainly looks far better.  Even during a luncheon for women in the VSA that had a #metoo theme I was moved by how far we've come in a relatively short period of time and by the positive direction we're going.  (More on that in the future--it deserves its own post.) 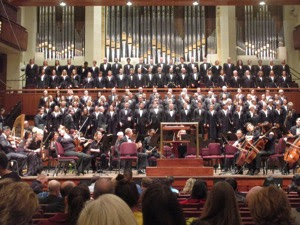 I also had the chance to see one of my friends from college perform at the Kennedy Center, I got to sightread some Corelli and Beethoven quartets one evening for fun, and just enjoy the pleasure of seeing another family I like up close doing their regular thing (which I always find interesting and reassuring). 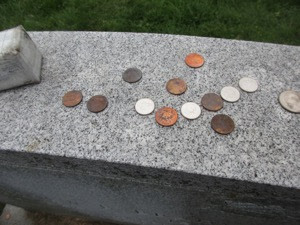 On my first day in DC a friend took me for a walk in the Congressional Cemetery near the Navy Yard where he works.  He described it as a "B-list Arlington" because it's filled with people like J Edgar Hoover and Tip O'Neill and Marion Barry.  There are two headstones for Mathew Brady, the newer of which was adorned with Lincoln-head pennies and some camera items.  Probably the most visited grave site is the one for John Philip Sousa, on whose headstone had been left a baton and a mouthpiece. 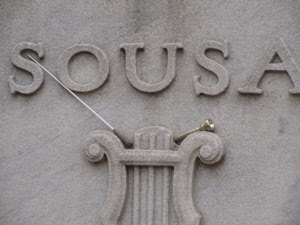 This cemetery is also a dog park, so among the bits of history both recent and old were cute pets happy to be running free and greeting new people.  It's an odd juxtaposition that I feared at first would seem disrespectful, but it was fine.  Happy dogs are life-affirming and cemeteries are peaceful places that lend themselves to contemplation.  Those two things go well together.

An excellent weekend and certainly worth all the trouble.   Not just because I got to hold treasures in my hands, but because I got experience moments of belonging and kindness and wonder.  And I got to come home to my own warm house and family that I love.  There are rare and beautiful things all around us, not just in glass cabinets.  We need to remember to appreciate them while we can. 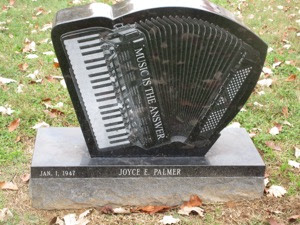