Happy Halloween!  It's been over for us for days, but I hope everyone else out there who has fun with it on the actual day has a good time. 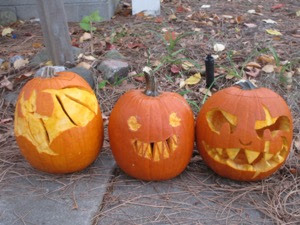 I'm interested in how widely Halloween varies anymore.  Maybe it always did, but with social media we get a glimpse in real time of what other people do in so many places now.  This year I seemed to be reading about how many people never get any Trick-or-Treaters.  I'm glad I'm not in one of those places, although buying the five giant bags of candy for the 300-400 kids we get at our door does add up.  We didn't have quite as many this year (and actually had a bit of leftover candy) probably because more people are going to hot spots, which we did too, actually.


Our kids start off on the blocks around our home and then we drive across to the side of town where the violin store is and enjoy the events going on over there.  On our street we have a house that decorates for events in every month, and this is the one time of year they blend in.  The dad in the house always juggles out front during Trick-or-Treat, sometimes while on skates and we love that every year.  Closer to the lake they have barricades up for nine blocks and it's just a nighttime Halloween party in the streets for all ages. The decorations in Bay View are way over the top for Halloween.  People put a lot of time and labor into creating amazing things, many for donations to different causes.  The big one this year that we took some time on Saturday night to really appreciate was a block where most of the houses have let themselves be part of one man's big vision to create a Nightmare Before Christmas theme.  I don't have any pictures that do it justice, but all of it is handmade and painted and lit beautifully and we were in awe. 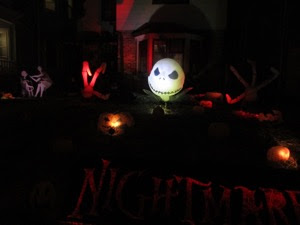 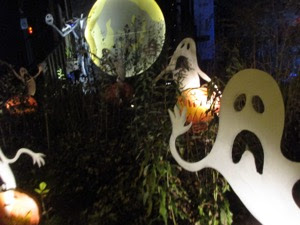 The only big disappointment this year was that the guy responsible for Zombie Hill moved, so no more zombies on the hill that appear in a trickle from the beginning of the month and cover the hill by the end of it.  He did donate his zombies to the Pumpkin Pavilion, though, so we still got to see the zombies, but it wasn't the same. 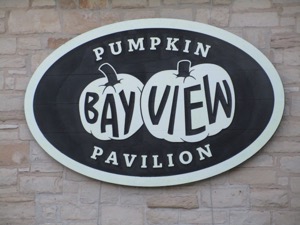 The Pumpkin Pavilion is an event put on by our neighborhood association in the local park in the middle of October.  We signed up for pumpkin gutting duty this year, mostly because we wanted seeds for roasting.  We ended up with WAY more seeds than we could possibly eat, so we roasted about 4 giant pans full, gave away three big ziploc bags worth to friends, and the rest we dumped in the side garden for either squirrels to enjoy or to start our own pumpkin patch. 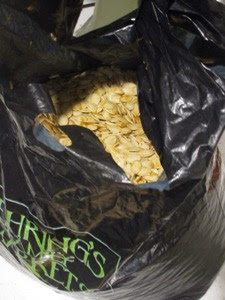 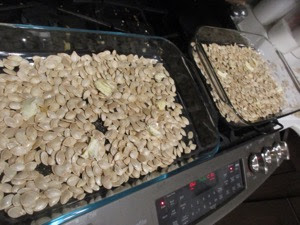 Mona carved a really nice owl on her pumpkin.  The rest of us were a bit pumpkined out after a couple of hours of gutting, but the kids all did carve their own pumpkins on the day of Trick-or-Treat (pictured at the top of the post). 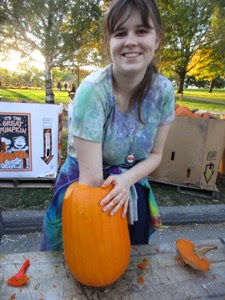 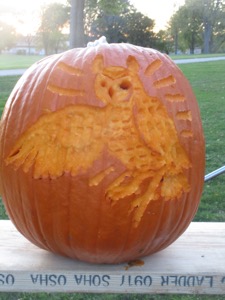 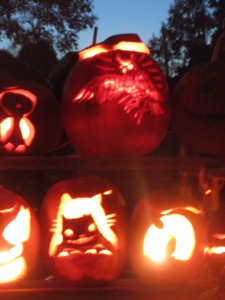 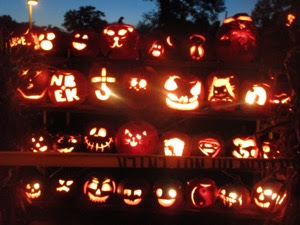 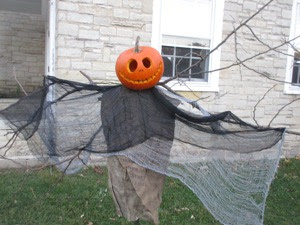 The decorations this year were great, including glowing giant jellyfish hanging from the trees.  The hundreds of pumpkins people carve are lit in a big ceremony the first night, and then they flash in time to the music when they play Thriller for the annual community Thriller Dance.  There are food trucks and a hay ride and bands playing and a magician inside where they also have games for little kids.  (We didn't go inside this year--it was crowded and my kids have seen all of that).


The kids went to the Halloween Dance at school on Friday, did Bay View nighttime Trick-or-Treat on Saturday, and then Sunday went to a friend's neighborhood north of us to participate in Milwaukee-wide daytime Trick-or-Treat.  Not so much for candy, but to get one more day out of their costumes.  Aden designed her armadillo costume to be lounge-able so she can continue to wear it the rest of the year, but the ostrich and lion fish costumes will pretty much have to be retired after this weekend unless some unusual event presents a new opportunity. 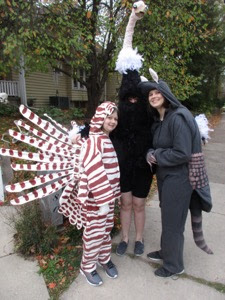 Speaking of candy, I had to school Aden that Baby Ruth and Three Musketeers are not the same thing (I noticed this confusion during the ritual sorting of the candy on Saturday night and was horrified by the lumping together of the two).  The kids also pointed out that most of their "Sixlets" candies had eight in a package.  And are Mounds bars gone?  Aden gives me all her Almond Joys since she's allergic, but she seems to have lost her allergy to coconut and I told her she could maybe try a Mounds then, and she said, "What's a Mounds?"  I always remember Almond Joy and Mounds bars being sold in fun size form together, but I looked around the candy aisle at Target last night and there wasn't a Mounds to be seen.  The funniest non-candy in the kids' haul were little plastic monkeys, and one house gave Aden a very nice little handmade pillow.  I suppose if I ever live somewhere that doesn't require half a dozen bowls of candy to sate the crowds I would do something like that.  Aden really likes that little pillow.

The only other thing I want to mention this Halloween is I don't think it's fair to equate something being old or out of date with being scary.  Every once in a while I think about my niece's birthday party at Jekyll and Hyde in New York, and how they had old black and white horror movie trailers on a loop on these old boxy TV sets, and I heard the kids commenting on how spooky--not the trailers were--but the old fashioned TV sets.  The TV sets I grew up with were clunky, but spooky?

Anyway, adding to that list is this decorative item at the fabric store, sure to frighten anyone who--I don't know, comes to your door?  Where would you put this?--a TYPEWRITER.  Because Ooooooh, scary. 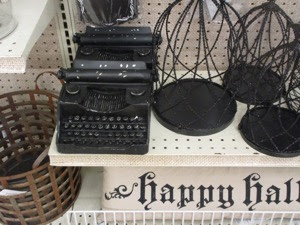 So I guess we could display our old rotary phone (that the kids sometimes still use) and scare away people when we run out of candy?  In any case, the fake typewriter gave us a good laugh the fabric store on one of our many runs out there for thread and fleece.

Happy Halloween!  It's also the anniversary of the day my husband and I met.  This is our 29th Halloween together.  (Including the ones where we were together but geographically apart.)  I still have the packet of pudding mix that was in my pocket at that Halloween party.  (Now, that's scarier than any fake typewriter.)

Posted by Korinthia at 1:16 PM