Mona is amazing.  And she makes amazing costumes.

I have really enjoyed making costumes for Mona, but a few years ago she decided to have a hand in her costume creation and did the head to her tapajera outfit without my help.  Then the following year she did most of her griffin outfit herself.  Last year she didn't need me at all and did her scorpion costume completely on her own.  (She still wears it and was a hit at Bug Day at the nature center recently.)

This year she outdid herself with an ostrich costume. 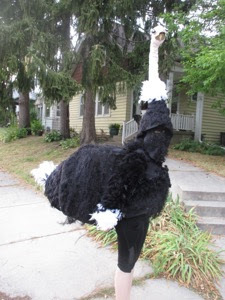 She was so excited about her ideas for it that it's already finished well in advance of Halloween.  It was fascinating to watch her work out how it would all go together. 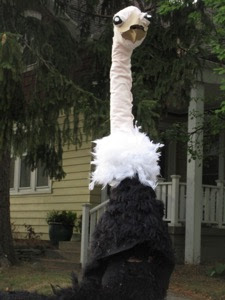 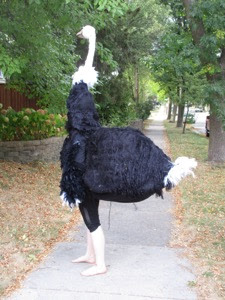 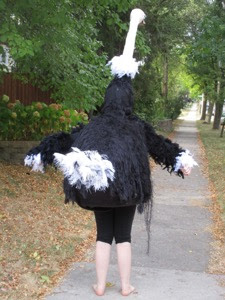 The frame of the body is an old hula hoop bent into an oval that her body fits in the front of, and the back half is reinforced with cardboard.  Then she added duct tape straps to wear it like suspenders.  She used cardboard tubes (we get lots of narrow string tubes shipped to the violin store) to construct the shape of the body then covered it all with fleece.  The tail feathers are actual ostrich feathers I found on sale at some kind of online centerpiece store. 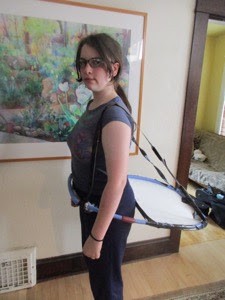 The wings are boas glued to a black shirt.  The feathery stuff on the body is a fluffy yarn we found at the craft store. 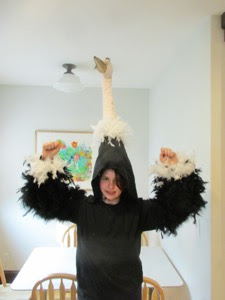 The neck and head are built around a long shoe horn we found at the dollar store covered with fleece and paper.  She mounted the whole thing on an old bike helmet, and then covered her face with a mask and a sort of veil-flap so she can breathe easily, and eat if she wants to without taking the whole thing off.

I am a bit sad that I don't get to make costumes for Mona anymore, but am so proud of her for doing such a spectacular job on her own.  Plus I think she did it better than I would have.  And frankly, Quinn's costume is really challenging this year, so I can use the extra time. 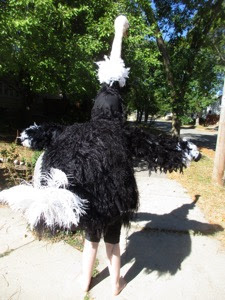 So if you live in Milwaukee keep an eye out for the trick-or-treating ostrich!  That's my girl in there.  And I love her. 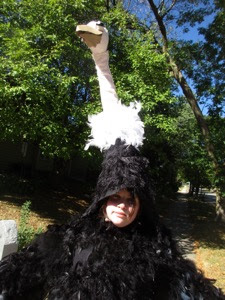 Posted by Korinthia at 3:09 AM