Looking Back on the 2016 VSA Convention

Before the past year slips too far from memory I want to take a moment to reflect upon the VSA convention I attended back in November.  It was quite an experience and I'm very glad I got to go.

2016 was a competition year.  The Violin Society of America (VSA) has an annual convention that moves around the country, and every other year they hold a competition for violin making with awards for workmanship and tone.  This year I entered my latest commissioned violin.

The convention was in Cleveland again.  I drove myself out there, and shared the drive back with my friend Robyn.  I loved having a few days alone in a hotel room where the bed magically got made every day and new towels just appeared.  (There are few things I envy the rich for, but maid service is one of them.)  I also enjoyed Robyn's company the last few days of the convention and sharing a room with someone who didn't need me for anything other than occasional grown-up conversations. 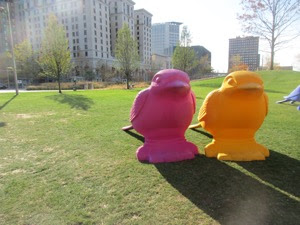 I like Cleveland.  The weather was unusually warm and sunny for that time of year, and I didn't have much opportunity to leave the hotel, but I did get a chance to wander outside one afternoon.  I admired the odd plastic sculptures scattered about the grounds near the lake, and I got a chance to look around their beautiful public library (which has a maker space inside!).  On the last evening there it was nice enough to even eat dinner with a friend outside at a restaurant.  (It was also nice enough that there was a well-attended anti-Trump rally to watch while we ate.) 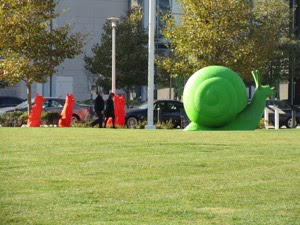 The convention itself was great.  There was a "Women in Business" breakfast which I appreciated, because being part of a minority in any field has its challenges.  I picked up lots of wonderful wood and varnish and tools in the vendors' room, caught up with old friends and made a few new ones, and attended a few really good lectures.
This year I also got to give a lecture (but in a small room--not the giant hall pictured above).  I shared my thoughts on setting higher standards for rental instruments, and I think it went well.  I got a lot of good feedback and questions.  The best part was the number of like-minded shop owners I met afterward who also see their businesses as more about relationships than profit margins.  I love knowing there are little shops like mine all over the country helping people make music.

One of the real treats at these conventions is the "Rare Instrument Room" which is an impressive assembly of generally privately owned violins that we're allowed to examine.  I went twice--once when it was rather busy, and once when it was quiet--and tried to learn as much as I could.  (I wonder if the other guests in the hotel realized they were sharing a building with millions of dollars of instruments.) 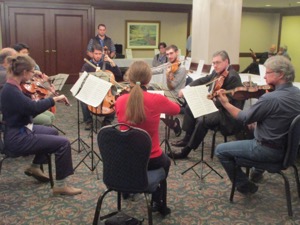 The other treat at these gatherings is the opportunity to play.  Most evenings the showroom of new instruments was open to anyone who wanted to sightread chamber music.  It ran until very late at night and I got to play with some really talented musicians.  I also got to play some music I've never tried before because we had unusual numbers of players available, so I got to read through two different sextets by Brahms that I didn't know that were challenging and very beautiful, and another by Dvorak which was wonderful.

Chamber music (particularly string quartets) is my favorite kind of playing, and I seldom get to do it anymore.  I used to do a lot of playing for weddings, but since opening my business I haven't had many Saturdays free, so that kind of ended that.  But even that isn't the same, because playing quartet music for a wedding is work where it's best to keep the music simple and most of it is about timing to coordinate with the event at hand.  Real chamber playing is complicated and challenging and immensely rewarding when you do any part of it well.  I didn't do it particularly well, but I hung in there, everyone was gracious and encouraging, and I loved every minute of it.  In my fantasy world there is always a bunch of chamber musicians happily tackling more music in a nearby room where you can pop in and join them on a whim.

The saddest part of the event was the absence of a maker I admire who is dying of cancer.  A couple of weeks before the convention I received a packet from him with information on understanding scrolls better that we'd talked about the last time we were in Cleveland.  He apologized for getting it to me so late, and then broke the news that he wouldn't be attending the convention because of his illness.  It's absolutely heartbreaking.  He was supposed to speak, but his lecture partner simply read his paper to the audience instead.  He donated several things to the scholarship auction, and I bought a set of violin wood that was from his collection and plan to make an instrument from it one day that I hope would make him proud. 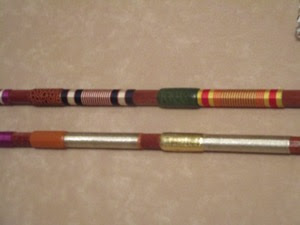 I went to a really informative talk about legal issues and violin shops, heard a couple of good panel discussions, and there were several interesting demos including one on creative wraps and grips for bows that were colorful and fun.  (They reminded me a little of military ribbons.)

The most unexpected thing to happen was that I won the raffle after the auction and got to spend some money in the vendor room.  I'd already purchased more than enough wood and tools, so I was boringly practical and splurged on a bit of fancy new varnish that I probably would have bought soon anyway, and more bow hair to use at the store.

But the highlight of the convention during a competition year is to see all the entered instruments laid out on tables once the judging is over and the awards have been passed out at the banquet.  It really is quite a sight, and the level of the quality of work over the past couple of decades has increased dramatically.  There used to be a lot more rough work and quirky things, but now with rare exceptions everything is really very good.

The instrument I entered was already spoken for, and the new owner actually came to Cleveland to pick it up.  He got a chance to see it in its spot on the display table and experience walking around the ballroom among hundreds of new instruments. 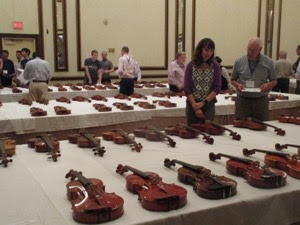 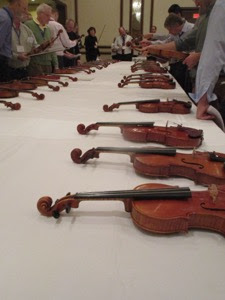 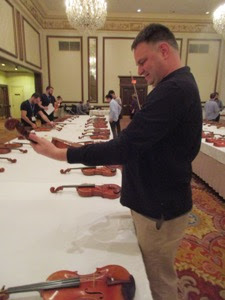 He even came along with me to listen in on my judge critique on the last day, and that made it more interesting.  To have the opportunity to look at all of it from an outsider's point of view forced me to stop and see it in a different way.  Having to explain things you take for granted makes you evaluate it all anew and tests what you actually know.  I enjoyed that a great deal.

So that's the gist of the convention.  I'm far behind on this blog and I'm sure there is much I left out, but life keeps marching on, doesn't it?  For the lucky among us it does.  I have lots of violin plans ahead that I'm excited about in this new year.  I wish you the best with whatever version of "violin plans" you have in your own life.