Whew.  We just finished birthday season, we hosted Thanksgiving, and we just started focusing in on the Christmas stuff.  I'm always amazed with how little room there is in our regular weekly schedule of rehearsals and lessons and appointments that we can cram in any more at this time of year, but somehow we do.  Here's a whirlwind recap mostly for my own record: 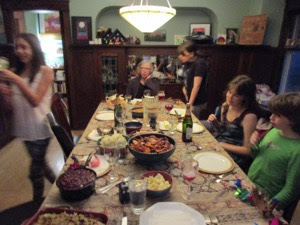 My mom, brother Arno, and niece were at our house for Thanksgiving this year.  The next day my brother Barrett joined us while his wife and baby continued their visit down in Illinois with her family.  It was a great Thanksgiving, despite it being the first one without my dad.  Thanksgiving is also my parents' wedding anniversary, so a certain amount of sadness was unavoidable, but overall we mostly had fun.  My mom did most of the cooking and everything was delicious, we played telephone-pictionary which is always hilarious, and we mostly just enjoyed being together.  I love having everyone in my house.

Mona made beautiful turkeys out of duct tape and paper for every person at the table.  Each one was different and I loved them all. 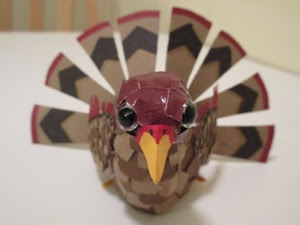 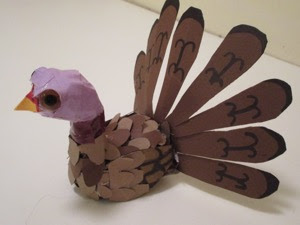 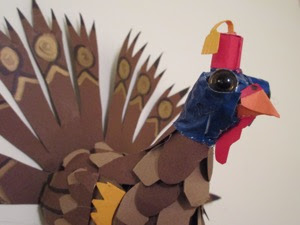 The weekend before Thanksgiving I got to play in a couple of Milwaukee Mandolin Orchestra concerts with the wonderful Evan Marshall as the soloist.  I was glad my mom was able to come out early enough to attend one of them.  Here's a performance we did of a movement from a Mozart concerto:

And if you want to have your mind blown by what one man can do on a mandolin check out Evan playing his arrangement of the William Tell overture: 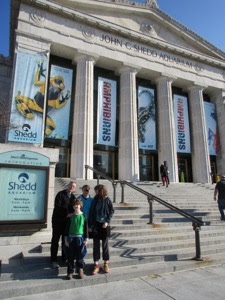 The weekend after Thanksgiving break was Mona's birthday.  I surprised her with her turtle cake on her actual birthday, and then on Sunday instead of a party (which she wasn't interested in this year) we all went down to the Shedd Aquarium in Chicago where we had signed up for a behind the scenes tour of the shark feeding.  It's a beautiful aquarium, and someplace we'd never been (which made Mona happy because she likes new experiences).

It was fascinating to see how they feed the sharks.  Each species learns both a visual and audio signal to let them know when it's their turn, and they come right over to the staff who record exactly how much they eat and make sure they get enough vitamins.  The favorite treat was a "squid roll" which was a squid stuffed with small fish.  We saw zebra sharks wiggling inside eggs, learned the animals at the Shedd get the first pick of the seafood in the city each day (ahead of the finest restaurants), and at the end of the controlled feeding we each got a turn at throwing food into the giant tank. 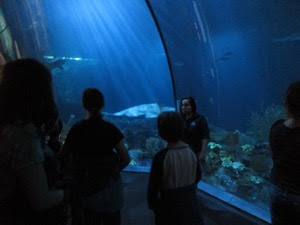 (A side note about going to the Shedd: Technically you had to be at least ten years old to participate in the shark feeding tour, but that seemed arbitrary to us since Quinn met the height requirement, so we decided to do it anyway and told him if anyone asked he was to say he was ten.  The whole week before the trip to Chicago we would turn to him at random moments and say, "Hey, my name is the Shedd Aquarium!  How old are you?" and Quinn worked at answering, "Ten!" without looking like his pants were on fire.  Of course nobody asked, and nobody cared, and there was one other boy on the tour who was obviously younger than Quinn anyway, so it didn't matter.  But there was something very sweet when we left the Shedd on our way to lunch about Quinn linking his arm in mine and saying, "Now I'm just nine again."  Which is good, because I'm not ready for him to actually be ten yet.)

After the Shedd we were hoping to collect a new Mold-A-Rama from a Harry Caray sports restaurant that we know has a machine, but we didn't realize there was more than one such restaurant and we ended up at the wrong location on Navy Pier.  So we grabbed a little lunch and enjoyed a pleasant walk on an unseasonably warm day which worked out fine.

Then we made a stop at Ikea because the only present Mona had requested was a replacement leaf-canopy thing for her bed because the old one she had was all worn out.  We picked out a new couch for the family room that one day we hope to go back and buy, had a nice dinner, then headed home.  We always have fun at Ikea.  (Except that one time when we lost the girls in there when they were little, but the memory of that doesn't make my heart race the way it used to, mostly because I know it all came out okay.) 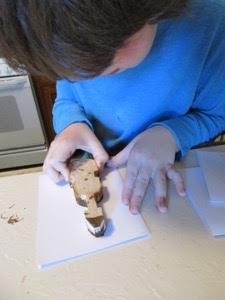 Between that birthday weekend and the following birthday weekend, Quinn helped me make this year's holiday cards.  We decided on gingerbread violins, so we mixed up some paint (we had everything but brown, but luckily you mix enough stuff together you get brown whether you want it or not), and Quinn used a wood block to make the prints. 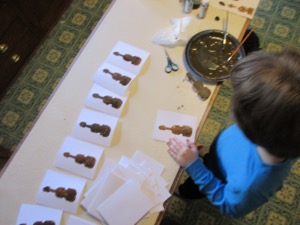 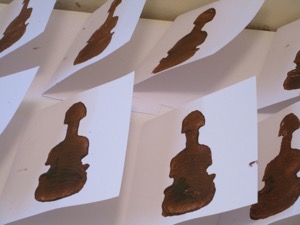 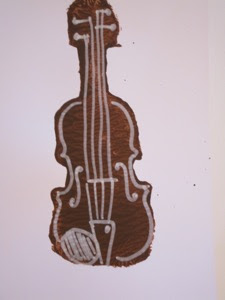 Once they were dry we went around with a white paint pen on them like frosting.  Quinn did such a great job!  I'd be much further behind on Christmas stuff without his help this year.


Next, Aden successfully turned 14.  I know each year I'm just as struck as by the last that she's getting so grown up, but this time it's more than that.  14 is an age that for many is part of their adult narrative when they tell their own stories.  A lot of where I am now I can trace back to events when I was that age, and those memories are solid in a way that most early childhood memories really aren't.  Aden's still a kid, but with a foot squarely testing ground in the adult world more and more often.  I look at this beautiful, capable young woman and every once in a while it just takes my breath away.  How did I help make a lovely grown person like that?  How can I have watched her at every step from when she was a baby to now and still be surprised at where we are?  It's too amazing. 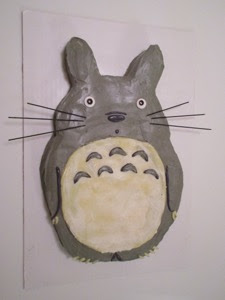 Aden wanted a party at Incrediroll with several friends (the staff is starting to recognize us over there), followed by a sleepover with a few girls.

She also wanted her cake to look like Totoro, and it needed to be vegan.  The cake ended up a little frosting heavy because I wound up changing plans part way through when the fondant I made got too dark in color and I ended up putting grey frosting over white frosting, but it all worked out.  The cake was tasty and everyone who knew what Totoro looked like knew what it was, so that's a cake win. 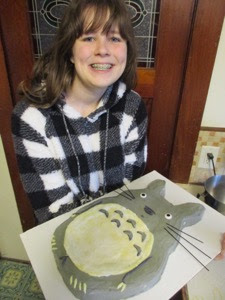 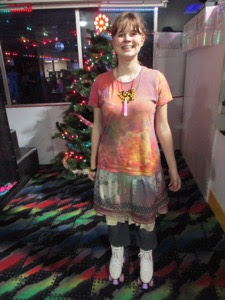 The weirdest thing about Aden's party was how easily it could have been my 14th birthday party.  She and her friends did roller skating at a rink, played records from the 80s (I could not believe they were listening to my A-ha album), and they played Atari late into the night.  (By the time I went to bed they were debating whether to switch from Maze Craze to Frogger.)  They also played on the pachinko machine and did origami, and came up with some kind of game that took over the downstairs that involved a lot of fake sword play that I decided I probably didn't want to watch.  For all the talk of high-tech kids these days, it was a pretty retro event. 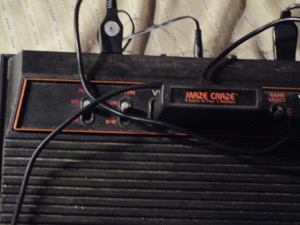 The best thing about Aden's party was seeing in person how nice all her friends are, and watching how well both she and they included Quinn in all the activities.  Mona retreated to her own space for much of the weekend, but Quinn wanted in on everything and was made to feel completely welcome.  He gushed on and on to me the next day (when we were out running errands just the two of us) about how much fun Aden's party was, and playing pictionary, and dancing under the mirror ball, and playing Atari....  How nice is that?  I suspect the average 14-year-old girl might not want to have her 9-year-old brother hanging around while she has her friends over, but she was genuinely happy to include him, and her friends were, too.  As the mom it made my weekend. 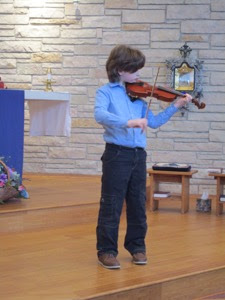 The same morning as the party, Quinn had his first violin recital.  He played Lightly Row from memory, and although he told me later he was shaking the entire time he played very well.  I was really proud of him.  (And also of how much work he put into the cream puffs he helped make for the reception afterward.) 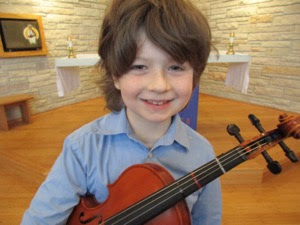 Mixed into this whole time period was another concert, some messy medical stuff, a ton of work, the start of volleyball (that's its own post), and the creation of my "Box of Violin Making" (which is also it's own post and one I can't wait to show you!).

There's still a piano recital coming up, a gig, a day trip, and Christmas, but at this point I'm feeling like we are over the hump.  We should reach the new year without collapsing first.  (But all that relatively blank space on the calendar in January is looking more and more like the magical land of naps.)
Posted by Korinthia at 7:56 AM