I have a lot of broken things at the violin store that I save for projects.  I've made a bow-quet, a cello lamp, a crayon box, a toy box, various sparkle instruments, ....  I have lots of other ideas that will be fun and interesting if I ever find the time to tackle them, but ever since I opened my store I have wanted to make a display inside a cello about how violins are made.

I do talks for school groups--often where I have to take my props on the road--and it's cumbersome.  Transporting examples in miniature seemed like a lot less hassle.  Plus the cute factor doesn't hurt.  But it's a labor intensive project and there were many elements to puzzle out, so I've just never made the time until recently. 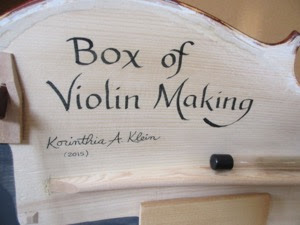 The truth is, there will never be enough time for any of the things I want to do ever.  I came to that realization after I had Aden, and kept waiting for some magical stage where I wasn't completely swamped in order to get back into violin making.  Then I started to notice that each new stage was just as busy as the last and if I waited for time to materialize I would never build violins again.  Having kids fills any vacuum and all your time is simply gone.  I had to force the issue.  I did that with writing (and need to make myself do that again) and I do it in waves with instrument making.  It's worth sacrificing sleep or a clean house to actually accomplish something that interests me now and then.  And since we are considering being a part of Doors Open Milwaukee next year, having a display would be useful for that, so I decided now was finally the time for my box. 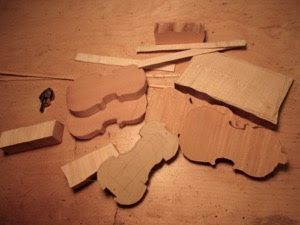 I started out by taking the top off a broken rental cello and painting the bottom of the inside to see how it looked.  I began collecting bits and pieces to carve and display.  I wanted a box that answered some basic questions for me, so that I could answer more interesting questions instead, and to be able to use the cello box itself to explain things as well.  I figured out the scale I wanted that would fit all the bits in the box and started carving little things. 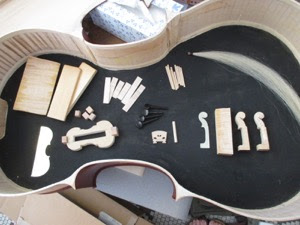 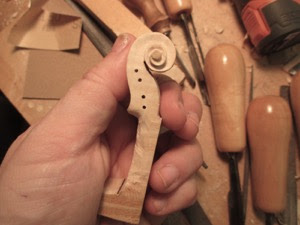 I decided to put text on the lid of the box to answer the questions I get most often, which are:  "What kind of wood do you use?" and "How long does it take to make a violin?" 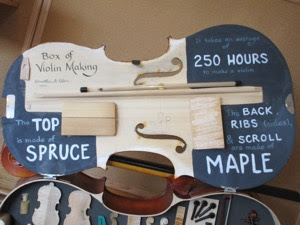 The first question is easy.  Boring to answer over and over, but easy.  Generally the top is made of spruce, and the back, ribs (sides), and scroll are made of maple.  There are other woods involved, such as ebony for the fingerboard or willow for the blocks, etc.  But for the most part the answer is "spruce and maple."  And on the box lid are pieces of wood attached with magnets--a two piece sample of quarter-sawn spruce, and a one piece bit of maple--that I can take off and pass around.

The second question is not easy, but a natural one to ask.  After surveying other violin makers to see what they say, the safest answer to give people seems to be "About 250 hours."  I don't know what this answer actually means, though.  Is that timing all the work from start to finish?  Is it actual working time, and if so does that include waiting for glue to dry?  As part of my graduation from violin making school I had to build a violin in the white and play on it, so I know I can build an entire instrument without varnish in 21 days if I have to, but it's not fun.  Varnishing often takes me longer than building but most of that is drying time.  How do you clock that?

I do not get to build full time, so I have to start and stop, and I have no idea how long the entire process really takes me at this point.  Even timing elements within that process is confusing.  For instance, about a month ago I got my bass bar prepped and rough fitted.  To finish fitting it I need an uninterrupted stretch of time of several hours because once I get it the way I want it I need to glue it immediately.  But I work at home and have three kids, so finding that block of time is hard.  I plan to get to it this week.  So, when I finish the bass bar, should I say it took me eight hours or a month?  I don't know.

Anyway, back to my box! 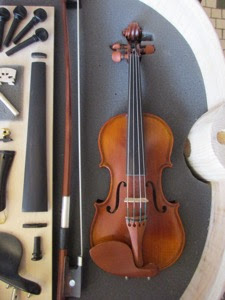 After I'd already made most of my little pieces, it occurred to me that the 1/64 size violin I have in the store would fit inside the cello box.  It would be too adorable (and frankly, too useful as a prop) to not include in the display.  (Even though now the number one question I will be asked is if I made that tiny violin, and I did not, so that there's that to look forward to.)  Adding the 1/64 violin and the bow displaced the basic pieces of spruce and maple I was planning to use, and that's how they ended up on the lid.  (My original concept for the the lid was to have far more building information on there, but I think keeping it simple works out better.)

Trying to figure out how to mount the violin in the box securely and still make it easy to remove took me a while.  I also wanted the box to be able to be held open two ways--while lying on a table with the lid propped open, or standing on its side with the lid all the way up--so however the pieces were held in there needed to stay in place both flat and upright.

I finally decided a carved piece of foam would work.  I ordered a couple of really thick, dark grey pieces of foam from a local business and then experimented with cutting them on my band saw.  I found for my little scroll samples it worked well to cut shapes out for them to fit into using an x-acto knife, and then sawing in from the side with my Japanese saw (which has a narrow kerf) to remove the cutout and achieve the depth I wanted. 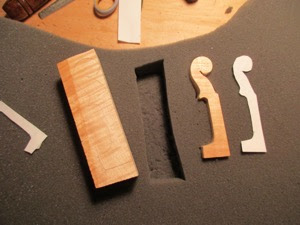 It took a little practice to be able to do the cutout for the violin, but it worked!  It's snug and stays in place during travel and while displayed upright.  The bow is held onto the foam with Velcro, as is the board of fittings.  Everything in the box is designed to be removed and passed around. 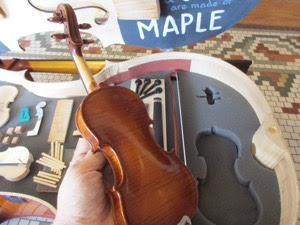 Most of the instrument pieces are held in place with magnets. 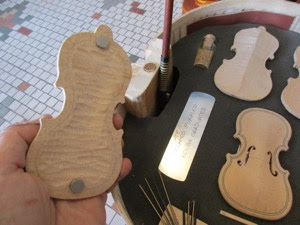 The lid also closes with magnets, and the front latch is made with two kinds of thumb grip material. 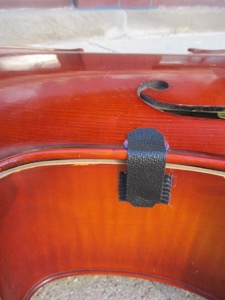 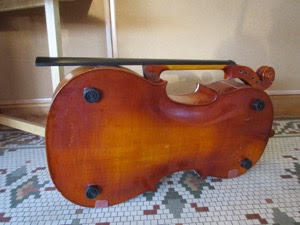 I wanted to use as many things that were actually related to violin making as possible, so the rubber feet on the back are bass endpin stoppers.  I used cello endpin stoppers (which are much smaller) on the side and another one of those on the scroll to brace the lid when it's fully open.

When the box is on its back the lid is propped open with a small bow (that I can also disassemble and use for explaining how bows work as well).  The spot where the tip of the bow fits to the lid is a piece of spread wedge stock.  (That doesn't mean much to most people reading this, but now I'll have something to teach you when you come see the box for real someday!) 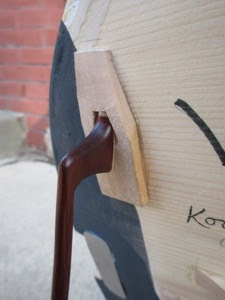 Normally when I do demos I'm a little at the mercy of whatever stage I'm on with the violin I'm currently building.  With my mini pieces I'm able to show different parts of the whole process at once.  I have a little back plate that is half rough-gouged, and half finger planed.  I have a top plate that is half finger planed, half scraped.  I can show people now how the process of installing purfling works. 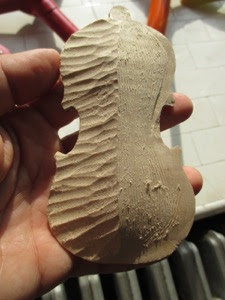 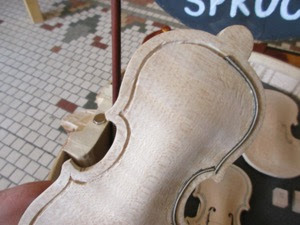 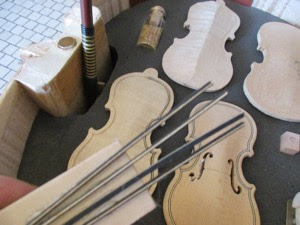 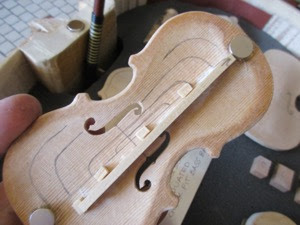 I have a little bottle of hide glue in my box. 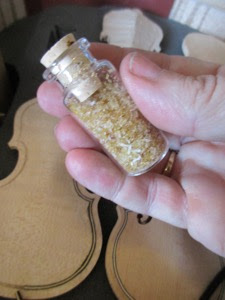 The main thing I learned from my kids while doing this project is all they really need for a gift this holiday is a small hank of horsehair.  You're not supposed to ever touch the horsehair on your bow, because it's coated with rosin which is sticky.  The sample hank in my box is knotted at one end the way I would do for a rehair, but the hair is loose at the other end and un-rosined.  Kids in the store are thrilled to have a chance to actually touch the horsehair, and my own kids can't stop playing with that hank when they stop in after school.  It took me a while to figure out how to store it in the box, but then it occurred to me to use a string tube.  I transferred one out of an old case, cut it down to better length, and mounted it on the bass bar in the cello lid.  I'm really proud of that solution. 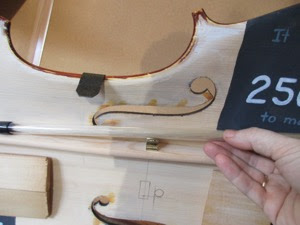 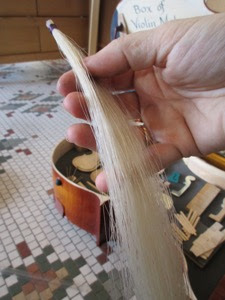 I made a little varnish stick to show the general progression from ground to polishing. 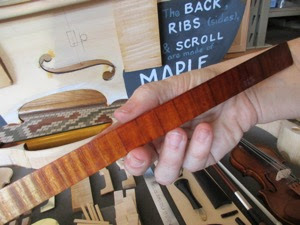 The cello box itself is a useful prop.  It's a perfect way for showing a finished rib assembly, the finished shapes of the the blocks, and where the linings are installed.  I also drew on the inside of the top a diagram of the soundpost placement in the spot where it actually goes, so that will help me explain that to people better. 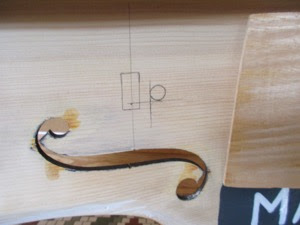 To pack everything up safely I made a thick blanket out of fleece (with canvas inside), and added a piece of one of our cleaning cloths to the front of it.  There are also a couple of loops to store the lid-prop-bow.  (I may still add some fasteners to hold the blanket in place when the box is closed and upright, but so far it doesn't seem to need them.) So that's my box!  I've been referring to it as my "Box of Minis" to the kids as I've been poking away at it, but now I just kind of think of it as my "Demo Box."  I'm pleased with how it came out and glad to see it finally happen after so many years of just thinking about it.  (Now maybe I should buckle down on some real violins?  Definitely yes.  January is building month.  The house will be a mess and I will be sleepy, but violins will happen.) 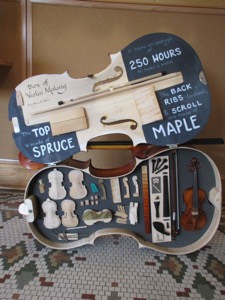