I only really had one evening to plan and create Mona's surprise cake, so I settled on a turtle because turtles are cute, Mona loves them, and turtles are sort of flat and round like a cake already anyway.  Turtle cake! 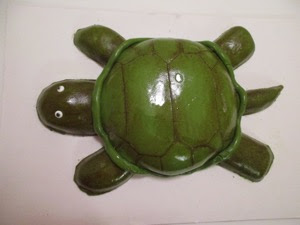 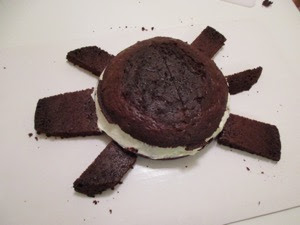 Mona's only request was that it be chocolate.  Easy enough.  Ian was kind enough to bake me a couple of round chocolate layers while I was at work so they'd be cool enough to assemble when I got home.  I built myself a turtle shape, put on a crumb coat, and let it all sit in the freezer while I mixed up a batch of fondant. 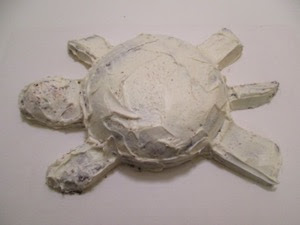 Fondant is weird stuff.  The recipe we use for it tastes pretty good, and in some ways it's easy to work with, but you either get it right or you don't.  There's no fixing it or fussing with it later.  You either rolled it out well or you didn't, and you get one shot at getting it on the cake.  For the most part it worked this time.  I got it a nice turtle color, rolled it flat, and draped it onto the clean coat of frosting.  (It really helps to get that crumb coat on and chilled when the cake has been cut up first and is extra crumbly.  And then I use a knife dipped in water for the smooth coat on top of that.) 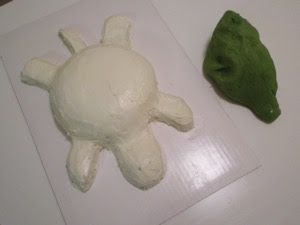 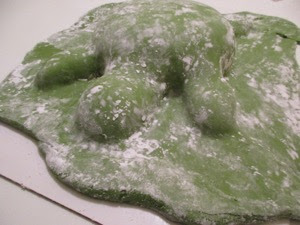 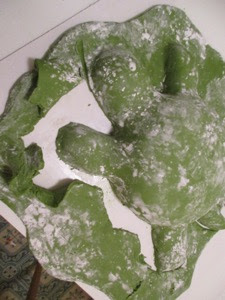 Once I trimmed off the excess fondant I wetted it all to smooth it out and dissolve the excess powdered sugar from the rolling pin. 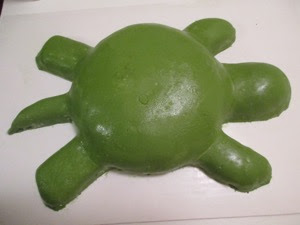 The rest was just a matter of etching in some lines on the shell and applying a bit of brown food coloring with a paintbrush.  We had some candy eyes leftover from Aden's "Cupcake War" party a few years ago that we stuck on, but they make the turtle look a tad confused.  Aden and I were laughing that the cake looks a little like we dropped it and now the turtle is lying there thinking "What?!" 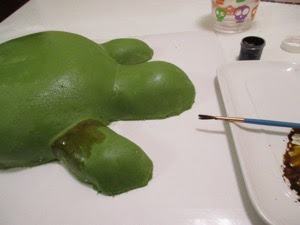 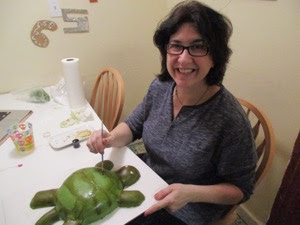 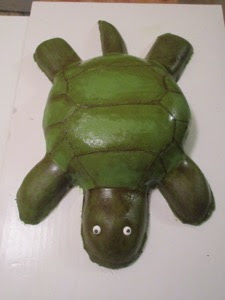 Anyway, it came out pretty cute, but at 5:30 in the morning I woke up thinking it really needed a rim around the shell, and I still had extra fondant, so I got up and rolled it out and added it on, and then it looked done. 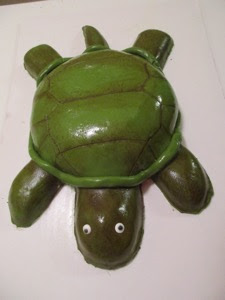 The fondant got  shiny in the freezer, which added to the look of the turtle when I brought it out tonight.  Mona looked so pleased!  She's such a sweet girl.  I can't believe she's 12.  I am such a lucky mom. 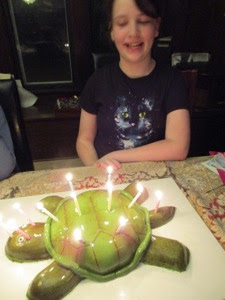