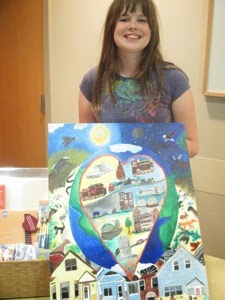 Aden was recently asked by her art teacher to represent the elementary students at her school in a local art competition.  The neighborhood association wanted to sponsor the first annual art show for kids as part of the Bay View Art Walk.  The Art Walk is a big evening event in June where artists display their work all over town, and the kids' work was shown in the library.

I'm so proud of her.  This was her first time using acrylics on canvas, and she worked on it for weeks.  She planned out her painting in different sketches beforehand, and at first only did actual painting in the evenings when she was feeling inspired.  As the deadline drew nearer, Aden discovered the truth about working in a creative field.  Artists of all kinds, when they are accountable to someone else, don't have the luxury of waiting for the perfect moment to create.  At some point you simply have to buckle down and do the work. 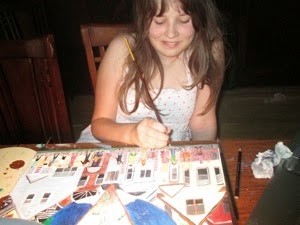 So Aden painted late into each night, and when I could I'd read to her to keep her entertained.  (We've been reading Harry Potter, and while she painted we got through all of book three and most of book four.)


I'm impressed with how thoughtful and detailed her work is.  The theme for the competition was "Neighborhood." 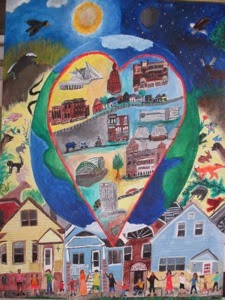 Here is her artist's statement about her piece:

I wanted to not just make it about how our neighborhood works, but anybody's neighborhood.  The world is everybody's neighborhood, and the world itself is part of its own neighborhood (the solar system).  The animals and plants in the picture could have come from almost anywhere else in the world, and yet we can find them all right here.  It's their neighborhood too.  When we think about our neighborhood we think about ourselves there, but when we look around we find we share our neighborhood with everything around us.  Inside the heart shows what, out of the entire world, is what I would call my neighborhood.  The people at the bottom show the diversity of who could live anywhere, while still being focused on who could live here.  Some of the houses people might recognize if they look closely.  The animals show what else lives here, including the Bay View fox, the eagle that's been variously spotted, my dog (Chipper the black mutt), my friends' dogs, our only native hummingbird, and the frog and the fish show the relationship we share with the lake. The sun and the moon aren't included just to be pretty, they show that other people and animals could like their neighborhood in either the night or the day.  And I added a badger because we are in Wisconsin.

Isn't that lovely?  Not that I'm biased or anything.  For those of you who don't know Milwaukee, the things inside the heart are places like the art museum, the gas building, her school, the domes....  In the very center is the violin store. 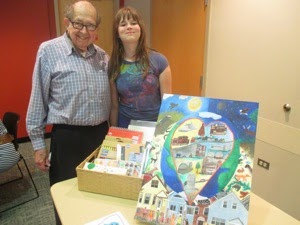 My dad happens to be visiting right now, so he was able to come with us to see Aden's painting at the library during the Art Walk and partake in some cookies and juice.  He declared in his capacity as an art dealer, not just a grandpa, that her work was very good.  Here's Aden with her grandpa, her painting, and her basket of prizes (which was an assortment of nice art supplies and a couple of T-shirts).

Her work will be on display in the park pavilion through the summer, and then I told her we might take it up to the cottage in Michigan, so that way we can have a little piece of our neighborhood with us when we are there.  (Mona is already hoping to be selected to compete next year!)