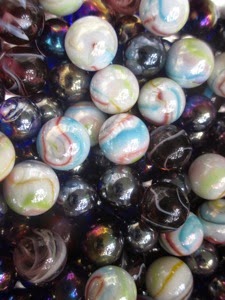 I read this post recently about using marbles to help kids manage screen time over the summer, and my first thought was that it was pretty much just another reward system like a sticker chart (which has never ever ever worked for us never ever).  But seeing as our summer was off to a rocky start in terms of too much Minecraft and TV and not enough doing basic chores without nagging, I figured it couldn't hurt to try.

Holy moly is the marble thing a good system.

Basically the way it works is one marble is worth 15 minutes of screen time.  When the kids do the chores they are supposed to be doing anyway, they earn marbles to put in their jars.  When they are ready to use screens they set a timer and "pay" for it by taking marbles out of their jars.  It's not so much a reward system, but a way of helping them balance out their time better between what they should be doing and stuff they know they need to monitor better.

I talked to them about it first to see if they were interested.  Quinn (who likes collecting things) and Mona (who already does her chores without being reminded) were excited about the idea.  Aden was wary, but agreed to give it a go.

We went to American Science & Surplus where they have a good marble selection (as well as jars) and each kid picked out a specific color of marble for his or her own.  (Quinn chose Nebulas, Mona the Octopus and Velociraptors, and Aden picked out Unicorns.)  I figured the worst case scenario was we would end up with a lot of pretty marbles.

Then we went home and made up a list of things that could earn them marbles.  (Aden wanted to know if she could earn marbles for things like reading or playing games outside, and I told her no, that was just enjoying life.)  We started with really basic things for one marble they should be doing without reminders:  Emptying or loading the dishwasher, walking the dog (minimum once around the block), practicing (for at least ten minutes).  We came up with things specific to particular kids (Aden can earn a marble for brushing her hair thoroughly).  Then I started looking around at stuff that would be nice to have help with that nobody ever thinks to do but me, like straighten up the shoes and instruments in the music room.  That's a marble.  Clearing a cluttered surface is two marbles.

And then I decided that writing and mailing a letter to someone was three marbles.

Well.  We may single-handedly save the US Postal Service.  Quinn alone has mailed out nine letters this week.  Every time Aden's marble jar runs low she finds the address book and some paper.  Her floor is still a mess, but if she's writing to her grandma?  I'll take it.

The shoe and instrument area is now always neat.  The DVDs are put away and organized.  I have not had to remind anyone to practice in days.  Nobody complains about walking the dog.  Mona even cleaned her brother's floor yesterday.  I don't know if they will keep this up, but even if it's just for this week it's been a good week.

Now, my kids are on the honor system with this, because they are a trustworthy bunch.  There is a bowl with all their marbles in it on the dining room table which is where they use the computer.  They add or subtract marbles from their jars on their own.  From elsewhere in the house I can hear the timer go off next to Aden as she plays Minecraft, then the "clink clink" of marbles being put back in the bowl.  Every once in a while the timer goes off and then I hear violin practicing and then a "clink" as a marble goes back in the jar.  So it's working.

The really funny part is that Quinn uses almost no screen time.  He's just in it for the marbles.  But he asked if he could trade in marbles for something else, and when I asked him what, he said, "Soda."  We almost never buy pop, and we happened to have a whole case of root beer in the pantry for when my dad was visiting, and Quinn wanted some.  I told him it would cost four marbles for a can.  I also decided the kids could trade four marbles for money for the ice cream truck when it comes by, but Mona's already asked if she can spend her own real money instead, rather than relinquish any of her marbles.

The kids have done an amazing job filling their jars but they are miserly with those marbles, even though they can earn them back easily.  I was shocked to find that they didn't watch Saturday morning cartoons this weekend because nobody wanted to spend their marbles on them.  People often talk of Saturday morning cartoons as something from the past, but we don't have cable and the commercial networks still have a special Saturday morning lineup, so my kids have always curled up together to enjoy that weekend ritual.  I've always found it kind of sweet, but if the marbles make them rethink how much they value TV, then that's good.  Nobody's telling them they can't watch TV, but they don't do it mindlessly anymore.  It has to be an active choice, and currently the are choosing not to pay a price for it.

The nice thing about this system is it has removed verbal negotiation from our time management.  If Aden is on the computer I don't have to wonder if she is doing it instead of practicing or doing something more productive because she's already earned it by doing those things.  Not having to nag the kids about basic chores makes for much less annoyance in the air.  Normally when I come home from work and ask if anyone has remembered to practice nobody has and then I spend the next hour supervising all of that.  Now it's all done before I get home.  Last night after work we got to play a new board game instead.  There was time to goof around together and read.  It was great.

So will it last?  I have no clue.  But I like not having to nag, and I like that the kids are looking at their environment differently.  They actually look for things that need to be done rather that seeing past chores that didn't used to concern them.

Who knew there could be such power in marbles?
Posted by Korinthia at 1:13 PM