We struggled for a while with Ian and Quinn connecting after the deployments.  Ian was gone for the first eight months of Quinn's life, and it was hard convincing a baby who was used to having me all the time that this man he didn't know was an acceptable substitute.  Then just as Quinn was getting used to his dad, Ian was deployed again.  The adjustment to having Ian home the second time was much harder.  Quinn was cold to his dad, and you can't force love.  Ian was incredibly kind and patient with his son.  It broke my heart to watch Ian being rejected time and time again by this little person he loved so dearly.

Over time memories of the deployments have faded.  Aden still remembers them, but Mona only vaguely, and Quinn not at all.  For a long time Quinn's resentment of his father's reintegrated presence seemed formed purely out of habit.  As Ian's consistent patience and love became a stable factor in our home I think it became harder and harder for Quinn to justify his emotional distance.  It was out of step with his sisters and not logical.  (And Quinn is nothing if not logical.)  It took longer than I would have liked for him to start uttering the phrase, "I love you, dad" but it did happen.  And now it's assumed.

In New York over Spring Break we visited a hands-on art space for kids and Quinn made me this: 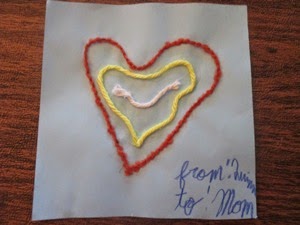 Quinn makes me hearts and offers me hugs and love all the time.  It's an element of my life I can almost take for granted.

But then Quinn also made this: 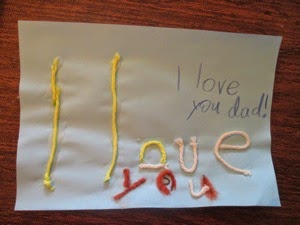 This simple creation of yarn and glue made me so happy I can't even express it properly.  This wasn't some school assignment, or something suggested by anyone around him.  It was his own idea, and it captures the welcome shift that we've observed over the past couple of years.  Quinn loves his dad and can say it now.  That's a big deal.  I think between his not having any recollection as to why he wouldn't love his dad, and being faced every day with reasons why he should, he finally let go of his old ways and left himself open for something better.

And love is definitely something better.