The costumes are done!

Which is good, because tonight my kids wore them to the annual Halloween Pajama Jamboree concert.  Then they have the Halloween dance at school on Friday, Trick-or-Treat in our neighborhood is on Saturday night, and city-wide Trick-or-Treat in Milwaukee is on Sunday afternoon.  By Halloween proper the excitement is long over, but my kids will probably still be in their costumes.  Wearing costumes in our house is only limited to days ending in Y apparently, so we will be looking at these outfits for some time to come which at least makes them worth the effort.  (I've had long days at work followed by rehearsals and concerts most nights so I've been up past midnight sewing.  But for 2013 it's done I tell you!) 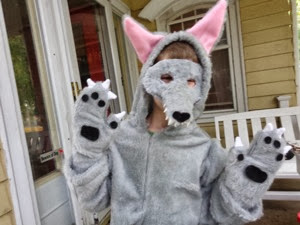 I know I already posted pictures of Quinn as a wolf, but he's so cuddly and soft.  We all just keep hugging him.


The next costume I worked on was Mona's.  She wanted to be a bat, but in her mind the only way to be a bat was to be like Aden was when she was a bat.


But Aden was a bat back in 2006 when Ian was deployed in Iraq the first time.  I was very pregnant and on my own and not really in a position to do a lot of sewing.  We bought bat wings that I modified to fit her four-year-old self.  She wore black clothes and I made her a little hood with tiny ears.  Thankfully, that year Mona had zero interest in wearing a costume of any kind on Halloween, so easy bat costume was all I had to do.
Aden was a bat again in 2007 after Ian was home, and I made her a new hood, and Mona was a giraffe.  Mona remained a giraffe until that costume was in complete tatters.  It's the only handmade costume I finally had to throw away.  But can you see the sister worship? 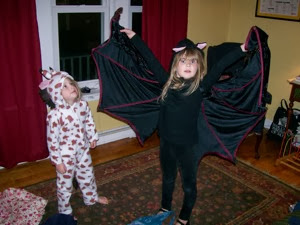 Mona still looks at Aden this way.  So if she was going to be a bat we were going to have to find those same wings or it wasn't going to be right, even though I knew I could make better ones myself.  (The original wings?  The only other costume we ever threw away because they were so cheap and flimsy that the wires poked through more often than I could stand to repair.)

The only bat wings we could find locally were sexy, sexy wings, so we had to go online where we did find the same, flimsy wings we'd gotten years ago.  Mona was thrilled.  I've already had to repair them twice so they may not last long, but in the meantime that girl is a happy bat. 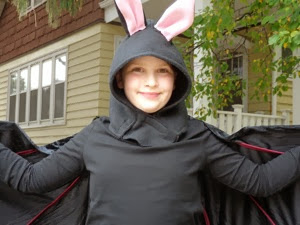 Aden took a long time to decide what to be.  There was talk of an owl, a fox, an eagle, a falcon.... But this past weekend we visited both the Detroit Zoo and the Lincoln Park Zoo and in each we admired the zebras.  By the time we got home to Milwaukee the zebra idea was looking more appealing, and when I told her we had to buy fabric on Sunday because it was the only full day I was going to have to make her something before Trick-or-Treat, she made up her mind.  The mane was tricky, but I'm sure I came up with the hardest possible way to do it.  (Because when one sews late at night one does not come up with reasonable solutions most of the time.) 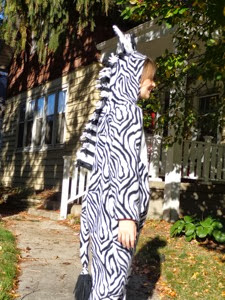 I had time last night after rehearsal (and there were still more episodes of Malcolm in the Middle to watch on Netflix) so I stayed up late again and made Aden a mask to go with her outfit. 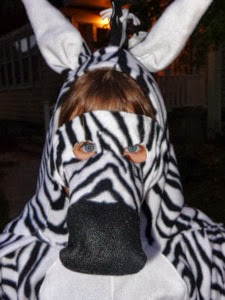 So there they are!  My wolf, bat, and zebra.  (Ah, and just last year they were my skunk, raccoon, and kangaroo.  My how they grow and change.) 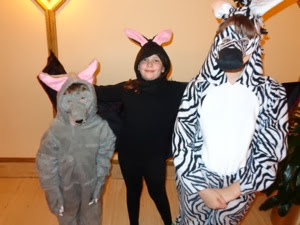 The dog we plan to just stick in his travel cage and cover it with caution tape so when he barks at Trick-or-Treaters it just adds to the effect.