Who's afraid of the big, bad Quinn?

Halloween costumes!  One down!  October has a lot going on for us, so I asked the kids to figure out what they wanted to be for Halloween early.  Quinn wanted to be a wolf. 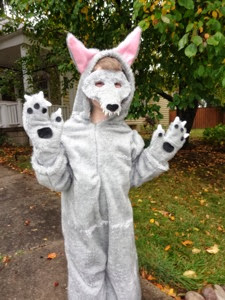 He seems happy with it, although he says he'd like the nose area on the mask to be more comfortable.  Originally I just made a little snout with elastic to wrap behind his head, but the angle with his head shape was all wrong and it just wouldn't stay. 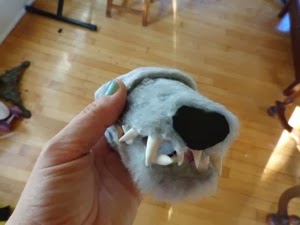 So I had to switch to a mask over the eyes and add to that instead.  I cut the snout out of foam and just glued fabric around it.  The teeth are made of model magic clay because we happened to have a bunch of that lying around. Mona is going to be a bat.  But her idea of a bat is based on how Aden was once a bat, and when Aden was a bat Ian was deployed and I was hugely pregnant and didn't feel up to a lot of sewing so we just bought wings and she wore black clothes and all I had to make was the hood with ears.  So even though I offered to make Mona wings, she wanted the same kind of wings her sister had, and the only place we could find them was online and we are still waiting for those to arrive.  The head part is done, though, so technically I guess I'm finished with Mona's costume, too.

Aden has yet to decide.  She says she's just not inspired, so she may end up in her kangaroo costume from last year.  At first she thought she should be an owl, then she considered being a fox, and the latest idea is a harpy eagle.  I told her all of those sound fine, but she needs to give me a day or two to make whatever it is so deciding soon would be appreciated, please.  We'll see.

A quick note about the depressing number of "sexy" costumes.  It's a topic that's been discussed to death everywhere, so there's not much for me to add I suppose, but it was deeply depressing to go into Halloween Express with the kids trying to find bat wings for Mona.  There were hundreds and hundreds of costumes for women that were all short skirts and skimpy things that looked about the same and it was awful.  No variety, no other options.  Pretty much the message is that if you are a woman you are supposed to be a sex object for Halloween or you are on your own.

The girl costumes at Target weren't really any better.  They were all sparkly and/or pink.  They have Dorothy from the Wizard of Oz, but it's sparkly.  They have Spider and Super Girl costumes, but they are pink (and come with press-on pink nails).  The worst?  Was Merida's bow and arrow from Brave were covered in glitter.  My kids were appalled.  They kept saying, "But she didn't want to be a sparkly princess!"  How come my six-year-old understands that, but the makers of the Brave merchandise don't?

I don't have a problem with sexy costumes being available, or sparkly pink things.  But why take the few things that aren't that way and smush them into that same mold?  There are plenty of sparkly princesses to choose from without adding Merida to the mix.  Why do they all have to be the same?  Doesn't it make sense from a marketing standpoint to maybe appeal to other kids too, thereby selling to yet more kids?  And what if you're a woman who doesn't want to wear a miniskirt for Halloween?  Why is that inconceivable?  (Especially in Wisconsin in October?  Come on.)

Ugh.  Anyway, as long as I can fake my way around a sewing machine we don't really have to worry about what's out there.  Except for Mona's bat wings which better arrive soon.

Doesn't Quinn make a cute wolf?  He insists he isn't big or bad, though.  He's a nice wolf.  And he likes being furry and having a tail.  (I just like him happy.) 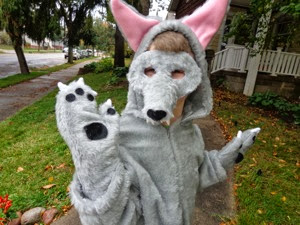 Looking forward to Halloween!
Posted by Korinthia at 10:35 PM