At the cottage I finally finished When We Were Orphans by Kazuo Ishiguro.  My grandmother, who was a terrific reader, told me years ago after reading his work for the first time that she planned to read every novel the man wrote.  I don't know if she actually did, but it's likely.  When We Were Orphans took me a long time to get into, but it was worth reading and I'm glad I finally got through it.  I also read The Dog Stars by Peter Heller and enjoyed it, and I started Infinite Jest by David Foster Wallace, but that will just have to be some long term background project because yikes.  I'm halfway through Life After Life by Kate Atkinson and it's amazing.  I am desperately trying to find time to read now that I'm back home because I am dying to know what happens next but it's not easy.  A few pages here and a few pages there is just not the same as curling up with a book up north and diving in for hours.  I've been swamped at work (even going in on 4th of July to try to catch up) and using my little bit of writing time to read (which means I feel behind here on my blog, too).  If I could just find a few extra hours somewhere.  (Do we really need sleep?) 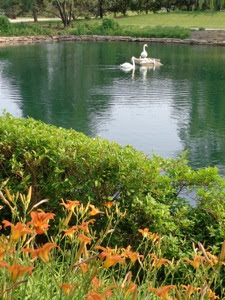 Anyway.  Great trip, and we were making good time on the drive home on Monday when one of the wheels on our car started making frightening noises and we had to pull over.  Ian was driving and managed to get us off the freeway and into a business park north of Chicago.

It's interesting to me how much of life is context and attitude.  We were not stuck in traffic or anyplace grim.  The tiny park had an island with a little bridge, trees, flowers, and much to the children's delight a pair of swans with six cygnets (that my kids liked to call "swanlings").  It was pleasant and charming, the weather was perfect.  We had to wait there for two hours for a tow truck.

Now, if we'd gone specifically to this park to be at the park, two hours would have seemed not long at all.  In fact, we were all surprised when we realized it had been two hours total because it felt much shorter.  But because the plan had been to be home by then, it took effort to stave off the negativity surrounding the whole situation.  The kids were hungry (we were literally five minutes from stopping for food when we had to pull over) so that put them on edge, but for the most part, every time they expressed worry over the wait I'd say, "But how cute are those tiny swans?  Did you see the fish?  We have a whole tiny island to ourselves!" and they would brighten and begin running around again.  No, it's not fun to have the car break down, but if it's going to happen this was a lovely way to do it.

We ended up having Ian take the dog with him to the service station when the tow truck arrived, and I walked the kids to a fancy hotel at the other end of the business park.  We ordered a nice dinner and called my daughter's friend's parents to see if they could drive down and come get her.  They ended up giving a ride to everyone they could fit.

Mona and I stayed behind at the hotel until Ian could drive back down in our other car.  We split a dessert and watched TV while snuggling on a couch.  We had the world's nicest waitress.  She was impressed at how good all the kids were during dinner, and Mona is so sweet about everything that when we returned to the restaurant and told her we'd be there for a few hours she was very kind.  She even offered to let Mona use her phone to play games during the wait if she wanted.  (Mona thanked her but said she would be uncomfortable borrowing someone's phone.)  We watched some obstacle course show where we were impressed by how strong people were.  At some point when Mona dozed a little under a blanket I got to read.  Eventually Ian found us, we stopped by the other car to grab our things out of it, and headed home.  It was well after midnight before I crawled into bed.

But was it a bad nine hours just because it wasn't the way we'd planned to use them?  Not really.  It's unfortunate to have to pay to replace the wheel bearing on the car, but we weren't hurt.  I liked our time in the park.  I liked our nice dinner with my kids and Aden's sweet friend.  I liked that Mona volunteered to stay with me in the hotel all those extra hours just because she loves me and didn't want me to be alone.  I like that I have a husband I can count on to help figure out all the logistics of an unexpected situation with me.  I am thankful that our circumstances are such that none of it was a crisis.  I could be annoyed with the trip home and call much of it a hassle, but assessing all the good in there, that seems willfully ungrateful for the life I have.

Sometimes the long way home is what you make it.
Posted by Korinthia at 10:14 AM