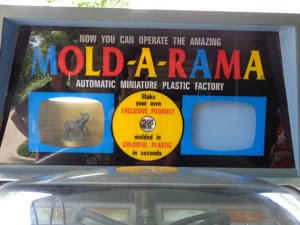 
I've never bothered getting them before because spending money on yet one more thing while trying to get around the zoo with small children was not worth it, but I always wanted to.  So I had Quinn dump out my change jar this morning, sort out all the quarters and put them into a big bag, found all the Mold-A-Rama machines on the zoo map, and told the kids today was the day.  It made for a truly excellent time at the zoo.

We got our first zoo membership back when Aden was born, and since then we've usually stuck to what we think of as the "One Animal Rule."  Each child may pick one animal to see, we see those, and anything else we manage to see (based on how much more anyone else can handle on any given day) is a bonus.  That way we manage to keep the trips short and not get worn out.  That's the beauty of a membership, because otherwise you feel obligated to get your money's worth on a single trip and try to see it all and it gets exhausting.  I grew up six blocks from the Detroit Zoo, which (like the city itself) has a sprawling layout and used to take forever to get around.  The Milwaukee County Zoo is compact by comparison, and I thought I'd seen it all. 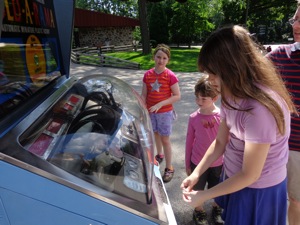 But charting a course around the zoo based on the locations of the Mold-A-Ramas sent us to areas we haven't been.  The first stop was near the Wolf Woods.  I honestly can't remember seeing a wolf at our zoo before.  The Mold-A-Rama figure there turned out to be my favorite: a mountain lion.  Aden loaded in the quarters, the mold pressed closed, the whole machine made impressive whirring and vibrating noises, and about 30 seconds later we had our toy. 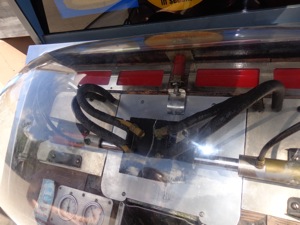 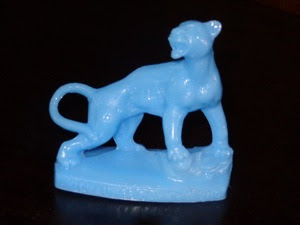 Then from there we headed toward the Australian exhibits.  I have no memory of ever being in the kangaroo house before.  My kids have always requested to see bats, giraffes, and frogs, all of which are on the other side of the park, so this may have been my first visit to that area of the zoo.  We molded a moose which had a defective nose, so Mona decided to keep that one to turn into a cyborg, and we made another one (with a better nose) for the family collection.  At the other end of the building was a Mold-A-Rama for a kangaroo, but it was all clogged with plastic kangaroo carnage and we decided against putting our money in it.

Next we made the polar bear, giraffe, elephant, lion, tiger, then walked the long way around past the elk and caribou to make the bat.  By then we were getting a little tired, so we skipped a visit to the tomato frog in the reptile house (a family favorite) and moved on to a building connected to macaque island.  This was another spot we were thwarted in our mission as the Mold-A-Rama for making a shark there seemed to not have any power.

Honestly, I am stunned that as many of these machines were running as there were.  Who maintains them?  Are they easy to fix?  Because they can't be easy to find parts for.  And the shark machine didn't look bad, just powerless at the moment.

Anyway, from the shark we didn't get, we moved on to the primate house and got a set of monkeys doing a "see no evil, hear no evil, speak no evil" pose, and lastly a gorilla with his arm held up as if it were waving. 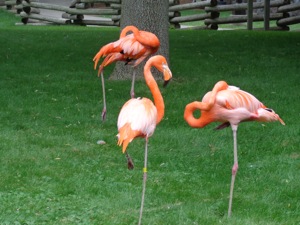 Then we agreed on a stop at the bird house to visit the crocodile birds.  Last week we were at the zoo because Quinn was invited to a birthday party there, and while he was getting a behind the scenes look at the sea lion exhibit with his friends, the rest of our family spent our time looking at birds.  We managed to snag some flamingo feathers from an outdoor habitat (and Mona taught me that the bend in their leg that looks like a knee going backwards?  That's really their ankle), and in the indoor display we discovered and fell in love with the adorable crocodile bird of Africa.  It looked to us like some kind of fancy tennis ball, and it kicks its little legs out sideways to dig shallow spaces in the sand.
Quinn didn't get a chance to see our new favorite bird last week, so we took him to look at the crocodile bird today.  He was delighted.

I have mixed feelings about zoos.  I keep thinking about the banner over the entrance to the Springfield Zoo on the Simpsons, which read: See Your Animal Friends In Prison.  The idea of animals in cages is sad.  There is no way around that.  The birds never really get to fly, the cheetah doesn't get to run, the elephants don't get to be part of a herd, the spaces for the primates are too tight....  I know all of that and I feel guilty looking at animals that are supposed to be wild being held for my entertainment.

And yet, I know there is conservation and research being done that zoos are involved in.  And Jack Hanna of the Columbus Zoo always described the animals there as being ambassadors to the wild.  That their job in the zoo was to make connections to people that in turn help their relatives out in the world.  I see that. 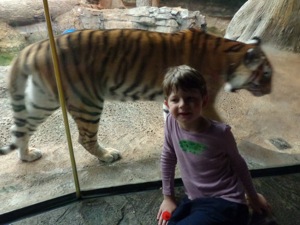 I see that when my kids spot something remarkable and develop an appreciation that wouldn't have happened in any other way.  We've seen a real tiger.  It means something, then, when we hear stories about tigers being endangered in their wild homes.  It's personal in a way that it might not be otherwise.

I think a lot about how with access to so much information through technology anymore it's hard to know sometimes what we've really experienced.  I feel like I've seen a panda.  They are so familiar to me through countless books and movies and television shows that I feel surely I've actually seen one.  But I haven't.  I would like to.  And that will likely only ever happen at the National Zoo.

I am so glad to have seen live jaguars in my lifetime.  I think they are one of the most breathtakingly beautiful creatures on the earth.  Pictures don't do them justice. 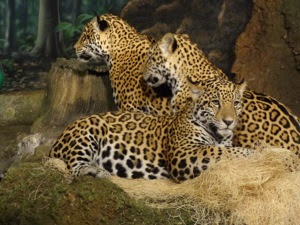 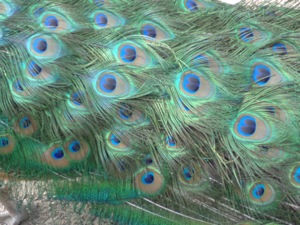 I'm glad to have seen real giraffes.  And elephants.  And that my kids have witnessed the preposterous beauty that is a peacock display.  We've seen polar bears and penguins and spider monkeys and (my personal favorite) an octopus.  I appreciate how terrifying it would be to run into a hyena that was not separated from me by a piece of glass.  I am grateful to have seen caribou and grizzlies at a distance in the wild, but also grateful to have seen them up close in the zoo.

So my feelings remain mixed.  I think as long as zoos are being responsible as possible for the animals in their care there is a role for them to play.  But maybe we are not meant to have the privilege of seeing kangaroos and lions and cobras with so little sacrifice to ourselves.  I don't know.  All I can say is we saw a wolf today.  And my kids hushed at the size of it, and the reality of it touched them in a way no book or movie ever could.

Almost as magnificent?  My new collection of Mold-A-Rama figurines on my mantel.  When we laid all the figures out before leaving the park we discovered while in my backpack one of the antlers had come off my purple moose, so I went back for another one.  While I was there getting my replacement I took a peek at the kangaroo Mold-A-Rama and discovered it had been fixed!  So I got that one, too, which means now we just need to go back for that shark before the summer is up and we'll have the full dozen. 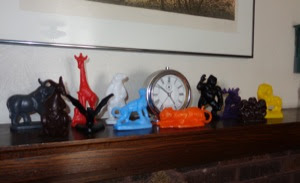 One summer goal (one shark short of) accomplished!  Time to start looking for some kites.
Posted by Korinthia at 10:51 PM