This weekend my violin store got to be a destination on a race! 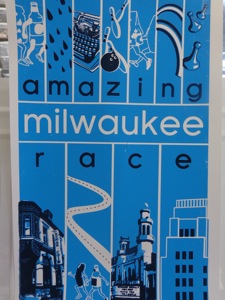 The Amazing Milwaukee Race is a local version of the The Amazing Race as seen on TV.  Pairs of people team up to run a course, stopping at checkpoints and solving puzzles or performing tasks to receive clues that get them to the next destination in the race.  I ran one a couple of years ago with my friend Linda (the name of our team was "Second Place" but we actually came in fifth), and last summer Ian and I did the version on bikes (we were "The Slow Spokes" and I'm impressed we finished at all).  This year I sacrificed getting to run the course in order to have Korinthian Violins be one of the secret locations.

Our stop was a "Roadblock" which means the team arrives and must choose one person to complete the task before they can receive their next clue. 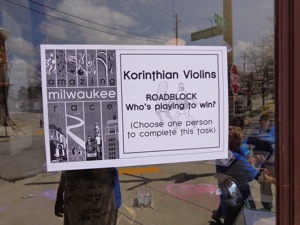 There were 77 teams, and the violin store task was to learn to play Mary Had a Little Lamb on the violin well enough that it was recognizable and then perform it while being video taped in front of the store.  I figured it would be fun because our store is pretty and in a location off the beaten path and a lot of people would be surprised to discover it there.  I also know there are a lot of people curious about holding a violin and trying to play it who have never found an excuse to do so.  As long as we kept it fun I thought we could be a memorable stop on the race.


It was hectic for a while there, but a good time.  The weather was perfect (every time I've run the race it's been raining and cold) which helped a great deal.  People lined up along the side of our building to wait for their turn to come in the studio and receive instruction on how to play.  Inside I had violins set up to go and music written on the board. 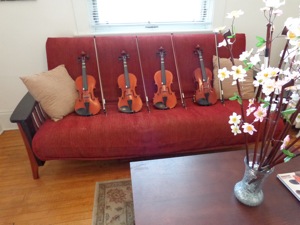 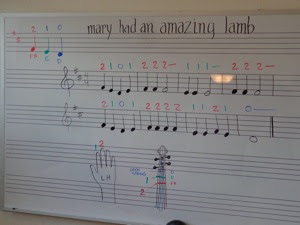 At first when there were just a few people trickling in one at a time it wasn't bad.  I would teach people how to handle a violin enough to make their way through Mary Had a Little Lamb and then they would go around to the front of the building where they would perform for a crowd and a camera.  A (from all reports) hilarious judge would declare whether or not the performance earned them the right to get their next clue and move on, and if not, they were sent back to me for more instruction. 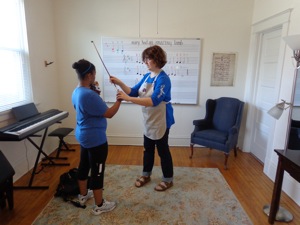 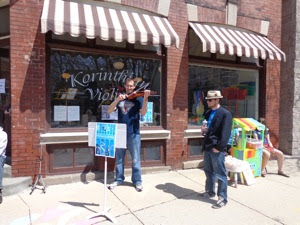 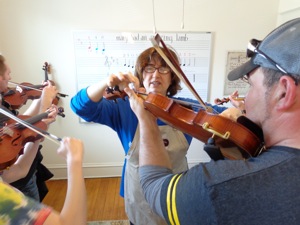 This got trickier as the crowds got bigger and at times I had four people at once in the studio.  For people who picked it up right away that was no big deal, but when I had some who were struggling I had to limit how many I could help.  Anyone with any violin experience was in and out of there fast.  A couple of people had never done it before but had a natural affinity.  And a few took a great deal of work.  My only complete failure was a guy who the judge declared to be so bad they sent his partner in to try instead so they could finally move on.

In the meantime, my kids ran a lemonade stand out front and totally cleaned up.  They made way more money than I did during a full day of work.  They sold lemonade, bottled water, and popcorn.  (Thanks again to my assistant, Robyn, for running out to the store for supplies and handling, you know, actual customers while I was stuck in the back.) 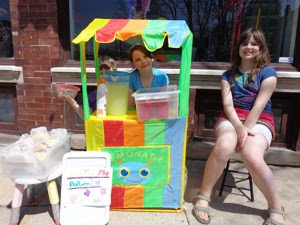 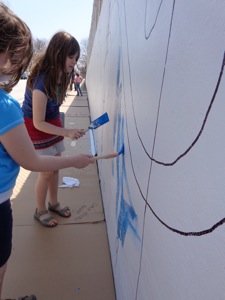 One of the things I really like about this race is they always incorporate elements that give back to the community as part of the course.  When I ran it a couple of years ago one of the challenges involved buying food to donate to the Hunger Task Force.  Among the things they did this year was paint a mural on the wall outside a neighborhood school.  The mural that was there was bad, and I've never liked looking at it down the street from my store.  The race volunteers painted it over, drew on a stencil of waves, and set up paint for the racers to fill in sections of it.  (When the racers were done the volunteers made sure to touch up any sloppy bits which I really appreciated.)  Before the runners arrived they were nice enough to let me and my girls paint a section, too.  The new mural is a big improvement to the street, and I like that we get to say we helped. 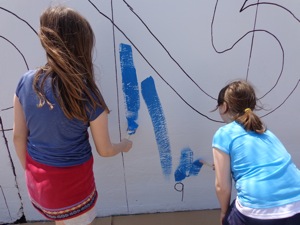 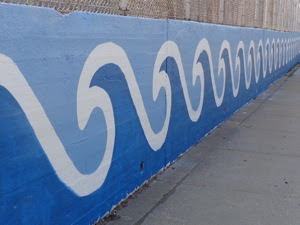 So, a busy day at the violin store!  There were a lot of people there who had never in their lives even touched a violin, so I hope they enjoyed it.  At the very least they should have a greater appreciation of people who play violin well.  And with a little luck more people are now aware of our small business tucked away in a residential neighborhood.  Maybe a few even got inspired to start making their own music!  I hope so.  That would make all the mayhem completely worthwhile. 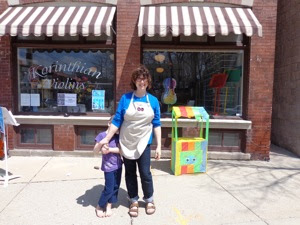 Posted by Korinthia at 8:21 AM