Well, Concord, technically.  I'm attending a week long workshop on violin varnishing.  It's something I've wanted to do for years, but after the VSA convention in the fall I resolved to find a way to make it happen.

I will miss Ian and the kids, but look at this wonderful necklace I get to take with me!

Our school had a fundraiser a few weeks ago, and in the silent auction was the chance to buy a necklace with a silver pendant cast from an impression of a fingerprint.  (Made by Jill Braun at Lillydip if any local friends are interested!)  I had to pay beyond my winning bid to get fingerprint pendants for all my kids done, but it was worth it.  I feel like I have a bit of them with me when I wear it.

The workshop should be interesting.  Varnishing a violin is about half the process of making one.  And in repair terms, varnish is considered sacred.  It impacts not only the look, but the sound and life of an instrument, and you don't tamper with it.  People who aren't aware occasionally come into my shop asking if I will alter the color or texture of original varnish to suit their taste and I have to tell them no.  It's not like a coat of paint that you can do over anytime fashion changes.  It's a signature and a statement and it marks a point in history.

Unfortunately, according to people at the top of my field, my signature needs a good penmanship lesson, which is what the workshop is designed to help me with.

Which is good, because I have not even gotten there and I'm already, um, feeling like I'm at the back of the class.  I'm nervous about a couple of things.  First of all, I figured out last night I screwed up the first assignment.

We were asked to bring two instruments to varnish over the course of the week:  One "in the white" (which means bare wood), and one with the ground coat completed (the underlying layers necessary before varnishing that seal the surfaces and/or establish some color).  I didn't have time to build instruments to work on, so I had to order some factory instruments in the white that I will complete and sell later in my store.

So, for the instrument that I needed to put the ground coat on, I decided to try the ground materials I bought from the varnish maker who runs the workshop.  Normally I just start with essentially watercolor to color the wood and then move on to my oil varnish.  But hey!  The whole experience is about doing something new, not what I already know, so I did my best to follow the instructions.  There were a lot of them.  I actually emailed the guy to get even more information because some of it wasn't clear.

I had a kit with seven jars in it.
The three on the right were optional colors, and I decided to opt out and keep it simple.

The four on the left had to be used carefully in the right order at least twice.  There is a basic jar of ground that you apply straight as thin as possible.  Once it was dry I was supposed to mix the one labeled "second" with alcohol in a 1:1 ratio and apply it.  After 24 hours I was supposed to do the one labeled "third" thinned 1:1 with turpentine, and same with the "fourth."  I did all four steps before leaving on vacation and when I came home a week later it still wasn't dry.  And it was shiny, which according to my instructions wasn't right.  So I tried to strip it back and that didn't go well.  And then I tried the whole procedure again, this time putting the instrument in a light box to help it dry faster.

Anyway, here's the fun part.  While packing up my little jars to take with me to the workshop, I discovered ANOTHER JAR. 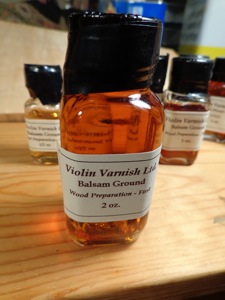 I have no idea how I overlooked it in the box, especially since it's bigger than all the others.  And it is clearly labeled "first."  So what was I using?  I DON'T KNOW.  I figured the one with no 'number' on it was the first one by default.  But apparently not.  And now there is nothing to be done about it because I am off to Boston!  Yes.  Ask me how confident I feel.
What else am I nervous about?  Well, one of the other workshop attendees emailed to announce he was bringing some quartet music to play with anyone who felt up to it.  A wonderful way to get to know people and have some fun!  Can't wait!  He's even bringing along some of my favorite pieces.  So what's the problem?  My viola.

I built it entirely to amuse myself.  Ian was deployed at the time and I was trapped at home with a preschooler, a toddler and a newborn.  I kept building instruments through that period as a way of maintaining any sense of my own identity and to distract myself from the fact that my husband was in a war zone.  But to do that meant working in fits and starts on little sleep and often in the middle of the night after a feeding and while children slept. 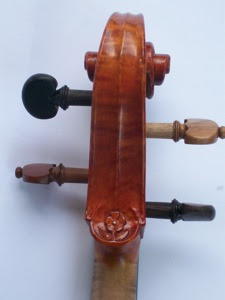 It has mismatched pegs because that made me laugh.  I carved a flower on the back of the scroll just because I could.  The corners aren't long enough and are too wide but I didn't care.  And the varnish?  It's considered garish but I just wanted something bright and fun.  I like the way it sounds and I built it around my hands and my reach.  Usually I'm happy to take it places to play.

But this is the one crowd that I'm not feeling comfortable taking it into.  Telling violin makers that I built my viola is a lot like telling people I'm originally from Detroit.  Nobody ever says, "Oh!  That's wonderful!"  When you tell people (who aren't also from there and don't know better) that you are from Detroit they always say, "Oh."  And then there is an awkward pause, followed by some odd combination of frowning and smiling.  Because really, they don't know what to say without sounding rude. 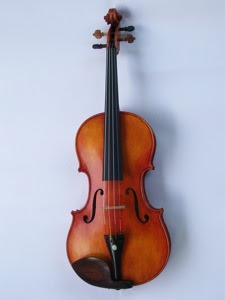 So, there's that to look forward to.  Because I decided to bite the bullet and just be brave and bring my instrument.  I have some difficult orchestra music I need to find time to practice anyway, so may as well.

I'm trying to go into this with no ego about anything and just be open to learning as much as I can.  I'm excited.

With a little luck I may make some new friends, and with a lot of work I hope to take myself one step closer to being the luthier I want to be.  Should be an interesting week.
Posted by Korinthia at 10:38 PM