Just got back from my trip to Boston Sunday night.  Could I have picked a weirder week to be in Boston?  No I could not.

Where to even begin?  I thought things were off to an inauspicious start when I arrived at the Boston airport and was unable to rent a car.  I figured how hard could that be?  Fly into a major American city and just, you know, get a rental car?  However, I was informed again and again that I was out of luck because of Marathon Monday and Patriot Day.  I had been unaware of the impending marathon, and I'd never heard of Patriot Day.  There turned out to be a car rental place next door to where I was staying and I was able to pick one up later, but the only thing they had was a Prius which took some getting used to.  (I never got comfortable with the idea that you didn't need a key to start the car and was constantly in a panic about remembering to lock the doors which is something I don't normally do.)

A friend from my college days was kind enough to let me sleep in her artist studio on Moody St in Waltham.  It was nice to spend some time with her, and I liked that I didn't feel as if I were imposing on her in her actual home which is in Watertown.  There wound up being other reasons it was good not to be staying in Watertown.

Concord is beautiful.  Boston in general is beautiful, but Concord felt like some Norman Rockwell throwback much of the time.  Children were on a break from school and they romped about happily in the grass and the buildings are all picturesque and toward the end of the week all the trees burst into bloom.  The only downside I could see (beyond the fact that the area looked expensive beyond belief compared to my vastly more affordable Midwestern lifestyle) was a sculpture outside of the Emerson Umbrella Center for the Arts where my workshop was being held.  It was a nondescript metal thing with parts that moved in the wind and it squealed like a rusty swing set.  If I owned the million dollar house across the street and had to listen to that all night long I would pitch a fit until someone got up on a ladder and hit the thing with some WD40.  So as far as troubles go, Concord didn't appear to have many, which made for a surreal contrast to the troubles in the city at large as they unfolded.

The Patriot Day parade goes right through the center of town.  This made getting to my workshop by car a bit of a challenge and I had to park on some random street far away, but I did get to see people marching in period costumes and carrying muskets.  Even olde time parades have the same silly inflatable plastic junk for sale on the sidelines, and I wished my kids could have been there.  I loved seeing all the families gathered for what was obviously a beloved tradition.  I got hopelessly lost on foot trying to get around all of it but was assisted by friendly people and eventually found my way.

I took a walk around Walden Pond during a lunch break one afternoon.  It's beautiful.  I've decided that I need to make plans to take my kids to more historic places during our vacation breaks.  We tend to visit family given the chance, but I want them to walk the Freedom Trail and stroll through Minuteman Park and see the kind of historic landmarks that are around every corner in a city such as Boston.  I think they are old enough to appreciate that kind of trip now, so we need to make it happen.

The experience of being in the varnish workshop was very insular.  There were just over a dozen of us and we were deeply absorbed in our work.  No TV, and radio and internet were sporadic at best.  At some point on Monday during a demonstration outside a couple of people started getting information on their phones about some kind of explosion at the marathon.  I didn't hear anything further until my drive home.  The only real news I got was on the car radio while going to and from Concord.  It was very hard to tell how much of the marathon bombing news was a national (or international) story, or if it was dominating everything there because it was local.

It was definitely strange knowing that friends and family back in Milwaukee likely knew more details about all of it than I did actually in Boston.  I saw some still photos online that I wish I could unsee.  I teared up anytime I saw a picture of the 8-year old boy who was killed.  I caught a bit of footage of the explosions on CNN in the background in a restaurant that night.  I heard President Obama's words later in an interfaith service, and a bit of Yo Yo Ma playing cello.  But other than that I was not being saturated in news about that (or any other) tragedy.

And I have to say, it was a relief.  I remember hearing after Columbine that one of the problems for children following such an event is that they don't understand when the news replays footage on an endless loop that it isn't still happening and they remain perpetually frightened.  I'm not sure it's any different for adults.  9/11 was one horrible day, but in my mind it feels like years of horror somehow.  Sandy Hook about destroyed me.  The bombing at the Boston Marathon?  Just felt like one awful day.

I'm torn about how we process such tragedies anymore.  On the one hand, it seems like a disservice to those who have suffered not to hear their tale.  To turn your back seems cruel.  It seems fitting on some level to wallow in loss alongside those who are grieving.  But at some point it is simply borrowed pain, and maybe is not appropriate.  All I know is with the tragedy in Boston cut off from me as I buried myself in work there, I did not feel emotionally dragged down as I might have been if the events were relentlessly replayed for me hour after hour for days on end.  I may have to be smarter in future about learning when to shut the news off.

There was a sense of shock, sadness, and apprehension in the area in general after the bombing.  The attitude in the workshop was to pursue beauty and excellence with a vengeance as a response.  I think when confronted with destruction and death it's healthiest to concentrate on living life while we have it.

So I did.  In addition to my work I made a point to get out and connect with others.  Beyond the people in the workshop I spent some time with a cousin on my dad's side in the area that I seldom see, met the writer Jane Roper (that's it's own post), and shared family fun with my brother and his family at a mutual friend's. It was draining to do that much socializing after so much intense learning each day, but it was great.

The bombing downtown impacted the arrival times of some of the guest speakers at our workshop.  Valuable instruments were trapped in stores in zones that were blocked off for investigation, but eventually we got to see them.

The strangest day by far was Friday.  I was oblivious of the shootings in Watertown the night before (all within blocks of my host's home there), and did not know that I wasn't supposed to leave Waltham until I was halfway to Concord.  The traffic was surprisingly light, but I thought that was because I was getting an earlier start than usual.  It wasn't until I heard the words "shelter in place" and "lock down" on the local radio that I realized I had narrowly missed being trapped in the studio where I was staying.  My fellow workshop participants were a little surprised to see me.

I spent the day working hard on my projects and checking online resources when possible to figure out if I would be able to head back at the end of the day.  By the evening the shelter in place order had been reduced to just Watertown, and I drove out to meet Jane.  Right as I pulled onto her street people on the radio began to cheer the capture of Suspect Number 2.

I have mixed feelings about how everything was handled.  On the one hand, it's stunning and reassuring that a city could stop everything and find those suspects in a matter of days.  But my friend's eyewitness accounts of being ordered to stay in her home as heavily armed government agents swarmed her area and forced neighbors to the ground at gunpoint are disturbing.  Part of me can't help but wonder what would happen if we treated every violent homicide in this country with the same swiftness and severity.  We're selective about whom we memorialize and avenge.  I've often wondered about people who lost loved ones on 9/11 but not in the terrorist attacks.  Their pain is just as real, but overlooked. 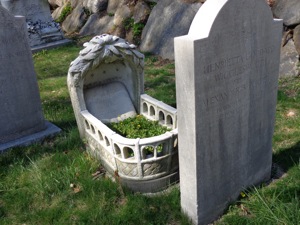 My last day in Boston my friend and I walked around Mt Auburn Cemetery.  That sounds maybe a bit dark, I know, but it was designed by the same man who did a cemetery in Cleveland that my friend and I walked around together years ago, and the experience was beautiful and peaceful.  Everything was beginning to bloom, and the juxtaposition of the new and the old, the past and the present, the living and the dead, was a poignant way to end my week. 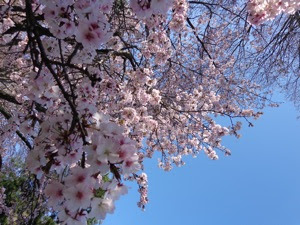 That, and I made sure to eat a Dunkin' Donut in the airport before I left.  I have never seen as many Dunkin' Donut stores in one city in my life.  I didn't realize Boston was its home.  My friend told me during the lock down in Watertown the Dunkin' Donuts was the one thing the police kept open.  (The setup for a joke there is too obvious so I'll just leave that alone.)

On my flight home I passed my Rubik's cube to a small girl in the seat ahead of mine.  She would scramble it and pass it back, and I would fix it and hand it forward again.  I like kids in general but I powerfully missed my own at that point.  When I got back to our house they were all sound asleep.  I kissed each of them and they didn't stir.  I noticed Quinn had turned his upper bunk into a small library.  I wondered what else I'd missed in my week away.

I had an unforgettable trip.  And I'm glad to be home.

Posted by Korinthia at 9:06 AM