A couple of weeks ago I found a rubber ball.  Lost in a deserted ballroom in a hotel, it was sitting in a corner after a rehearsal, and I took it.  It didn't strike me as something that would be reunited with its original owner if it went to lost and found, and rather than have it languish there it seemed better to make sure it got played with. 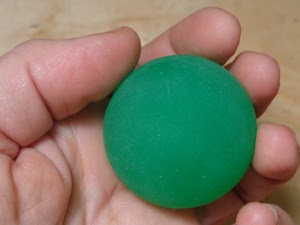 This is a perfect ball, in my opinion.  How can one resist?

The next evening Quinn and I were waiting in the lobby of the Conservatory before his piano lesson.  We were early and he sat slumped in his chair swinging his feet.  Normally we do a Sudoku puzzle together but he wasn't in the mood for it that night.  Then I said, "I have something fun."

Quinn looked doubtful.  "Why is a ball fun?"


So I pulled the ball out of my bag and his eyes grew wide and he literally clasped his hands together with joy.

I tossed it to him and when he tried to catch it he missed and it hit the ground.  It bounced a bit until it lay still on the carpet.  He picked it up and let drop again.  Eventually after several repetitions of bouncing it on the floor in front of him he was able to catch it every time.

Then I pointed out the staircase.  There wasn't anyone else in the lobby and there wasn't much that could be disturbed by keeping the ball low to the floor, so I asked him if he wanted to roll the ball down off the landing step.  Quinn lit up and rushed to the top of the stairs.

We took turns being the one to release the ball and being the one to catch it at the bottom.  The goal was to see if we could get it to bounce on every step all the way down, because I figured that was a good way to keep bouncing a ball indoors from getting out of control in a fancy place.

After a few rounds of that I showed Quinn a handicap ramp around the corner.  I challenged him to roll the ball as far up as he could and still have it roll back to him.  He loved that.

He was disappointed when we had to put the ball away when it was time for his piano lesson, even though he was excited about playing his songs for his teacher.  He asked, "Can we play with the ball again later?"  I promised him we could.

The next day while waiting during each of the girls' violin lessons I offered to get out the ball, and Mona asked, "What's so fun about a ball?"  Quinn said, "You'll see.  It's a really fun ball."  So I pulled out the ball and Mona smiled and agreed it looked like a great ball, and she and her brother commenced some game that involved rolling it across the floor to each other, their legs spread wide to block it from going astray.

Then when Mona went in for her lesson and Aden appeared, Quinn bounced the ball for a while on the stone surface in front of the fireplace.  He wanted to know why it bounced better and more quietly on stone rather than wood.  I gave him my best guess (something vibrations something something density), and then Aden wanted in on some of the fun with the ball.  The two of them rolled it everywhere and laughed.

Now, it's not like my kids have been deprived of balls up to this point.  They have many many many balls.  But they've also been sucked into their computer more than usual lately.  And they forget sometimes how much they enjoy other things that have been out of sight for a while.

I get why they enjoy time on the computer.  I'm certainly on mine enough, and I don't like to be without it.  It's where I write my blog and novels and connect with people for both fun and work.  I like that my kids have their own little online lives and enjoy certain sites for kids and games and YouTube channels.  But next to what is considered typical in our society anymore, we are comparatively Luddites.

We don't have cable.  We don't have any kind of gaming system.  (We used to play Frogger and Pitfall II until the Atari broke.  Can people still fix those?)  We don't have a satellite dish or a Wii or any little handheld games.  We don't play music off an iPod.  (My kids play records and sometimes CDs.)  We don't have iPads or a Kindle or tons of interesting things that I'm probably not even aware of.

We don't have smartphones.

This is not to say I have anything against any of that stuff.  It's fun.  I may have to wait until certain shows hit Hulu or Netflix before I see them, but I don't feel deprived of any good programming.  I think I type too much to want to use an iPad over my laptop, but they look cool.  My phone is just a phone (not a camera or anything) and I don't text.  (The one time I tried to text I accidentally only sent the word "loom" to my cousin and that was enough of that.)  I'm always sitting next to a land line so I generally don't even know where my cell phone is.  My husband uses gadgets on his phone and has been known to text people so he's ahead of me there.  I think a tool is only as useful or wasteful as you choose to make it.  And the truth is in a few years we may end up with smartphones by some odd default.

I worry a little about how attached people seem to be to such devices.  I get it.  I resist because I don't like what I see and I know how easily I could get sucked in, too.  I have friends and relatives who I don't think could go an hour without fondling their phones without getting twitchy.  Phones and apps are fine, but being able to set them aside should be fine as well, and increasingly it's not.

When I met my (now) husband in college in pre-cell phone days everyone relied on the phones in their dorm rooms.  They were touch tone phones mounted by the door with a red light that went off along with the ringer.  Once when I was visiting Ian in his room a guy from down the hall came knocking, irritated because he'd been calling repeatedly and not getting an answer.

When the guy from down the hall checked and realized Ian had shut the ringer off on the phone he looked like he couldn't fathom it, and Ian said to him quietly, "There's a beautiful woman in my room and you think I should be answering the phone?"

When Ian shut the ringer off the phone it was like saying there was no one else in the world with anything to say more important than me.  I love that.  It still makes me smile in a way I feel in my whole body when I think of it.

People checking phones under the table when we're together?  They give me the opposite feeling.  It's like anything in the world is more important than me.  I don't want to become that.  Although I'd like to think if I got a smartphone I would know better than to ignore real people in front of me for the promise of something new popping up on a screen.  But people I adore who should also know better can't help themselves much of the time.  So for now I'd rather not be tempted.

I'm not purposely keeping my kids from technology.  They can play Wii at their friends' houses and borrow their cousin's iPad when she's in town.  And as they get older and their social lives are such that texting (or whatever comes next) feels necessary to not be excluded we'll indulge them in something I'm sure.  That's fine.  Will they resent us later for not equipping them with everything earlier?  I don't know.

But in the meantime, how sweet is their delight over a ball?  They have fun on their computer, yes, and they often sing along with it and laugh (and I don't limit their time on it unless they've gone for a stretch where I fear for their eyesight), but it can't compare to looks on their faces when they are playing with a ball.  Or duct tape.  Or a board game.  Or piano.  Gadgets wouldn't eliminate those things, but would take up available time for them.

Electronic gadgets are so alluring.  I'm sure if we had video games at home I would enjoy it.  I can waste time playing Tetris with the best of them.  But I feel better if I'm building a violin.  Or reading.  Or rolling a ball down the stairs with my son.

I won't be able to keep certain distractions at bay forever, but for now?  I'd rather pull a ball out of my bag to entertain my kids than a cell phone.