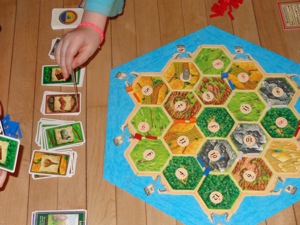 I like games.  I've always liked games.  And I'm thrilled that my kids are finally old enough to play interesting ones so that I don't have to suffer through Candyland anymore.

The family card game is called Spite and Malice.  At the cottage we like Apples to Apples Jr and Monopoly.  When my mom's in town we play Cribbage.  Last year we were introduced to Set.  (I love Set, and Quinn and I do the online version regularly.)

But the big obsession of the moment is Settlers of Catan.  I bought it years ago (when Ian was deployed the second time) on the recommendation of my brother who had read good things about it.  We tried it once when he was visiting along with a friend of his who thought he remembered the rules.  It seemed like it could be fun, however it didn't get a fair trial back then because we really didn't know what we were doing.

But a friend of mine down the street does a regular game night at her house and I've been lucky enough to be invited from time to time, and upon spotting a Settlers of Catan box in the pile of games I asked if she could teach it to me.  I'm not great with reading rules, I need to learn a game by just doing it.  My friend set up an evening where I could come over and give the game a whirl.


Turned out to be a really enjoyable, well-designed game.  The board is composed of hexagons that you can rearrange every time if you want to, so it can always be a little different.  And there are little disks with numbers that assign the various hexagons a value that can also be rearranged.  You roll dice, collect cards, use resources to buy roads and settlements and cities, and the first person to ten points wins.

But the actual play is so much fun we sometimes forget to check the points.  When someone wins everyone else always asks to keep playing.  Even Mona enjoys it, and she seldom has any patience for games.  Quinn loves Settlers of Catan (he's usually the one to assemble the whole board before we begin), but still struggles with strategy, so his sisters often volunteer to continue playing until he reaches the necessary ten points to declare him a winner too.

I'm quite sure we play a sweeter version of the game than most people.  (My kids did manage to play the only game of Monopoly I've ever experienced where the bank finally lost.) 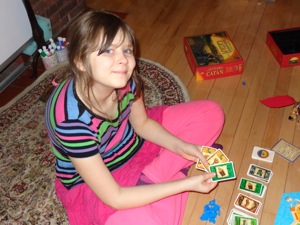 Every time anyone rolls a seven you are supposed to move a piece called "the robber" and wherever you move it, it puts a hold of sorts on that property, and you get to steal a card from someone adjacent to it.  The only neutral spot is the desert from where the robber begins.  At any given opportunity my kids return the robber to the desert, and if they have to put him somewhere else, they find a spot where he can't harm anyone, and they nearly always forgo stealing.  You'd think this wouldn't get you far in a competitive situation, but Aden has won many games while still being generous and helpful to everyone on the board.  (We soon discovered, however, that designing the game to end at ten points was smart, because once you reach that point your potential for accumulating wealth snowballs and becomes rather ridiculous, so Aden after a win more often than not simply gives Quinn all her cards at each turn to give him a fighting chance to catch up.)

My kids like the interactive aspect of the game because you can trade with people, and they like to collect things.  It's fun that no matter who rolls the dice it affects everyone so there is something to do all the time.  I like that there is no single strategy for winning so you have to adjust based on how the board is configured and how things unfold.  It reminds me of how people who can't solve a Rubik's cube often assume there is a set way to fix it when, in fact, the puzzle is a bit different every time.  That's why it remains interesting.

I don't know how long this particular game will hold everyone's attention, but I'm really enjoying having all of us gathered around the board together a few times a week.  I'm even debating picking up an extra set to keep at the cottage.  In any case, a good family game!  If I'd understood it earlier we probably could have played it with the kids when they were much younger (but probably without "the robber" to make it less frustrating, and turn rolling sevens into a hug or a high five moment).  So if you like games and are looking forward to something other than Hi-Ho-Cherry-O, I recommend  Settlers of Catan.  (It's worth it just to hear your kid say things like, "All I have is sheep.") 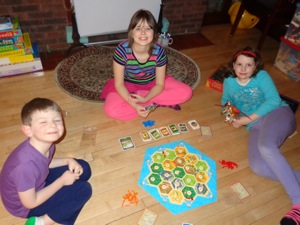 Posted by Korinthia at 7:34 AM