A Pianist in the House 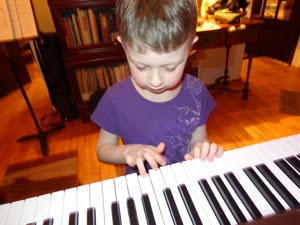 I have been offering him the chance to take lessons on either piano or a violin family instrument since he was two.  (I know two sounds unrealistic, but in Quinn's case if he'd been interested I have no doubt he would have been just fine.  He's always been a serious, focused kind of child.)

I don't believe in forcing children into music.  I think everyone should have a certain amount of education in it in order to appreciate it better, but playing an instrument is hard and without an internal passion to want to pursue it the result is joyless, so what would be the point?  I let Aden beg me for a year to take violin before I finally pulled one off the shelf at the violin store for her and got her a teacher.  (And no, I don't teach her myself because that is fraught with danger, plus I think a relationship with a music teacher is special and I don't want to deprive her of that.)  Mona started violin because Aden plays violin, which isn't the ideal motivation, however there's nothing wrong with it either.  They both enjoy it, and though Quinn has happily sat in my lap to watch them practice, he never expressed any interest in trying it himself.

But then came the report card.  A few categories marked less than perfect and Quinn was on a mission.  We conquered shapes and we conquered oceans because the boy likes to check things off a list.  Then he wanted to conquer music.


He'd never been willing to sit down and let me show him anything about music before, but that night he let me show him how to find notes on a staff and how to translate that to a keyboard.  I wrote out a couple of simple tunes and he was delighted to be able to follow the notes on the page and turn them into songs he knew.  It was a new kind of puzzle and he wanted more, so I suggested we find him a teacher and he agreed.

I asked an accomplished pianist I know at the conservatory if she was aware of any teachers in my area of town, and she said no, but that she had space in her schedule and would be happy to take on Quinn.  I knew better than to pass that offer up, and so far it's working out well.

I've always felt piano would be a good fit for Quinn.  There is something so organized about the layout of a keyboard, and reading music is something new to decode.  He asks me all the time for new terms and likes to be quizzed about different time signatures and more notation.  Here is his first attempt at composition, which was mostly an exercise in learning to match the number of beats in a measure to the time signature.  (I did the top staff and treble clef and he did everything else.) 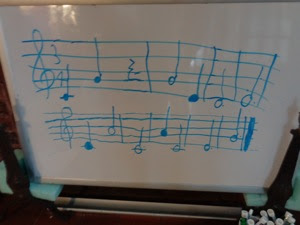 I expected Quinn to do well in his lessons because he does well at most things he sets his mind to, but what surprised me was how fast he outgrew any need for my help.  I've always wanted to be able to play piano so I figured I could kind of learn along with my son when I helped him with his practicing. If I don't remind Aden to practice she seldom thinks to do it on her own, and Mona always needs coaching when she's assigned something new, but Quinn happily practices on his own.  After the first couple of weeks of sitting next to me at the keyboard he soon got irritated with my inability to resist jumping in to make suggestions or corrections.  He wants to figure things out by himself.  He still wants me to sit with him because he likes my company, but I'm not supposed to say or do anything.  More often than not anymore by the time I get home from work he's already practiced at least once.  And he's doing fine.

Will Quinn need me for anything soon?  If he finds someone else to hug I will be obsolete before my next birthday. 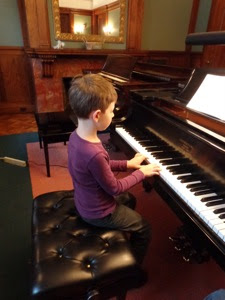 That cliche about it all going by fast is not one to roll your eyes at.  Raising children is strange because the individual days seem to drag but the years fly by.  It's hard for me to get my mind around the fact that the little boy whom I can trust to find his way into the conservatory alone while I go park the car is the same little boy in my memory who was a fragile bundle so recently.  He's capable of so much already and he's only in kindergarten.

But the wonderful thing about piano, if he sticks with it, is it can remain an endless challenge.  Unlike many of the things he's learned and then tired of, there is always another step to take in music.  Another piece to play, another style to try, other people to perform with and learn from....  Music is an exquisite balance of discipline and whimsy, of serious effort and joyful play.  I've wanted that for all my children and I'm glad Quinn finally found his own musical voice.  He improvises for long stretches and it's lovely to hear.

I hope piano holds Quinn's attention long enough for it to become a part of him.  Because the thing about playing an instrument is that at some point in the process it changes from something you do to something you are.  "Musician" is an identity, not an activity.  You go from playing on the piano to becoming a pianist.  The learning curve for Quinn is such I suspect that after only a couple of months in he is well on his way.

Posted by Korinthia at 3:04 PM