I just got back from my girls' choir concert.  This is how they look during a concert:

(I suppose there should be a prize for anyone who spots them in there, but I'm not even sure where Mona is now.)

This is how they look right after a concert: 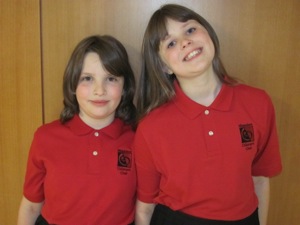 Anyway, the entire reason for this post is just so I can remember that Mona misunderstood the lyrics to one of the songs Aden's group sang.  It was from a Harry Potter movie that used Shakespeare lines and went "Double double toil and trouble...."

But Mona kept singing it as "Double double toilet trouble."  Which is now one of my favorite things ever in the history of music. 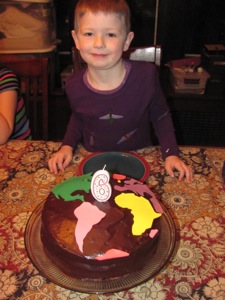 Quinn also turned six this weekend.  Six.  Six!  (I don't think you understand how shocking it is that my little barnacle boy is now an entire six years old.)  And he's been non-committal about everything lately so he didn't have an opinion about his birthday cake other than he wanted it to be chocolate.  Seeing as he's a geography genius I went with a basic map of the world.  (The sugar paper cutouts I made didn't fit as planned when I went to put them on the actual cake, so there was a bit of continental drift happening and the UK had to be sacrificed, but considering the ocean was dark chocolate and the earth's core was all chocolate and custard filling no one complained about this particular representation of our planet.) (I just can't believe we now have a theme song for the next time our toilet backs up...  Double double toilet trouble.  Hahahaha.)

Posted by Korinthia at 8:46 PM