I will admit that I did not take advantage of enough of the opportunities presented at this year's VSA convention.  A lot of the best discussions happen during off hours at the bar, and I just don't do that.  Add a pool table and I'm there, but I don't drink and when I'm tired I'm not good at socializing.  I should have put myself out there more, I should have attended more of the things I didn't think applied to me, and I should have asked more questions.  All that said, though, on my long drive back to Milwaukee I came to realize what the impact of this convention has really been.

It has been life changing.

In terms of my work, anyway.  I learned where I am in my instrument making, and where I need to go.  I am at a new and exciting phase.

(The competition room after judging--there were more than 500 entries this year.) 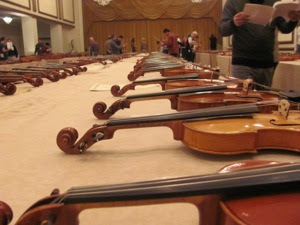 I did not win a prize, nor did I expect to.  I'm still too early in my career as a luthier to have earned that yet.  What I went for was to be able to talk to builders and violin experts at the highest levels to give me a critique.  It's hard working at my craft essentially in isolation and without regular feedback.  I don't have anyone to turn to in my shop at night while my kids sleep in the room above to let me know if I'm going too far with something or not far enough.  I wanted input.

And I got it.  Both from a fellow builder who did win awards again this year, and from an official judge who was kind enough to look at my instrument outside of the designated sign up times for critiques because I needed to leave early.  They were both thoughtful and specific in their criticisms, encouraging in their remarks, and in independent agreement about my strengths and weaknesses.

So what did I learn that was life changing?
That it is time to let go of some elements of my training and trust myself more.

When you are in violin making school everything is terrifyingly precise.  They are trying to teach you how to see, and to do that things are kept to exacting standards.  There are measurements that you do not deviate from, even by a twentieth of a millimeter.  You follow steps in a rigid manner.  Honing your skills has everything to do with repetition and accuracy and very little to do with creativity.  You want to have control over your hand tools like a machine.

I know for a fact that the scroll I carved for my competition instrument had pegbox walls that conformed to Chicago School thickness standards.  I was careful about that, and checked my measurements ruthlessly.  But nobody liked it.  It was technically one person's idea of right, but in the end wasn't what I truly wanted to do, and wasn't as aesthetically pleasing as it could be.  The judge advised thinner walls all around, and suggested a measurement for the bottom of the walls that shocked me.  But I think he's right.  In school the measurements are heavy to provide a certain amount of wiggle room.  It's good to have a cushion when working with wood since it's hard to undo if you remove too much.  But at this stage the cushion is beginning to smother me.

The biggest revelation was when I found out a fellow builder approaches certain steps in a different order.  A criticism I'm used to getting has to do with the alignment of my corners.  And when I was asked how they got placed where they did I mentioned something about how everything is fine at the temporary gluing stage and then gets wonky for me at the permanent gluing.  He didn't know what I was talking about and had me explain why I was adding extra steps.  Suddenly I didn't know why either.  His way made more sense.  I have to rethink several other steps to accommodate doing things in a new order, but I can't wait to try.  I honestly believe for the first time that I may get control over my corner problem.

Now, none of the criticisms of my work at the convention have much to do with how my instruments are received in the real world by actual musicians.  The kinds of touches normal people find charming tend to be regarded as garish by judges, and nobody who is not in the business cares a whit about corners.  My alignment issues don't affect sound or playability and are never noticed by anyone looking to buy something in my store.  I do not have trouble selling my instruments.  And the first thing my fellow builder said after studying my entry was, "This is a very beautiful violin" which made my week.  But there is a long list of things I need to improve upon.  If there weren't that means there is nothing left to learn and at that point it wouldn't be worth doing anyway.

So I have reached a stage where I need to let go of some of the rules and measurements I have clung to as gospel and do something new.  I need to trust myself to take what I know and finally be more creative with it.  It's a little scary, but mostly exciting.  I will probably make mistakes but I'm ready for that.  My goal for the new year is to take some of that beautiful new wood I bought and just dive in.  I need to make time to just build at a pace that I haven't enjoyed since before I started having children, because only by doing it over and over with some consistency will I get any better.

It's time to go in a new direction.  I can't wait to see where that takes me.

Posted by Korinthia at 6:09 AM