Some days I think I do some pretty thoughtful writing here.   Other times I use this space to dash off something that amuses me.  Today is a messy hodgepodge of things I would like to write about better, but will be lucky if I simply get jotted down in the proper order so I don't forget all of it completely.  Some weeks are like that.

This was the first year since we've lived in Bay View that we were able to make it to the Pumpkin Pavilion in our nearby park.  Dozens and dozens of carved pumpkins lit at once, live bands, a magic show....

It was really fun, but we had to leave early because we wanted to also attend an art show downtown that a friend of ours had work in.

The show was very nice, but my husband and I were mostly taken by just how much activity there is on a Friday night in Milwaukee.  We are more than a decade removed from, well, going anywhere that doesn't involve a bouncy house as a good time, and there were so many people out and about and doing things after dark.  There were nighttime tours of some sort happening, horse-drawn carriages, people in costume (and not because of Halloween), a pedal tavern (a multi-person bike thing that is also a bar that I'm sure will get ticketed for open container violations if the cops can just catch it as it weaves its way through the city), and all manner of things going on.  Ian and I vowed we will go out and be part of some of it one day.

We've had a lot of guests lately.  My parents, brother, and a friend were here to attend a convention at the end of September, my mother-in-law was here for a week in mid-October and we threw a little birthday party for her, and then my parents, both brothers, my (future) sister-in-law, niece, and a dog came for several days.  That last visit revolved around my mom's birthday, and both my brothers and my mom agreed to let my kids dress them up.  Trick-or-Treat happens in our neighborhood for some reason on the Saturday evening before Halloween.  (Don't ask.  I think it's stupid not to have Trick-or-Treat on Halloween, but at least it's at night as it should be, as opposed to the rest of Milwaukee that does it in the daytime on Sunday afternoon.) 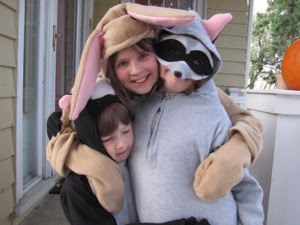 When I told my dad that my kids were going to be a kangaroo, a raccoon, and a skunk for Halloween he said those things didn't sound very scary.  I contend that if I ran across any of those things in my living room it would be terrifying. 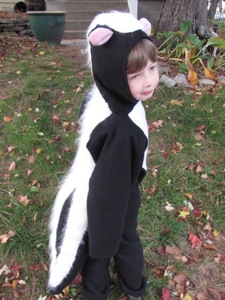 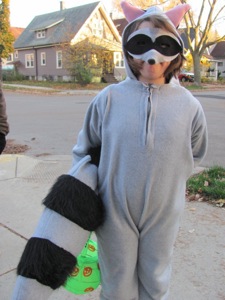 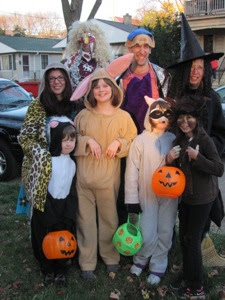 There was a matinee performance of Carmen happening on my mom's birthday, so ten of us went to that.  We had a weird experience at the beginning in that part of our group spent the first act in the balcony (where our tickets actually said we were supposed to be) and the rest of us were mistakenly in the mezzanine.  What are the odds that the same row of ten seats were free in the better area?  Odd.  Anyway, we all sat together in the mezzanine for the rest of the show, the opera was beautiful, and the kids were great.  Despite the show being all about sex and death I still figured this was a good introduction to opera for my children because the music is so accessible and familiar.  Quinn slept almost the whole time.  Mona LOVED it.  She watched most of it through binoculars and thought that was just the best.  Aden was unsure how she felt.  I know she enjoyed the singing, but she's old enough to find the themes of the story disturbing.  My niece turned to me at the first intermission looking confused and saying, "Carmen doesn't seem very nice."  And I had to explain that, no, there weren't any good role models in the story, and Carmen was definitely not nice.  Welcome to a tale that hasn't been Disneyfied yet. 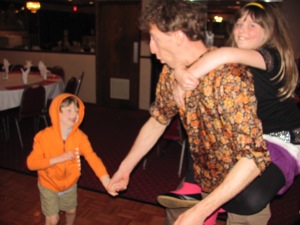 After the opera we went out to dinner at a favorite Indian restaurant where we ordered way too much bread and dosas for the kids that they barely touched.  It's still their favorite place to go eat, though, because in the back room there is a little dance floor, and if we are the only people back there we let them run wild.  They were all so quiet and lovely during a four act opera that I figured they deserved to just whoop it up.  The biggest whooping, however, is all from my brothers.  They are the funnest uncles imaginable.  They are funkles. 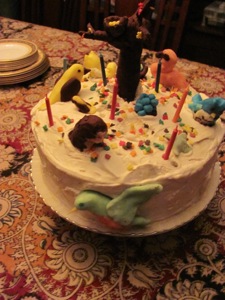 Afterward we headed back to the house for cake.  The kids all made decorations for my mom's cake out of modeling chocolate.  (10oz of melted chocolate mixed with 1/3 cup of light corn syrup and put in the fridge for an hour makes for edible candy clay that keeps small hands busy for a long time.)

Other things I have no time to go into but want to remember are the Halloween dance, weird interaction between our dog and the guest dog, and another trip to the mysterious bookstore.


The unexpected element of this visit was that it was extended due to the hurricane that hit the east coast.  My brother and niece live in Manhattan and were stranded with us for a few extra days.  Except for the fact that they were missing actual Halloween in New York they had a good time here.  (My brother's wife was stranded in Paris---I know, very sad---so it's not like my niece was worried about her mom during the storm and that helped.)

My brother got a very helpful message from Delta saying his flight had been canceled, and that if he wanted more details to press one.  Upon pressing one Delta told him his flight had been canceled.  The first night when Arno tried to look into rescheduling he was informed that the wait time on hold was going to be six to nine hours.  (He decided not to wait on hold.)

Instead my niece got to go along with Mona to her class for a day, and along with Aden on a field trip on another, and even got to attend one of my Pajama Jamboree concerts.  She also got to have her head inspected for lice because the fun in Milwaukee never stops.

So now everyone has driven or flown away and we are trying to remember exactly what it is we do when it's just us here.  Mona asked me yesterday, "So when do the next people come?" and I told her that was it for a little while.  We'll meet up elsewhere for Thanksgiving and then there will be birthday and holiday mania, but this week we're on our own.  It's nice, but I miss everyone.  In my ideal world I'd get to pop over and see my relatives whenever I like and have them to dinner without it having to be a big sleepover production.  But I'm just lucky to have such a fun family, so I won't complain.  If my biggest problem is wanting even more of what I already have then that's not really a problem.  It's a nice life, and I know it.
Posted by Korinthia at 6:39 PM