When I tell people I build violins, after we get past the questions about wood and how long everything takes, they usually want to know where the very first instrument I built is.  The answer has never been particularly interesting because I didn’t feel as if I should sell it, so I had it on long term loan to the music therapy department of the conservatory where I teach.  One of my dearest friends uses it from time to time with some of her clients.
But now I have a cooler answer: I think it’s been stolen! 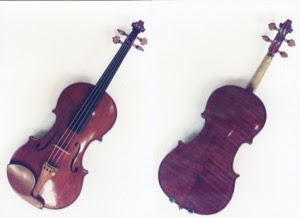 (My first violin, front and back views.)


Sometimes when we team teach a violin/music therapy student, we pull out my violin to use.  When we’re done I leave it for my friend to put away again, but something went awry the other week and distractions happen and the instrument got left in the room.  And now it’s gone!

My friend, of course, is upset and embarrassed, and I don’t mean to write this so that she should feel worse, because I don’t want her to feel bad.  I forgave her before I even knew about it if such a thing is possible.  If anyone is a decent enough person to deserve a free pass, it’s my friend, so I really am fine.  And now my first violin has a new mystique!  I mean, seriously, when people ask me about my first instrument I can say it’s been stolen!  That’s actually interesting.

There aren’t that many places you can take a violin to in Milwaukee, so I wonder if it will come through my door for repairs or an appraisal.  How wild would that be?!  Ian says if it does we should get a nice photo of the person with the instrument before finding some excuse to hang onto it.  That’s way more exciting than it sitting safe and sound at the conservatory.  Where is it?  What is it doing?  Is someone at least playing it?  Does it sound good?  Does someone feel bad about playing a stolen violin, or is it exciting?  I’m intrigued.

But the whole thing got me thinking about our relationships to the things we make, which includes children.  I forget sometimes that my husband and I made our children because I honestly think of them as making themselves, which is closer to the truth.

I started thinking about that way back when I was a kid and I begged my parents to let me watch a made for TV movie one night.  I had gotten completely sold on the idea that I must watch ‘Loving War’ starring Cheryl Ladd.  I had never heard of Cheryl Ladd, but the ads made it sound very important that she was in it, and I remember trying to convince my dad to let me watch this movie!  Because no child should miss it!  And it starred Cheryl Ladd!  I can be such a sucker.  My dad remained unimpressed by the star power of Cheryl Ladd but did say I could watch the movie, which was essentially the tale of a single woman raising a daughter and the tension that ensued.  I remember in particular a scene where Cheryl Ladd is inspired by a mother and daughter happily buying material together to make dresses and she tries to reproduce the scene with her own child but it just ends up in a fight.  Anyway, the heartfelt theme song to this must see TV drama had lyrics that went, “(something something) my flesh, my blood and my bone, something I made that I don’t own, (something something) Kind of like a loving war.”

(And by the way, I have now checked the internet for this oh so fabulous drama and I’m starting to doubt my sanity because it is nowhere in Cheryl Ladd’s filmography, but I remember it!  I do!  I swear!  I can hum that tune that I still remember a few of the words from.  And trying to use the name of Cheryl Ladd as a selling point to my father who would not have watched Charlie’s Angels if you had held a gun to his head is the only reason I know her name to this day.  So either I invented it, there is a cover up involved, or the internet has not done a thorough enough examination of the work of Cheryl Ladd.  I have no idea.  Anyway….)

I was really struck by the idea of a child as something you could make but not own.  My grandmother ran into people through the adoption agency where she worked where that was an issue.  There were people with no investment in the lives of children they had made who nonetheless felt entitled to them on some level that had to do with ownership.  I remember one story in particular of a boy in foster care whose foster parents desperately wanted to adopt him as their own, but the biological parents lived out of state and performed the bare minimum number of duties necessary to prevent themselves from technically losing their rights.  They would make one brief visit a year and then return to their lives secure in the fact that the child was still theirs, and leave the actual parenting to others.  My grandmother believed the loving thing would have been to let him go, but she said some people can’t give up on the thought that something belongs to them, even if it’s a person.

In terms of objects, questions of ownership aren’t always straightforward either.  We used to have discussion in our home about what obligations are involved in owning art.  There was a collector back in the 90’s who supposedly asked that he be buried with a Van Gogh painting he paid millions for.  For all kinds of reasons that’s wrong, but is someone really entitled to do that?  It’s already questionable in my mind for private collectors to squirrel away great works of art out of sight from where the public can appreciate them, but can you destroy them?  Is that legal?  If you own a Strad how much are you entitled to do with it?  Most people who play expensive instruments like that don’t own them outright and are under contract to have them only worked on by certain people, so the risk is small that anyone would ever deviate from what was appropriate, but what if you did own it?

Actually, the crazy part of important instruments like that is they own their players in a way.  They have stories centuries long, and if you are privileged enough to play one you become a chapter in their book, not so much the other way around.

But what about things you make yourself?  This gets us back to my violin.  (Which, did you hear?  May have been stolen!)  People are often surprised when I tell them I don’t miss the instruments I build when they sell.  I will make more.  They are not intended for me.  They are supposed to be out in the world making music.  My interest is always in the next instrument, the one I haven’t built yet.  I want to make lots of violins, not own lots of violins.  It’s the process of creation that excites me, not collecting.  I like the viola I built for myself, but if some other player fell in love with it and asked to buy it, I would be thrilled to send it off toward new musical ventures and I would pull some spruce and maple out of my woodpile and make something new.

We talked about this a bit at our last parent/child book club meeting.  At the end of Little House on the Prairie, it’s kind of shocking after everything they built and everything they survived that they had to up and abandon it all.  The house, the stable, the well, the farm….  They worked so hard, but because the land they built on was in a disputed territory, they packed up the wagon again and left.  In the book, Pa doesn’t seem overly concerned.  He’s confident that they can build again.  The other people in the book club found this perplexing, but I think I understand it.  I told them that when you have the ability to make something, you take that with you, and the objects matter less.  If you can make a house, you know how to make it again.  I think it’s harder to give up objects you can’t make yourself.  I can’t make a house, so the idea of abandoning one is painful.  In Pa’s case, he would have probably been more upset if he’d lost his fiddle.  (I can’t do anything else that man managed in that book, but at least I’m one up on him there.)

I love interesting objects.  I would miss our pachinko machine if something happened to it, or the tiny dish of stars I bought in Venice, or the coffee table that used to sit in my grandma’s family room.  There are things that are precious to me and irreplaceable, but in the end things are just things.  We are caretakers of objects in this lifetime, but they are not as important as the people who enjoy them.

So maybe my violin will turn up.  It could just be misplaced somewhere in the building.  Or maybe someone really did swipe it.  I’d prefer it was stolen and being played than lost and silent.  In the meantime, if someone tries to sell you a one of a kind first ever violin made by someone named Korinthia Klein, slip me an email.  I want to meet them!  (And introduce them to these nice people in blue….)
Posted by Korinthia at 7:39 PM