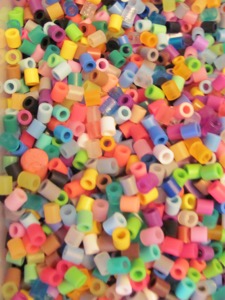 Do you do perler beads?  I had no idea what they even were until a few years ago.  If you’re still in a parenting stage that involves being wary of choking hazards, then you likely aren’t stocked up on perler beads, but we are drowning in them at our house.

For the uninitiated, perler beads are tiny plastic cylinders with a hole in the middle that you arrange on a little pegboard and then melt with an iron so they stick together and maintain their collective shape.


You end up with colorful and useless little shapes to keep forever and ever.  I’ve already decided that one day when my kids are grown I will gather up their perler bead creations and declare them to be coasters, but in the meantime they are just ever present little objects scattered around our home that I am forbidden to throw away. 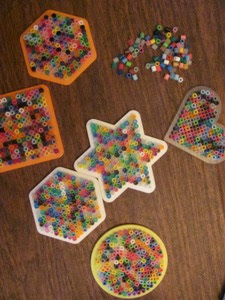 Aden does rather creative things with perler beads, making things of her own design like small animals that come with accessories.  For Easter she made a series of small bunnies with carrots and baskets.  But right now supreme ruler of perler bead land is Quinn.  He loves them.  He’s been cranking out lots of shapes lately.  He likes to line up the empty pegboards in the order that he will fill them in…. 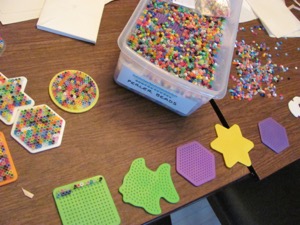 ….and then line them up again by category when they are finished. 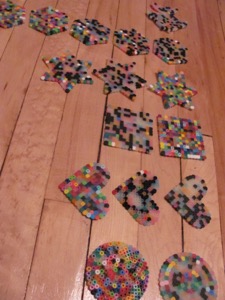 The whole perler bead activity is a good fit for Quinn and his interest in lining things up.  He’s good at arranging all the little beads and carefully bringing them to the kitchen counter for ironing.  Quinn likes it when I just hang out with him while he does his own thing, so sometimes I’ll play around with the perler beads myself.  I decided to make an alphabet, so every time I sit down with him and he’s in perler bead mode I make the next couple of letters.  For some reason Quinn’s favorite letter is R (I think because it’s fun to do in sign language which is just crossing your fingers, but who knows?), and he’s looking forward to me making that one when I get there. 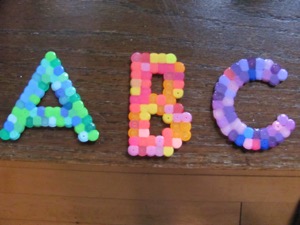 In any case, one day I will have many coasters and fewer beads on my floor.  (Luckily stray perler beads aren’t as painful to step on in bare feet as legos, but they just as ubiquitous.)  As far as crafts go it’s less messy than painting, and light years better than moon sand (what a horrible gritty mess that stuff is) and it’s easier to clean up than play dough.  It’s one of those phases that could be annoying if I weren’t sure it will be short lived.  Too much of childhood goes by quickly, and I like how seriously Quinn bends over his perler bead work as if he’s doing an important job.  And it is an important job because it’s part of being a kid.  He’ll be independent soon enough and won’t need my help with little things the way he does now.  Despite the frustrating repetition sometimes of tending to small children, something about the perler bead projects reminds me what my role is as a parent.  On some level, picking up and ironing perler beads, along with respecting those odd little plastic creations once they are formed, makes me a parent.  And I love being a parent. 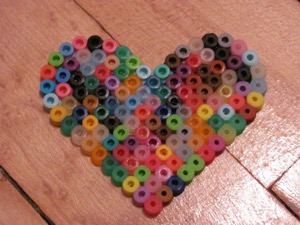 Posted by Korinthia at 6:10 PM