We just got back from our annual Easter trip to New York City.  It’s expensive and exhausting getting a family of five to New York and back, but worth it.  I’m impressed with how much we manged to pack into a week, and yet there was so much we never got to.  We already have plans for what to tackle next year.  Our trips tend to be a paradox of feeling both long and short at the same time somehow.

I could write about a hundred blog posts on different aspects of our adventure, but just to organize it in my head a bit here is the quick rundown of what we did:  Monday we went to Hoboken to see Carlo’s Bakery of Cake Boss fame.  Tuesday we spent a quiet rainy day at the apartment doing sand art and letting the kids play in the playroom across the hall.  Wednesday we went to the Metropolitan Museum of Art and the park.  Thursday we saw Madagascar Live at Radio City Music Hall, made our annual pilgrimage to the Nintendo store to get Pokemon toys, and I got to look through violins and bows for the upcoming instrument auction at Christie’s.  Friday we visited the Babble office and then took the Ikea ferry to Brooklyn to meet with a friend who is helping us work on a book.  Saturday some people stayed home and a few of us hung out in Chelsea all afternoon, and then the kids put on a play after dinner.  Sunday we dyed and hid eggs, and Ian and I were able to go off to see Book of Mormon on our own.  Monday was the Museum of Natural History and the flight home.  Mixed in with all of that was a lot of time on subways, eating from carts, walking, rain, wind, and Quinn threw up a few times in the night (you know, to keep it real I’m sure).

So I’m just going to dive in and see how much I can get to writing about, and if there is something in that list anyone specifically wants to hear more about just speak up.
First off, navigating an airport with three small kids is a special event in and of itself.  I’ve been doing this for awhile, and I’ve got some ideas to share for anyone interested.

Always assume there will be a long delay.  The only times I’ve gotten in trouble traveling with my kids is when I’ve paced myself in terms of activities and snacks only to find out there is an extra two hours to fill that I hadn’t planned on.  I keep a box at home of art supplies we use just for travel.  Those twistable crayons are great, lots of pads of paper, and little activity books with mazes and dot to dot games, etc.  I usually pack Uno cards, a ball, and a DVD in my laptop.  When the girls were smaller a magnadoodle kept them very busy and was perfect for the airport and the plane.  Usually I hide small chocolate eggs or Hershey kisses at our gate (on the Milwaukee end, anyway) and that keeps them happy and occupied during delays.  I dole out single tic tacs to any child willing to read me an ad on the wall and explain to me what it means. 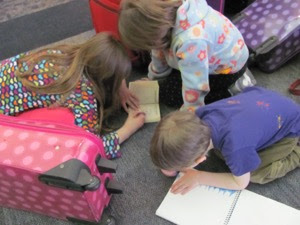 (Kids hunkered down with their projects at the Milwaukee airport during a long delay.)

The biggest revelation about travel came a few years back when I realized my girls, at least, were capable of dragging small travel bags themselves.  We found cute ones at Target pretty cheap.  It’s so much easier for us to each have our own carry on bag instead of trying to pack one big one to check.  Quinn now has his own bag, too, and we get around like a little luggage convoy when we travel. 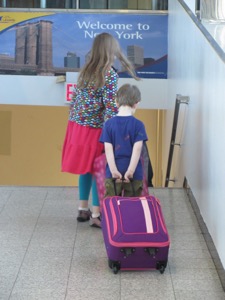 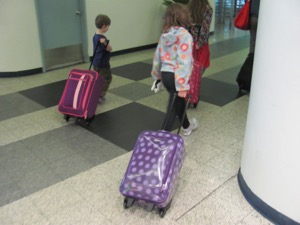 (Kids at LaGuardia wheeling along.)
We try to keep the kids in shoes that are easy to slip on and off (although remembering to check that they are wearing socks is an issue for us), and they are good about helping get those trays onto the conveyor belts for shoes and jackets.

Anyway, New York!  What’s the first thing we did in New York?  Leave for New Jersey!  It only takes a bit over an hour to get to Hoboken by subway so we took the kids to visit Carlo’s Bakery.  Aden and Mona are big fans of the show Cake Boss (although we haven’t seen any recent episodes because we only watch what’s available on Netflix) and they really wanted to see the famous bakery for themselves.

Sounded like a great idea, but unfortunately many many other little girls also had the same great idea.  In fact, when we exited the subway station and stepped onto the streets of Hoboken, a man passing us the other direction saw our little band of kids, shook his head and smiled while saying, “Carlo’s Bakery,” and nodded the right direction.  And we found it all right.  There was a line to the end of the block, and when we got behind a woman at the corner, she said, “No, this isn’t the end of the line.  THAT’S the end of the line.”  And she pointed down the next block and the block after that to a sea of people that we never did spot the end of.  Estimated wait time was four hours. 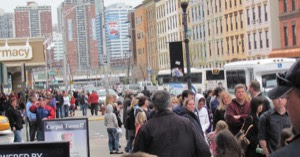 (Part of the line in Hoboken)
We weren’t doing that.  We used the bathroom in the city hall across the street, asked a guard inside where he would take kids for cupcakes that wouldn’t require an all day wait, and he sent us to a cute place called Crumbs with no line a few blocks away.  It wasn’t exactly like being able to say we stepped on the set of Cake Boss, but what kids are going to complain when they get handed this? 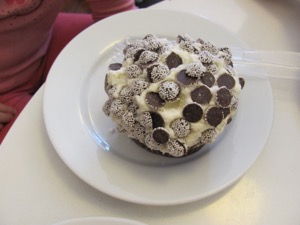 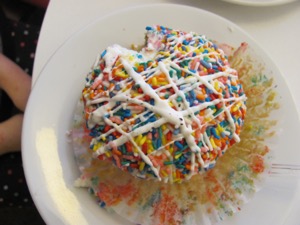 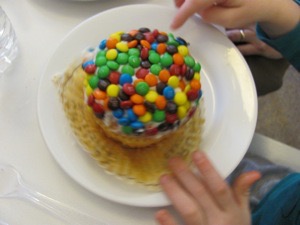 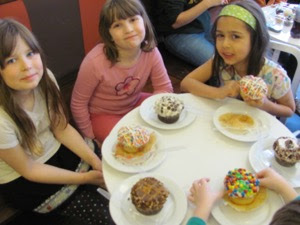 (Aden, Mona, and their cousin Ellora with a snack in Hoboken.  Mona’s favorite movie candy is Sno Caps, so that she could order a cupcake covered with them made her day.)

But we did peek in the window of Carlo’s Bakery, and we can say we were there, and that was fun even if we didn’t go inside.  Although the kids have already asked if next year we can plan ahead and get there very very early.  Since we have a backup bakery now, why not? 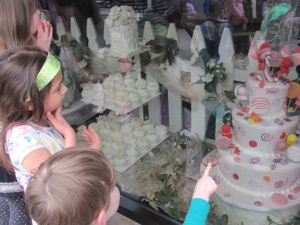 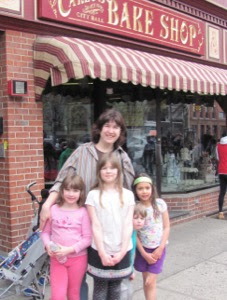 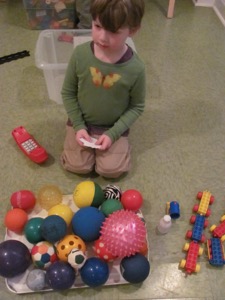 So when my kids think of New Jersey they think of cupcakes.  When they think of New York they think of the playroom across the hall from their cousin’s apartment.  A lot of time in New York is spent playing, and this trip they put together a network of stores.  Quinn sold balls.  When I selected a few to buy, he told me they were $5 and then handed me some homemade money.  Aden’s a little more savvy and actually takes money rather than giving it out when you buy something from her, and Mona’s thing was all about adopting animals so they could go for a ride in her cart.  Or something.  I have a hard time following the ins and outs of their games. 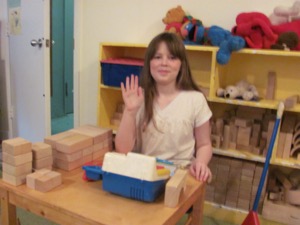 My brother and his family also have a dog, and this is also a big part of New York for them. 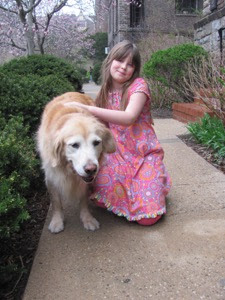 I think we are very lucky to have family in a place like New York City so that our memories are so personal.  We had a great time exploring the Met, and we do things other tourists do, but we get to combine that with the fun of cooking waffles in the morning and hanging out in a real home.  It’s a big adjustment squeezing five extra people into an apartment that usually holds three, and it doesn’t always run smoothly, but it’s family and that’s important even when it’s not easy.  There’s nothing like seeing my kids with their cousin and hearing them whispering together in their bunk beds at night.  I love that.

And I think that’s all the energy I have for blogging right now.  It’s great to be home, but the flight back took longer than expected, and you never realize how tired you are until you have a moment to really sit still, and I am wiped out.  More soon.
Posted by Korinthia at 5:38 PM