I’ve now had glasses for about a year.  I’m not good about remembering to wear them, so I still think of myself as a person who “has glasses” rather than a person who “wears glasses.”  But I have at least grown to accept them more than I did when I first realized I should get a pair, and decided recently to get some glasses that were a little more bold.
My first pair of glasses (which I plan to keep by my bed) are simple and not particularly noticeable.  I needed time to ease into being a person with glasses, and these have been like the training bra of eyewear.  A lot of people last year told me when I first started wearing them that they couldn’t figure out if I’d always had them because they just blended in, which was fine by me.  This is what those look like: 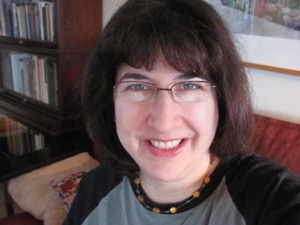 But I’ve decided to embrace the whole glasses thing better, starting with bolder frames that really look like I’m wearing glasses.  I have plans to also invest in a pair that is truly fun and interesting as soon as I spot something that really strikes my fancy, but in the meantime these are my new, more noticeable glasses: 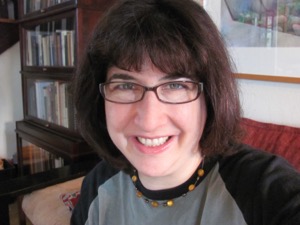 I figure these put me more on the Tina Fey rather than the Sarah Palin end of the glasses wearing spectrum, which seems more funky and fun.  I don’t know.  It’s hard to judge your own looks sometimes, so I’m going with the fact that Ian says I look good, and my kids aren’t objecting.

(I wish I had a photo of my kids when they were trying on anything within reach at Target optical, but they wouldn’t let me take one.  Mona was drawn to huge sunglasses, and Quinn liked everything with rhinestones.  The responsible adult in me kept telling them to put things back, but I loved watching them try on glasses.  If any of my kids ever need a pair they will look adorable.)

The thing that’s still funny to me is that I don’t wildly need glasses, but both eye doctors now have been just appalled that I don’t wear them all the time.  They act as if I’m practically blind which is crazy.  I see better with the glasses, but fine without them.  I’m typing this post without them.  (So if you don’t like my writing, be nice!  Apparently I’m doing this practically blind!)  All the people I know who wear glasses try mine on and say they don’t do anything as far as they can see, so I don’t think it’s dire and don’t understand what is freaking the doctors out.  Are eye doctors just easy to freak out?  I wish I understood what my prescription meant, though.  I asked for a copy in case I come across super cute frames at some other store, but it doesn’t say something like “left eye is 20/40” or anything that I was expecting.  It says: Distance–OD Spherical +1.5, Cylinder -2.25, Axis 005.  Distance–OS Spherical +1.5, Cylinder -1.75, Axis 003.  Near Add +1.00.  (Maybe those of you who can interpret that are freaking out, in which case, you are welcome for the adrenaline rush.)

I’m a big wimp in some ways, and the idea of any kind of eye surgery makes me just grit my teeth and wince, so embracing glasses is the most likely long term plan for me.  And I’m getting there!  Next pair of frames will be super cool, and I will be ready to show them off.  In the meantime, I really like the new ones.  I actually feel kind of cute.  (Not Mona cute, but there’s no way to compete with that.)
Posted by Korinthia at 9:08 PM

Email ThisBlogThis!Share to TwitterShare to FacebookShare to Pinterest
Labels: glasses