Money is one of the strangest topics in the world.  It’s fictional, but we depend on it.  People die over money.  It governs many of the decisions we make, a number of which we would insist have nothing to do with money even when it’s not true.  Money dictates who gets health care, which children get a good education, where we can live, what we wear, where we go, and who we get to talk with.  Money shouldn’t change everything but often does.

My monetary aspirations have always been to have just enough that I have the freedom not to think about it very often.  When you don’t have any it can dominate your life.  My winning-the-lottery-fantasies all involve paying off the student loans in my family and setting up college accounts and funding school orchestra programs.  I have everything I need and much more.  Unexpected millions would be exciting to give away or do something meaningful with, but not necessary for any of the things I want for myself.  (I think it would be really cool, for instance, to have a pool table.  But honestly, if I had a place to put it and desperately wanted to make that happen, we could figure out how to do it without the lottery.  So it’s a matter of will, not money.)

Our own situation with money at the moment is strangely ambiguous.  We had nothing for a long time.  We weren’t in debt but we had almost no savings.  Ian and I were used to breaking even when we combined our resources and expenses.  We couldn’t afford health insurance and paid for the birth of our first child out of pocket.  We were one medical emergency from complete ruin.  State aid in the form of Badger Care (which provided health coverage for me and our children) gave us peace of mind when we had our second baby, but we still roughly broke even with most of our living expenses and that was okay.  We didn’t need much.

Then Ian got deployed, and suddenly there was money.  Many of the military families I read about suffer financial hardship when the breadwinner gets called up because the combat pay is often a pay cut compared to what they earn in the civilian world, but for us it was a significant step up.  It was weird for me because there was money in the bank but no husband to share it with.  I kept thinking of things Ian and I could suddenly afford to do together, but then remember he was in Iraq so it didn’t matter anyway.  Then Ian came home and we used the deployment money to open our own business, so there were lots of expenses and much less income.  Then he got deployed again and I used that money to buy a bigger house.

Now he’s back.  I currently have no idea how much we make and how much we spend.  The fluctuations in our expenditures and income have been so extreme and there have been so many changes in the past few years it’s hard to have a sense of where we are now.  We suspect the violin store is doing well enough that we could live on what we earn there without the Army money, but we aren’t sure.  Fortunately we have just enough of a financial cushion that it’s not crucial that we know that immediately.

Sometime soon when Ian and I have a block of time to sit together we’re going to figure all that out.  It would help to know what a reasonable budget is for trips to the grocery store and Target.  I’m not a crazy spender, but if the kids want to buy a DVD for movie night instead of trying to find it at the library, can we afford it?  I’m not sure anymore and that makes me uneasy.

In any case, I told Ian that when we do sit down and make a list of hard numbers of what we make and what we spend, I want to show it to Aden.  I never really had a clue about what it cost to run our home when I was a kid, and I think it’s important.  Aden is old enough I think it would be enlightening for her to see all the places our money goes.  I’m sure she doesn’t associate the gas in the stove with an expense or know how much it costs to keep the phone working, or that leaving the water running is another way of spending money.

For the most part my children all have only vague concepts about money.  For her last birthday Mona received cards from relatives that she opened along with her other gifts, and one had a one dollar bill in it, and another had a fifty dollar bill in it.  She was equally thrilled with both, and said, “Oh!  This will go great with my bank account!”  All my kids know they have bank accounts that we put their money into, but none of them knows how much is in there.  Quinn likes to have bills to save in his wallet, even though the wallet never leaves his room.

When the weather is warm Aden and Mona like to run a lemonade stand outside my violin store.  They sell lemonade and give away business cards and handmade fans.  It’s exciting for them to be able to attract people to where they are and interact, but the money is only a barometer of activity.  Most of the the time when they close the stand down they just hand me the money when they come inside.  I’m always surprised and ask, “Don’t you want it?” and they shrug and say not really.  My kids don’t get an allowance.  They point out things they think they want when we’re in stores, but they don’t whine or beg for anything.  Occasionally if they want something inexpensive or useful I’ll ask if they’d like me to buy it for them, and that makes them happy.  They know they have a lot, and they aren’t greedy.

But money is still interesting to children, even if they don’t understand it or know it’s value.  They know the lemonade stand should involve money, even if they don’t care about it.  They talk about earning money raking leaves or shoveling snow, even though they can’t answer the question about what they would use the money for.  A thousand dollars sounds the same as a million dollars to them.  My goal with their financial education is to make sure by the time they go out in the world they understand the hidden costs of credit cards, know how a checking account works, and have a realistic sense of how to budget.  Luckily we have time to get there.

In the meantime, Quinn has come up with his own system for making money.  It involves paper, scissors, and markers. 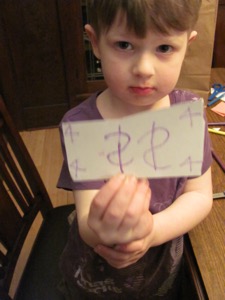 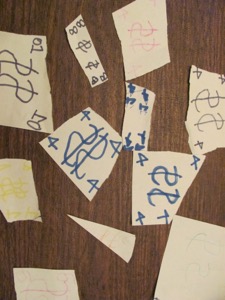 He’s been very busy making money.  He’s collecting it in a paper bag.  He wants to give it all to our neighbor, Julie.  We haven’t seen Julie as much as we’d like lately, and when my kids ask why I tell them she’s usually working.  Quinn knows people go to work to earn money, so I think he’s hoping if we give Julie a bag of money she won’t need to go to work as often.  I like that as vague as my kids’ ideas about money are they have their priorities and hearts in the right place about it.

I’m very thankful that at this moment in time that money is not a stressful point for us as it is for many people.  That can change in an instant because life is unpredictable like that, but right now we are okay and I’m glad.  Having enough money means freedom from it in my book.  My kids know just enough to know it’s not something to take lightly, but they aren’t worried about it, which is quite a luxury.

I think it’s fascinating that Quinn is interested in making money in his own fashion.  But you know what else Quinn makes?  Rainbows. 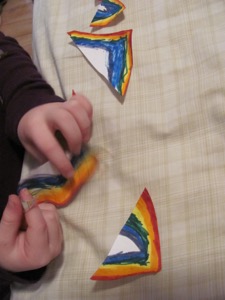 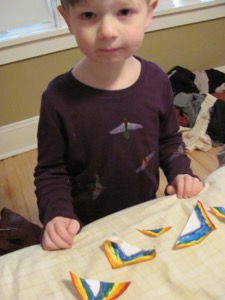 I’m glad our life is such that he can devote so much thought and effort into creations of pure beauty.  I like that he wants to keep the rainbows, but he made the money to give away.  I hope in his adult life he’ll have the security and freedom to continue to do so.
Posted by Korinthia at 10:27 PM