…. about the mom who canceled her son’s tonsillectomy because his snoring stopped as soon as she scheduled the surgery?  Because for weeks and weeks he slept in perfect silence with no hint of a struggle to breathe?  And since the snoring had been his only symptom suggesting his large tonsils should come out that removing them now seemed crazy?

Well the universe has a sick sense of humor, because I did cancel my son’s surgery after standing over him at night and analyzing his every intake of air for anything that sounded bad and hearing nothing but peaceful slumber.  So when the nurse called to give me instructions to prepare him for surgery the next day, I explained to her that we were canceling.  He no longer had any symptoms suggesting his large tonsils were a problem, so unless the doctor had any other reasons for still recommending surgery we were not going to do it at this time.  And the very morning of the day he was supposed to go to the hospital?  Snoring like a little buzz saw.  I wanted to scream.


Since then he’s been sleeping quietly again, so I’m not beating myself up now.  My thinking is that he’s very young, we can always schedule another surgery if we change our minds, and why take risks with something so serious if there is no evidence that it’s necessary?  So as hard as it was to overrule doctors I trust, I’m the mom and I have to go with my judgment and my heart.

But it’s amazing how much of parenting is a never ending cycle of self-doubt and uncertainty.  Quinn snoring the morning of the canceled surgery was like a punch in the gut.  I felt tricked, and foolish, and unworthy of making decisions for my son.  We want so much to do whatever the right thing is for our children, but based on our experience and understanding of the world what looks right varies from person to person, situation to situation, and often isn’t very clear cut.

I’ve come across more negative comments than usual on recent parenting articles and I think it’s really unfortunate.  You can have strong feelings about an issue without saying those who disagree are stupid monsters.  I can’t believe how mean people can be about topics like cloth diapers, or organic food, or circumcision, but I suppose it’s easier when you don’t put your real name by harsh words.  All the parents I know think long and hard to come to the decisions they do about what is best for their children.  Often those decisions are different from ones I would make.  I’m positive there are people reading this who will think I should have just taken Quinn to the hospital and had his tonsils removed and been done with it.

Quinn himself was disappointed that his surgery was canceled, but I’m sure only because I did such an impressive job of preparing him for a week’s worth of chocolate ice cream and a new toy from the hospital gift shop.  But even when the answers aren’t completely clear I have to trust myself and hope others allow me that freedom.  Parenting is hard enough without anonymous vitriol adding to the stress.

As of today I am comfortable with my decision to cancel Quinn’s surgery.  The scariest sounding complication of large tonsils is reduced oxygen to the brain causing damage that can lead to learning problems.  But here is a picture of the kind of thing Quinn does for fun, practicing letters in upper case, lower case and cursive forms.  He taught himself to write and is already reading and he’s only four. 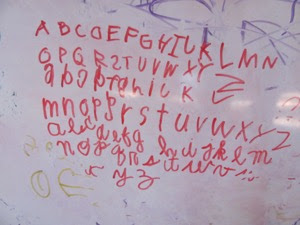 I’m not too worried about his brain.
Posted by Korinthia at 10:33 PM