How Have You Lived Without Crayon Pockets? (Babble)

My kids are always doing projects.  It’s in their genes.  Ask me how many different things I’m working on at any given time and the list includes any number of writing projects, a violin I’m (supposed to be) building, a coat rack that will be really cool someday, and dozens of crafty ideas just waiting for their turn.  Ian has been consolidating our online computer equipment in ways that are way over my head, but he’s always got some project going on too.  The kids are no different.

Most of Mona’s projects involve what she refers to as her “paper creations.”  These are some really out of date examples from back when she was six of the kinds of things she makes, a couple of which I rescued from the trash because I love them even when Mona thinks they are not good enough: 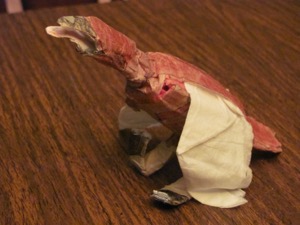 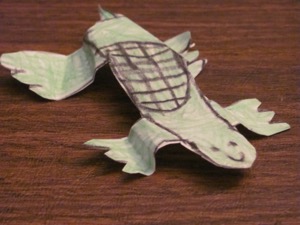 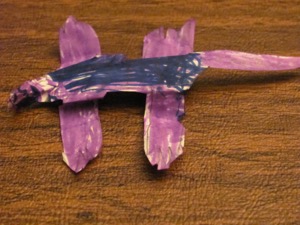 She’s not content with things being flat, so she always makes folds to pop things up a bit, and often wraps tape around wads of paper or tissue to make them three dimensional.  (I love the beak on that bird!)  Back in the Fall she wished she had a toy kangaroo, so she used scraps of Halloween costume material and masking tape and whipped one up in about an hour. 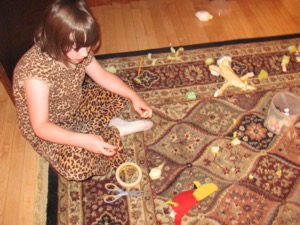 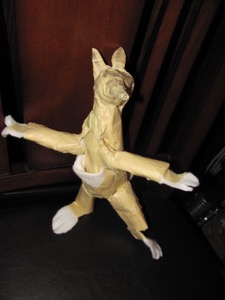 Luckily Montessori school caters to kids’ interests, so Mona has managed to tailor most of her lessons around her paper creations.  She makes models of particular animals and then writes a report and builds a display and gets to do presentations for her class.  To date she’s done presentations about blue jays, lemurs, flashlight fish, and the current one is about water walking lizards.  Anyway, Mona always has a project or two or ten going. 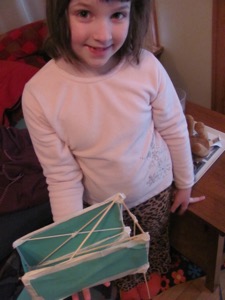 Quinn, by comparison, is more into writing.  He spends long stretches at a white board we have propped up in front of the fireplace working on his cursive.  He also likes to cut out pieces of paper to color, either making valentines or money or rainbows or small invitations.  I once printed him out a bunch of cursive practice pages I found online and it kept him absorbed at the violin store for a whole afternoon. 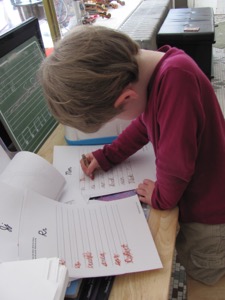 He’s also still actively lining things up in rows and putting things in things.  So Quinn is always busy. 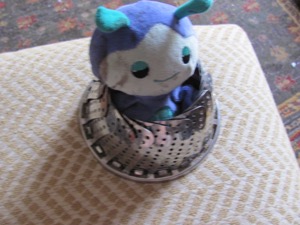 Aden’s projects tend to be more tied to some kind of display or performance.  When she was about five she once made a whole natural history museum in the living room with legos.  Last summer she enlisted a friend to help her make the family room into a zoo, complete with maps and tickets.  She likes to put on plays and magic shows–anything that requires rehearsals and costumes and props makes her happy, especially if she is in charge.  I’m constantly coming across odd scenes like this: 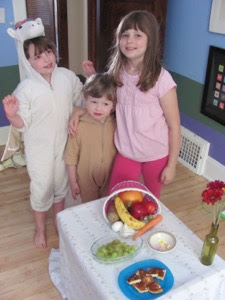 I think it was a restaurant game of some sort, and the bicycle basket is a cornucopia, and the flowers are a nice touch, but I don’t know why Quinn is in his kangaroo costume or why Mona is peeking out in a unicorn suit.  The table cloth?  That’s the sheet off Aden’s bed.  We have many discussions about not using non-toys in games, but it never registers.

The latest big Aden production was back in Michigan when we all visited for the gallery closing party.  She invented the “Pipe Band Girls” and kept her sister and cousin in the basement for hours of rehearsal and ticket making.  The show was actually really good, despite the fact that both Mona and Ellora suffered stage fright and wouldn’t do their solos, but Aden soldiered on and reveled in the applause at the end.  Here’s Quinn being enlisted as the ticket taker (tickets were a penny apiece), and Ellora, Mona and Aden playing an assortment of bottles tuned with different amounts of water and other objects found in my parents’ basement that sounded good when you hit them with sticks: 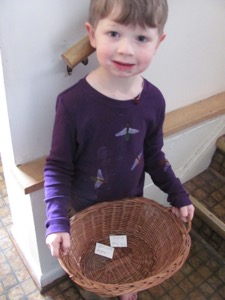 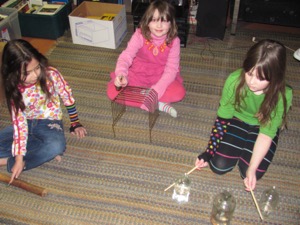 So have you been sufficiently distracted by this tangent or are you still wondering what crayon pockets are?  Well, I’m almost there, I promise.

Recently Quinn went on a drawing binge that included “hanging things up.”  The dining room is getting filled with Quinn art, which mostly consists of rainbows and the alphabet in lower case cursive over and over. 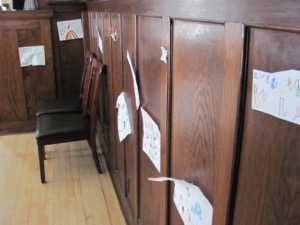 Mona was also busy cranking out drawings the same day that Quinn was “hanging things up” and decided that a giant tub of crayons was not convenient enough.  Why have your creativity delayed by walking to the craft shelf to get the crayons?  It was pure hell, apparently, because Mona began installing “crayon pockets” in every room. 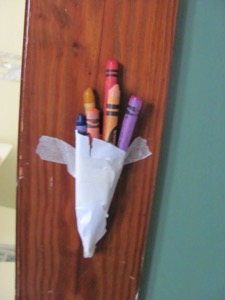 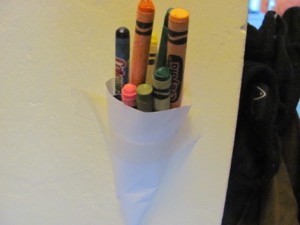 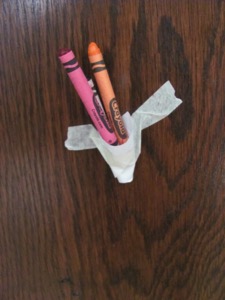 But what do I know?  Apparently not much about the necessity of crayons at your fingertips at any given moment.  Of course, they have neglected to keep the crayon pockets stocked with crayons, and now they are just sad looking little paper cocoons taped to my walls.  Which I’m hoping by the time you read this I will have managed to take down and clean up in order to make way for the next important project.  (Please let it not involve glitter….)
Posted by Korinthia at 9:51 PM