Life in a Case (Babble)

You can learn a lot about a musician from what he keeps in his case.  I see a lot of cases as they pass through my violin store.  You can tell if someone is neat, organized and prepared, or if he or she is the kind of stand partner who is always asking to borrow your pencil during rehearsal.  Small children keep odd treasures in the pockets like acorns and little bracelets and bits of string.  You can tell if someone has a cat.  If you rifle through their music you can figure out what they are working on, who their teacher is or was, where they play….  There are programs, scraps of information about old gigs, and there are lots of photos.  (For the record, it’s hit or miss in my viola case if I have a pencil, I should replace my rosin which is ridiculous since I own a violin store, and I have a picture from my wedding and every official portrait my kids have ever had taken.  The most complete professional photographic record of my kids from their hospital photo on is in my case.) 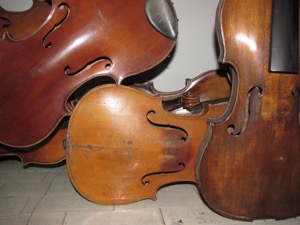 A lot of cases also get abandoned at my violin store, as well as instruments that no one loves.  Any violin can be repaired, but if the cost exceeds the value of the instrument and the owner has no sentimental attachment to it, more often than not people just leave it on my counter and walk away.  I have a lot of orphaned violins around that I just kind of pile in the window out of the way.
Tonight I had to work late.  I cut a new bridge for a cello today, but that particular job takes me about six hours, so even though I spent all day at work I decided to go back there after I’d had dinner and reading time with the kids.  A cello takes up my whole workbench, and I kind of wanted it done so I could make room for all the other projects I need to get to.  I got the bridge finished (which I did a mighty nice job on if I do say so myself), and even though it was almost midnight I took a minute to get my space cleaned up.  I like putting my tools in order and sweeping maple shavings off my bench.

After a little cleaning the only thing that was looking really cluttered was a stack of papers that I’d been moving around my work area since Monday.  One of my customers needed to borrow a case to transport an instrument home in, and I’d simply given her one of the abandoned old cases under my bench.  I told her she could just throw it out when she got home.  It was old and worn and not particularly safe, but it would be fine for one car trip.  I’d scooped all of the papers and odds and ends from the pockets out of it before handing it over.  Tonight I finally looked at all of that more closely.

It’s hard throwing things away that had meaning to someone else.  Some of it was easy to pitch, such as old strings and a broken bridge.  Some things made me pause and wonder what the significance was, like business cards from restaurants or a map of a nearby suburb, or information about various home improvement projects.

But the rest of it was kind of heartbreaking.  There were dozens of song lists put together for various gigs with old-fashioned sounding titles like ‘Waltz of the Bells’ and ‘Tyrolean Dreams,’ all written in the same careful hand.  There were postcards from Europe, with the same block printing exclaiming, “This was the hotel where we stayed!”  And lots of articles.  The more I read through, the clearer the picture of an entire life came into focus.

The owner of the case had apparently done some kind of work in the steel industry, but his passion was for violin.  There are articles from various local papers with pictures of “the retiree who loves to play.”  He was made an honorary member of the Musician’s Union eleven days after I was born.

And there are obituaries.  Some for other local musicians.  Most of them copies from different papers for his wife.  He continued to play and dance for years after his wife passed away, but he kept her close.  There is a letter from her that ends, “I promise to love you today, tomorrow, always forever.”

What do you do with such things?  I know for certain that whoever brought this case to me was not interested in its contents.  I’m very careful to make people look through everything before they abandon anything at my store.  The case has been sitting under my bench for a while, and I don’t remember what happened to the violin that must have come with it.  Maybe it was restored and given a new case.  Maybe it was donated and has a new life with another player who is grateful for it.  I doubt that it is one of the orphans in my window, but I don’t know.  I see so many violins.

I threw away the maps and the menus and the research on plumbing and furnaces.  I saved one gig list, a photo from what looks like a wedding reception in the late 1960’s or early 70’s, some of the articles, the obituaries, the union letter, the love note….  I don’t know this man, and yet I feel like I do.  He’s quoted in one of the articles as saying, “I will continue to play until I die, or I can’t move my fingers.”  He had a life.  It’s over.  But part of it was in his case.

I will bundle these things into an envelope and put them in a storage bin of letters I keep at work.  It won’t take up much room, and I think he would have liked these treasures that he stored with his violin living on in a corner of a violin shop.  It will matter something to me to know they are there.  Because you can tell a lot about a musician from what he keeps in his case.  Not everything, but usually the things that matter in the end.
Posted by Korinthia at 9:34 PM