Aden’s recent birthday party went really well, but it occurred to me as I was trying to fall asleep that night that it was almost a disaster.  By the skin of our teeth did it work out.
But first of all, this is what Aden looks like at nine.  It is blowing my mind that she is nine already.  I remember her as a tiny thing in the hospital, and my precious baby learning to walk and talk, and then run and dance and play with friends and become a big sister and go to school and oh my god now she’s nine. 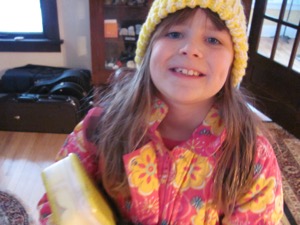 For Aden’s cake this year she wanted a marble cake with chocolate ganache and cut strawberries in the middle layer, butter cream frosting, and pink fondant.  I was new at most of that, but it came out okay.  I made my own fondant which tasted pretty good, but my husband and I slipped a bit getting it onto the actual cake after I rolled it out, and I ended up making some pink icing to pipe all over the place to hide the seams and cracks.  Aden was happy with it so that’s all that mattered.  She put on all the little candy pearls and sprinkles and candles. 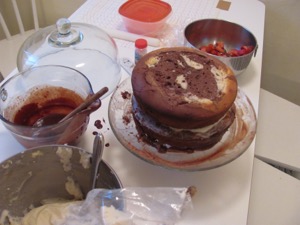 Anyway, the party crisis was this: I had Aden make her own invitations and be responsible for handing them out at school.  Two nights before the party I asked her who was coming, and not only wasn’t she sure, but she said three of the invites never made it out of her backpack.  It was after 8:30 in the evening, so I made her call the mom of each of the girls in question and ask if they were available for the party (which they were).

Now, initially Aden told me she wanted a small, quiet party, maybe even with her being able to serve hot cocoa from her tea set for fun.  But she made about eight invitations, which with my three kids adds up to a lot of kids.  The only guests who actually showed up for the party were the three I made her call.

The party was perfect.  Three girls turned out to be the perfect number to have over.  That made six kids gathered around the dining room table, and they made their own pizzas and while the pizzas baked the kids played Pin the Tail on the Donkey, and then a sort of makeshift two team version of Pictionary.  (That game was adorable, because Quinn was the ‘hat’ that held the slips of paper telling people what to draw, and for some reason they couldn’t all sit back to watch the person drawing, they all kept jumping up to gather close to the easel.) 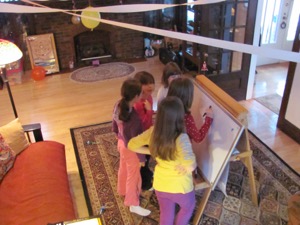 In any case, they all had a great time, they made great pizzas, they were happy with the games, Aden got to serve cocoa in her little teacups, the cake was fine, and Aden just smiled and smiled and occasionally jumped up and down with sheer joy.  It could not have been nicer.  Except that at the end of the day it finally hit me that if I hadn’t made her call those friends a couple of nights before the party, there would have been no one there.  Can you imagine how tragic that would have been for Aden to be waiting by the goody bags she put together to hand out, standing among her carefully hung streamers and balloons and have no one come?  Agh!  I’m not sure exactly what happened to all the other invitations.

I know one of the kids who came to Mona’s party had simply put that invitation up on his fridge without mentioning it to his mom until the night before, and she panicked and gave me a call and I told her it was not too late to RSVP and of course he could come.  I’m sure lots of Aden’s invitations will show up during winter break backpack cleanings.  But as I say, it was a perfect little party and exactly what Aden wanted.  I just can’t believe how close it came to being a really disappointing day instead.  I think next year I will follow up on the guest list a little more closely.

I can’t believe I’ve been a mom for nine years.   It’s gone by so fast and yet feels like forever. 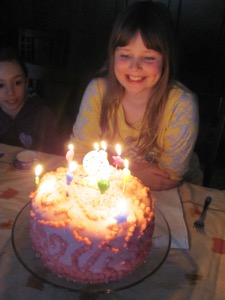