I adore my niece.  Her name is Ellora, and she’s smart and dear and I love her.  Many people around the world are already acquainted with Ellora through my brother’s Daily Photo project.  Arno has compiled photos from every day of his daughter’s life into a time lapse animation so you can see her age.  (He also wrote a program that keeps her eyes aligned in each one so her focus seems locked on you while you watch the images fly by.)  It’s pretty amazing:

Ellora is the only first cousin my children have, and for the first time in recent memory she won’t be joining us for Christmas vacation.  My kids all cried when I told them.  Mona in particular is having a hard time with it.  But!  We did receive a less animated but still entertaining substitute in the mail the other day.  Introducing, Flat Ellora: 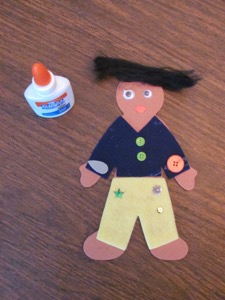 (Sadly, one of Flat Ellora’s eyes fell off soon after arrival, but Mona quickly set about gluing it back in place.  I’m sure she’d do the same for her actual cousin if one of her eyes fell out in our dining room.)

Flat Ellora is a project my niece is doing for school based on the popular Flat Stanley idea.  She shipped a paper version of herself to us to show around Milwaukee for a week.  It’s not as fun as having real Ellora in town, but my kids had a good time with the flat version.

The first thing we noticed about Flat Ellora was that she was not dressed appropriately for winter in Wisconsin.  She arrived from New York in a fashionable outfit, but it’s blizzard city here, and staying warm trumps everything when it comes to attire in the Midwest during bouts of wind and snow.  Aden and I set to work making her a snowsuit with good boots and mittens. 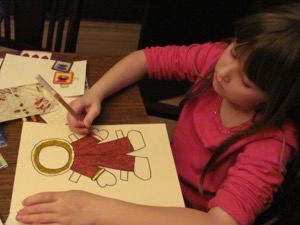 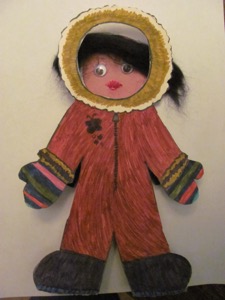 Mona was more concerned that a week in our house means needing a good costume.   I think Mona has more costumes in mind, plus all the kids were concerned about the lack of a suitcase and toys….  I don’t think my niece’s teacher was expecting a new wardrobe and accessories to return with Flat Ellora, but that envelope is pretty stuffed. 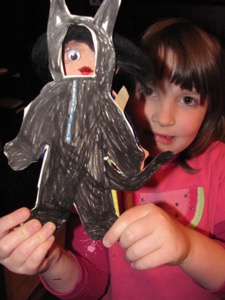 I gave each of the kids at least one day at school with Flat Ellora, along with a digital camera.  My kids would love to take their real cousin as a guest to their classrooms someday, but it’s hard to figure out when such an opportunity would become feasible.  But not a problem for Flat Ellora!  Aden just stuck her in her backpack and off they went.  She forgot the camera that first day, but Flat Ellora was a hit with her class, and got to follow along to violin lessons in the afternoon.

Flat Ellora was in for a higher level of abuse activity the next day accompanying Mona.  There are always a lot of projects and presentations going on in her classroom, and the kids made Flat Ellora a clay dress, posed her near everything and everyone, and pretty much gave her the full tour of the plants and the maps and the puzzles. 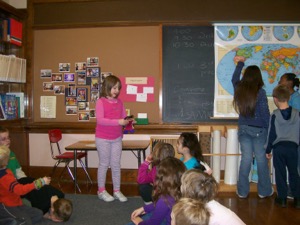 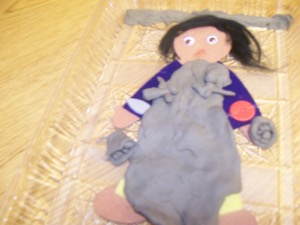 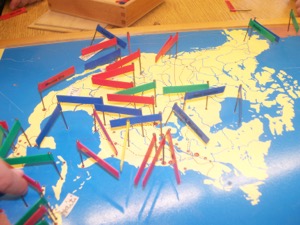 (In the last picture Mona is doing a presentation in front of her class about Flat Ellora and some of the other kids are helping find New York on the world map.)

Unfortunately amidst all the excitement Flat Ellora lost an eye and her mouth and a bunch of hair.  (New York may be a busy place, but it’s got nothin’ on the whirlwind of stuff my kids are up to, so maybe the stress of all the Montessori hustle and bustle was getting to her.)  Flat Ellora had to go to choir rehearsal half blind and unable to sing, but the girls still liked having her there. 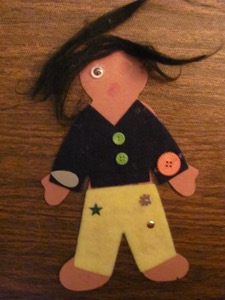 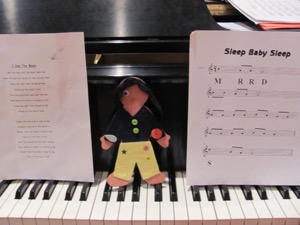 Before bed I found her a new eye, made her a new mouth, glued a bunch of her hair back down and then tied the rest of it into ponytails in the hopes that she wouldn’t lose any more.  Because the next day she was headed for Quinn’s classroom. 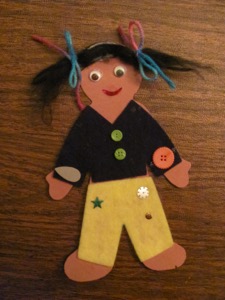 Quinn was very proud to take Flat Ellora to half day kindergarten.  He told me he showed her how to write lower case cursive letters. 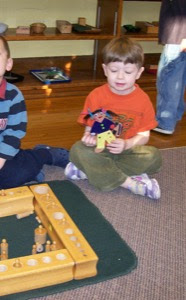 Aden and I worked together on the journal that came with Flat Ellora.  Unfortunately the letter we received with it suggested we talk primarily about transportation and infrastructure as we experience it over the time Flat Ellora is here.  That would be the car.  Nearly everything we do is within a radius of about a mile and a half and it’s cold out.  I mean, it’s different from what they experience in New York where they take the subway and buses all the time, so maybe our trips day after day in the minivan on, well, roads, will sound exotic, but I doubt it.  (Actually, when the real Ellora was little and she’d visit us she’d talk about getting “on the car.”  I wonder why we get ‘on the bus’ and ‘on the train’ and ‘on the ferry,’ but we get ‘in the car?’)  Ian did have to fly out of state on the last day for Army drill in Colorado, so we got to mention the existence of airplanes.  We live only about six miles from the airport, so it’s hard to forget about airplanes.

In any case, we summed up the transportation elements of our lives in about two sentences and then decided to fill the journal with pictures about going to school in Milwaukee and what we did this week, which included setting up our Christmas tree and hanging stockings.  We have a stocking here for my niece, so it was nice to get to use it even for just her Flat self. 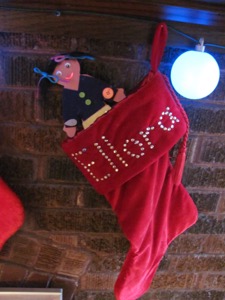 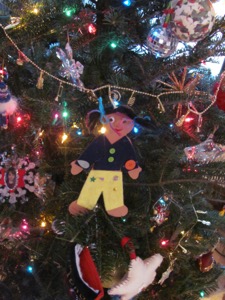 We liked hosting Flat Ellora.  It was strangely sad to see her go when we took her to the post office.

I’m kind of hoping after seeing her that one of my kids’ teachers gets inspired to do a similar project.  Flat Stanley is interesting, but what a fun idea to send a little flat version of yourself off into the world somewhere!  (I want to mail myself to Italy…..)
Posted by Korinthia at 8:06 AM