Forget Walking and Chewing Gum at the Same Time... (Babble)

I am blogging while walking on my treadmill!

Despite my hopeful attempts of late to get in better shape, getting out to exercise keeps getting interrupted by life.  The kids will be off of school or someone gets sick or I have to use my time to wrap presents because things like memorial services pop up.  I know these aren’t real excuses to some people, but I argue those are people who actually like to exercise.  I know several people who run, and not because they have to but they seem to like it.  I am not one of those people.  I wish I were one of those people!  The idea of exercising for the pleasure of it rather than as some time sucking chore is amazing to me.  I like the results of it, I understand it is something I must do, but I am infinitely happier reading a book or building a violin or cuddling with my kids, none of which burn calories or strengthen muscles.  Time spent exercising makes me want to scream.

But, my weight has reached proportions that make me physically uncomfortable, so I have to start paying attention and putting the task of getting into better shape on the front burner.  I can’t ignore it.  I want to be healthy and I want to be a healthy example to my kids.  I can’t be a role model that shows them exercise is fun, but at least I can prove to them I believe when something is important to do, you do it even if you don’t want to.  And whenever possible, be creative.

I saw a news story a few weeks back about a workplace that got rid of traditional desks and replaced them with treadmill workstations.  The employees could walk slowly while they typed and used the phone, and everyone was happier.  What an idea!  If I could combine my laptop time with exercise, that could work.


We have a simple, fold-up treadmill that had gotten buried behind computer equipment in Ian’s study.  I had him move it into my shop.  I am not crazy about anything invading my shop space that is not directly related to violin making, and the treadmill is being doomed to a sawdust covered existence, but it’s an out of the way room with enough space for it, so in it went.

My first thought was to construct a tall shelf thing with legs that would fit on either side of the treadmill, but then I realized if I faced the wall I could just screw a little shelf in right there.  It’s not very feng shui to have my back kind of to the door, but maybe I’ll just get a little rear view mirror.  (Or try turning my head.  That sounds cheaper.) 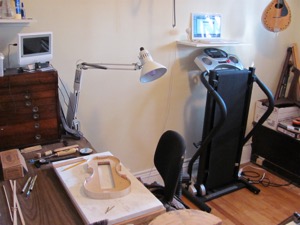 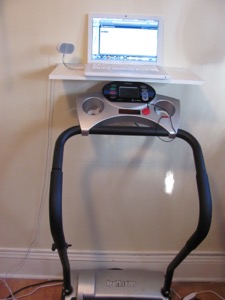 Anyway, so far it seems to work.  Walking somewhere at a pace between one and two miles an hour is easy, but I figure it adds up and it’s better than not doing it.  I walked a mile last night while writing emails and catching up on my favorite blogs.  Then I walked a little faster while watching a show on Hulu, and slowed down again when I wanted to type.  I’ve composed this whole post while walking on the treadmill, so I can actually consider blogging exercise.  And it doesn’t feel like exercise, and it doesn’t feel like wasted time.  This could be good!  The trick will be to see if I can write blog posts about anything other than walking on my treadmill.  We’ll find out soon.
Posted by Korinthia at 4:09 AM