People say to me all the time that they are amazed at how much I manage to get done with my husband away while running my business and raising three kids.  All I see are the number of projects that lie neglected and so much I wish I could do better.  Most of the time what people point out as examples of my interesting accomplishments I see as evidence that my priorities are a bit askew.  I should be working on a new violin, or finishing a novel, or doing volunteer work, but anything that self-indulgent is really difficult while Ian is deployed.  I can’t be creative in the ways I’d like, so I come up with new smaller things instead.  Whenever possible I try to come up with something that involves the kids as well.  I think people assume when they see us tackling our odd projects that I must be caught up with housekeeping and work.  It’s not true.  But I’d rather obsess in short bursts about creative things than fold the laundry most days.  The most recent example of this is the Big Clock project.

Our new house has a nice little breakfast nook.  It has a big wall that faces part of the kitchen and that space needed something.  The problem was I didn’t want to hang any art that would fade there (since the space is sunny) or put up anything in danger of being splattered by an unfortunate food accident.  (Did you know once jello dries on something it’s almost like caulk?)

I thought about it for awhile, and finally decided the best use of that space would be a giant clock.  But not a solid clock, because there is a light switch on that wall in an odd spot and I didn’t want the clock to obstruct it.  So I ordered big clock hands online and told the kids they would each get to design or decorate four numbers each.


It took a bit of experimentation over the course of several evenings to work out the kinks.  The minute hand would get caught on the light switch or one of the numbers and then I’d go back into my shop and saw out another little block of wood and heat up the glue gun to make adjustments, but now the thing actually keeps reliable time.   I marked out all the spots for the numbers and put velcro there.  I told the kids they could modify or replace their numbers whenever they like, as long as they ask me to get them off the wall for them. 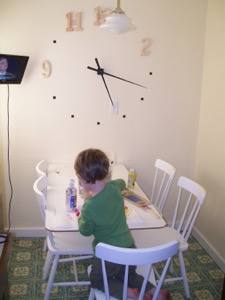 We went to a craft store where Mona and Quinn found ready made wooden numbers they liked and they painted them.  Aden decided to design her own numbers, and wound up making most of them out of aluminum foil glued to cardboard.  The finished clock has all of us pretty pleased.  They love pointing out which numbers each of them made whenever someone new comes into the kitchen. 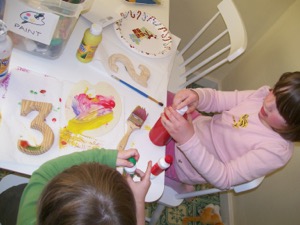 This particular project was good for several reasons.  I got the hands while Ian was still here on leave and he helped me get them working, so I think of him when I look at the clock, too.  Then the morning we had to put him on a plane back to Iraq, I was able to drive straight from the airport to the craft store.  I let the the kids cry in the car for as long as my heart could take it, and then I said, “Hey!  Let’s go find some numbers to paint for our big clock!  Wouldn’t that be a cool thing to show pictures of to daddy?  Who wants which numbers?”
Their faces were still wet with tears as we walked around the craft store.  But they were so happy and excited about their mom’s new crazy idea that it kept them really well distracted through much of what could have been a much harder day.  The discussion alone about who should have which numbers and why was serious enough to keep them occupied for quite awhile.  (We ended up with Mona on 2, 9, 11 and 12, Quinn on 3, 4, 7 and 10, and Aden was gracious about taking whatever numbers her younger siblings left her.)
I always have some unnecessary project going on, and some work out better than others, but this one was definitely worth the effort.  I love the big clock.  (Now if I can just teach all the kids how to read it maybe we won’t be so late to school every morning.)