Rock of the Week (Babble)

My children are still young enough that they think their parents are cool.  Poor things are in for a shock someday when they realize knowing a lot of Dr Who and Star Trek trivia won’t likely help them with their social status, but hey, in the meantime their dad is pleased all his kids know what a dalek is, and I’m trying to teach them a little bit of everything that interests me while they are willing to listen.  One of the things I love best in the world is rocks.

I don’t have a huge rock collection compared to people I know with serious rock collections, but I have a lot of rocks.  I particularly like pieces of petrified wood, and I’ve always been a sucker for pyrite.  Pyrite (iron sulfide) is more commonly known as fool’s gold, and at the gem and mineral fairs I used to go to with my family as a kid it was shiny and cheap and I loved it.  I like fossils, I like fourite, I like calcite and malochite and gneiss and shale….  I took all the geology classes my music major schedule would allow back in college and I still happily browse through my old textbooks when I run across them.  There’s something marvelous about holding an object that is so incredibly old in your hands, and knowing a bit about how it was formed.  Rocks are neat.

For years my poor husband has had to help me move boxes of rocks. We’ve lived in 4 different apartments and a house together since we met way back in 1989, and he’s helped haul my rocks over state lines and across time zones.  (He loves me a great deal.)  Unfortunately we’ve never lived in a space that actually allowed me to enjoy my rocks because there was just never enough room, so they stayed in storage everywhere.  Until now.


I busted out my big box of rocks the other day and had a wonderful time sorting though them and rediscovering all the wonderful things I’ve collected over time.  Some of the prettiest things I bought at different fairs, but a large number of them are things I found on my own.  I have some fabulous quartz I picked up in India near the Ajanta caves, and some beautiful large stones from Cape Bretton, little chunks from a pumice desert in Oregon, and a handful of colorful pebbles from the lake where we spent our honeymoon in Michigan. There are my rocks from Alaska, a hunk of marble from the streets of Rome, and little polished stones I’ve had as long as I can remember.

Quinn was particularly intrigued with the shells I also have, many of which I picked up during low tide at the Bay of Fundy when Ian and I were there about 15 years ago, long before kids but in geologic time not even the beginning of a blink.  Quinn and I had fun looking at each little item (except for discovering the remains of one of my old pet hermit crabs in one of the shells, but at least that’s one mystery from 7th grade solved at last). 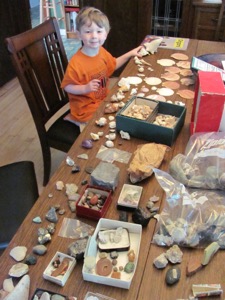 The girls were so thrilled with all the different things that when I suggested we implement a ‘Rock of the Week’ event they were all over it.  Mona got to pick first and selected a trilobite fossil.  The plan is that every Sunday each kid gets a turn at picking out any rock to feature in a prominant place and we get to talk about what it is and enjoy having it on display for the whole week.  I have no clue if this will hold their interest past the first month, but I like it. 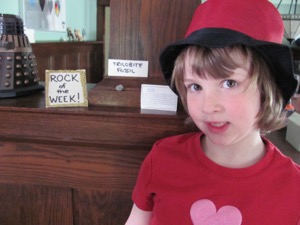 So now we’re a rockin’ kind of family, just not the kind anyone would put on reality television.  (Rock of the week!  I’m a happy mama.)
Posted by Korinthia at 11:22 PM

Email ThisBlogThis!Share to TwitterShare to FacebookShare to Pinterest
Labels: geology, rock of the week, rocks