So Many Roads (Babble)

Whew.  I did a lot of driving this past weekend and I’m still feeling a little dazed.
My cousin and his wife are expecting a baby in June and they had a shower for the occasion in Ohio on Saturday.  I love my cousin and I’m very excited for them and thought to myself how hard could driving out there for a quick visit be?  Ha.  The only real problem with the timing was that the series finale of Lost was on Sunday and I had planned to watch it with my mom.  She’s in Michigan.  So I added a trip up to Detroit to the itinerary, checked a couple of DVDs out of the library for the kids to watch in the car, packed a bag and an air mattress and we hit the road.

I pulled the kids out of school on Friday and did the all day drive with many potty stops and a meal at Denny’s in about ten hours (I think–I lost track with the time zone change).  We were planning to stay with a relative when we got to Columbus, but halfway there we found out she was about to bury her adorable but ancient dog Smokey Joe who had died a couple of nights before.  I didn’t want to burden her with house guests while she was so sad, so we called a friend who we trust really means it when she says, “Come stay with us anytime!”  Short notice indeed for a minivan full of freeloaders to just arrive and stay two nights, but my friend couldn’t be nicer, and she really didn’t seem to mind.  (She even seemed a little sad we couldn’t stay longer, which means she’s also a little crazy, which means I love her even more now.)


I think it worked out for the better that we ended up at my friend’s home.  My kids are comfortable there and toys are abundant.  But the nice thing for me was that I was able to leave my kids playing happily for a couple of hours while I visited my grandma in a nearby nursing home.  She’s been moved to a higher level of care since I last saw her, and it was good to be able to spend a little time with her quietly, without my kids along as a distraction.

Seeing my grandma anymore is surreal.  She’s fading away.  She seems to live in a dreamlike state, and I hope with all my heart that it’s pleasant for her.  But in certain surprising moments she’s still my grandma, and during those moments I realize just how much I miss her.  She asked me several times (each time as if it were the first) when Ian is coming home.  I would catch her up on how he’s doing, but all that talk of a beloved husband returning to Milwaukee from a war kept morphing into grandpa in her mind.  It’s hard to know when she makes a comment what she’s actually commenting on.  We could carry on a conversation, but I have no way of knowing if we were sharing the same one.  I told her how Ian asked if we could please go to the cottage in Michigan for a little vacation when he gets back from Iraq and she looked delighted.  My grandma loved her cottage, and after a few moments of thinking about it she started talking to me as if we were there.  I suppose if you can live in a nursing home but in your mind live in your favorite place from any moment in time, that would be the silver lining of what’s happened to my grandma, but it still makes me sad.

I miss her so much, and it’s confusing to miss her most when I’m holding her hand in my own.  It usually upsets her when I tell her I’m leaving, so now when I go I just tell her the next thing I’m doing in lieu of goodbye.  I told her Saturday when I took her to the dining area for lunch at the end of our visit that I was going to check on my kids.  I don’t know if she waited for me to return, or if she even remembered I was ever there a few moments after I was gone.  I just don’t know much about my grandma anymore.  But I’m certain she still loves me, and for that I’m humbled and grateful. 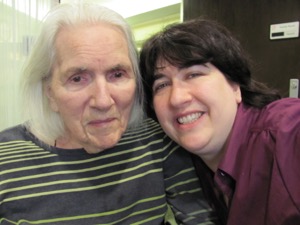 (My gram and me.  We’ve both looked better but it will have to do.)

The rest of that day I spent out with the kids at the baby shower.  The jumble of emotions at that event was bizarre.  I was still reflecting on my visit with grandma which was bittersweet, I was thrilled for my cousin and his wife, sad about the dog that had died, proud of my kids for behaving well, anxious about being shy around all the people I didn’t know, happy to see relatives I’ve missed, and depressed that Ian wasn’t there.  It was a wonderful party and well worth all the driving, but I was emotionally wiped out by the end of it.  If I were to write the experience down as fiction people would complain that juxtaposing large themes of birth and death and love and loss into such a condensed setting would be unrealistic.  But life is really like that more often than we care to admit.

That night my kids got to bed way too late because I’d tried to read the new kids’ book club selection to Aden (The Witches by Roald Dahl) and it made her so scared she cried.  I was up telling amusing stories about our old pet rabbits for a good hour so the kids would go to sleep happy instead of upset.  Poor Aden.  Part of me appreciates that she’s so tenderhearted, and part of me thinks I need to toughen her up fast or the real world will destroy her.

The next morning we hit the road again and made it to my parents’ house by mid afternoon.  I do have to say that my kids are troopers in the car.  It’s hard driving for such long stretches, but it would be infinitely worse if my kids weren’t so nice to travel with.  They watched movies in the backseat and laughed and sang and slept while leaning on each other, and I couldn’t have asked for them to be better.  I was never that good so I don’t know where they get it from.  Must be their dad.

Anyway, when I arrived at my parents’ house and mentioned something about looking forward to watching the last episode of Lost on the big TV, my mom said, “Oh, no, we only use that one for DVDs because it needs a converter box.  We’re going to watch on the little TV in the kitchen.”  I let out a small scream and said I did not wait six years and drive all those miles to watch my one show wrap up on a small kitchen TV.  No no no.  I don’t ask for much (my husband is reading this on another part of the globe thinking “Except for a newer bigger house….”) but Lost has been my one little entertainment luxury that I cling to desperately, and even though it was rude I said we needed to find a better place to watch.  My mom, being awesome, called a neighbor who was out of town to get permission to use her TV.  This turned out to have the added bonus that I got to watch without my kids in the same house, so it was a really nice break.  (There was also the amusing element of a friend of my mom’s watching with us who hadn’t seen the show in years and asked me to get him “caught up.”  I told him there was no catching up on Lost.  You either invest yourself in it or there’s no point to it.  It’s just not a casual show.  I found myself doing some impolite shushing during the program that I’m embarrassed by, but you just can’t jump in at the finale and ask me what’s happening because I barely know myself and need to pay attention.)

So getting to watch Lost with my mom was fun, and my kids got to draw with my dad which they loved, and then first thing Monday morning we were back on the highway.   The things I was reminded of during this leg of the journey was how amazing it is that there can be nothing appealing on so many radio stations across much of the midwest, and that there is no good time to drive through Chicago when the sun is up.  We got home in time for a late dinner and even later baths.  The nice thing was I had hired some friends to install a few sorely needed outlets in different rooms in my house while we were gone, and coming back to little improvements was like getting gifts from unseen elves.  (Electrician elves are among the best kind.)

That was my weekend.  I’m glad we did it, and I’m glad it’s over.  (And it got me fantasizing again about how marvelous a transporter a la Star Trek would be for certain trips.  Someone is working on that for real, right?  Please?) 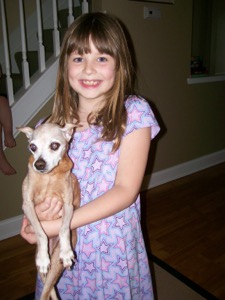