Mold-A-Ramas at the Imagination Station 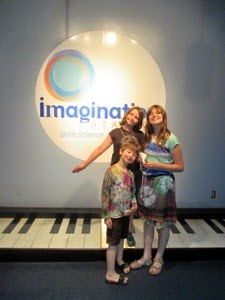 A couple of days after our trip to the Toledo Zoo, we did another day trip from Detroit back to Toledo to collect Mold-A-Ramas at the Imagination Station.

Parking was confusing, but the science center itself was good.  At first we thought our kids were a little old for it.  We walked through a few simple displays that weren't particularly inspiring, and then decided to have lunch.  The food was good and not too expensive and we got to eat outdoors with a view of the river.  Afterward the kids went exploring on their own and my mom and I were going to be content with sitting outside and reading.

But then I decided to check on the kids and discovered the deeper you went into the Imagination Station the more interesting it got.  I found Quinn by a mesmerizing display that involved a spinning disk and lots of sand that you could manipulate with brushes and sticks to create patterns.  We probably could have done that all day. 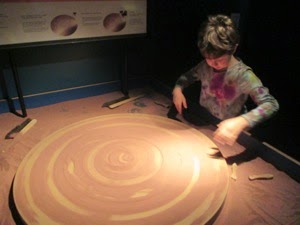 Then there were magnets, dominoes, new games, and a crazy flywheel you could use to jump really high. 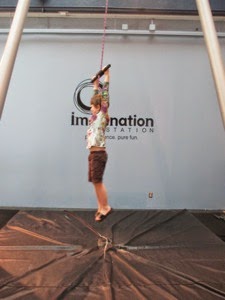 The best area was the section on illusions.  There was a demonstration of the Stroop Effect, which is where you get confused looking at text spelling out the names of colors, but the text itself is in a different color (i.e. the word "black" written out in blue).  It's amazing how stumbly your mouth and brain get on that.

There was a really disconcerting display about inattention to slow changes.  You stare at a photo on a screen for 30 seconds, and then are asked if you saw the change (which more often than not we didn't), and then it shows you what startling change occurred right in front of you that you (probably) missed.  Sometimes it was big things!  In one picture an entire building on the left side rotated to face a different direction and only Mona had an inkling that the change had happened in that area of the picture.  That kept us glued for a while.

The craziest thing was a room set on a severe angle, with even more severely angled visual cues within it, that made you dizzy and off balance.  My mom found it almost impossible to walk through, and both of us felt heavier in there.  So that was fascinating.

In any case, the Imagination Station in Toledo made for an enjoyable afternoon.  It was free with our reciprocal membership to Discovery World, and they have two Mold-A-Rama machines! 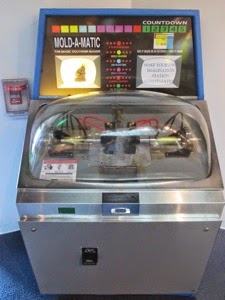 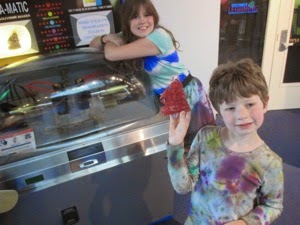 Technically they are Mold-A-Matics, they only took bills, and the first one we found had a new figure for us.  A ship!  (It's a cool ship, but the back of it is just blank, which is a little disappointing.) 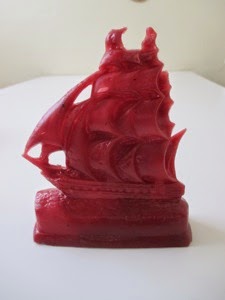 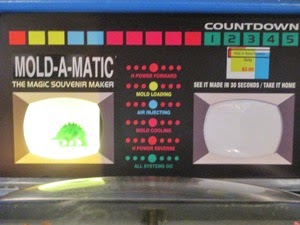 Then my mom found a second machine on the next floor down with a stegasaurus.

I know they have other molds at that location, so I asked at the desk before we left if they had any other past figures I could buy, and they produced a T-Rex with a hole in its head, and a slightly mangled robot.  Pretty good to get four different Mold-A-Ramas from a place with only two machines! 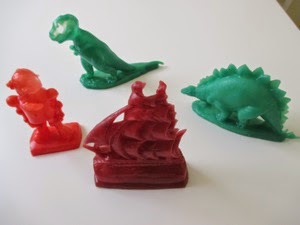 This brings our current family collection up to 145.  I think.  No, wait!  We had 132, and we got 14 on this trip, so 146.  They're getting harder to count.  And we just reordered them on the mantle from rainbow order to grouping them by type.  Currently giraffes are in the lead with six of those on display, then monkeys, lions, tigers, gorillas....

There is a special one coming to us, soon, though!  Can't wait for it to arrive so I can show it to you.
Posted by Korinthia at 7:41 PM