What an amazing thing it is to be able to take a bit of a break from the normal routine.

I actually got a vacation of about two and half weeks!  Unusual and exciting for me, and only really possible because I could leave my store in my assistant Robyn's capable hands.  Ian took the kids and our niece up to the cottage first, and after about a week I was able to join them there for a few days before Ian headed back to Milwaukee on the bus and I took the kids on to Detroit, then Ohio.

The time in Detroit with my parents was really nice, despite the fact that their street is being completely torn up and redone--sewer pipes, sidewalks, and all.  Apparently it takes incredibly loud rumbling equipment to do this, and my little dog was in a shuddering panic about it during working hours.  I got to spend a little bit of time with my brother before he took his daughter home with him (we all miss my niece, but I don't miss the pressure of the daily photo), I got a dinner out with my friends (a rare and wonderful thing), and an afternoon at my friend Gabby's house where our kids got to play together and we got to just talk.  My dad and I got in some Scrabble (he got 50 points for using all his letters during one game, and I learned the word "sportive"), and it's always great to spend time with my mom. 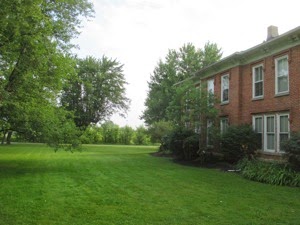 In Ohio we got to stay for a few days with my Uncle John and Aunt Charlotte.  Their home has been surrounded by commercial development in recent years, so their piece of property feels like a stately oasis.  They are so generous and kind.  We felt truly welcome and at home.  And it was refreshing to have an ordinary block of time to spend together instead of a rushed and crowded holiday experience.  We had time to just be and get a small sense of what their regular lives look like. 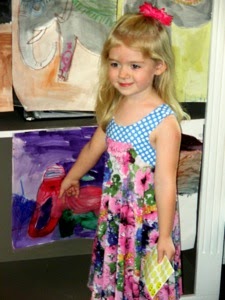 I envy my uncle's family all living so close together and being in touch throughout the day.  My cousins Mary and Tony are both nearby, and Tony's daughter is adorable.  Our first night in town she was in a children's art show which we had fun visiting.  It's hard for me not to think of little Kate as still a baby, but she's really only three years younger than Quinn.  I hope we get more chances for them to have cousin fun. 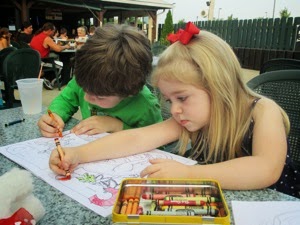 We visited COSI downtown (nice science center--could use a Mold-A-Rama machine), and afterward John drove us to a couple of other interesting places.  First was a topiary garden designed to look like the Seurat painting A Sunday Afternoon on the Island of La Grande Jatte.  Ian and I had visited there back when we were attending college at OSU, but my kids had never seen anything like it.  I loved watching them wander among all the figures on those pretty grounds. 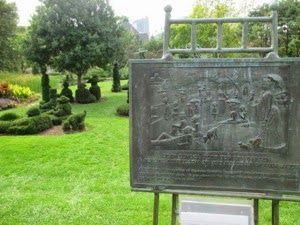 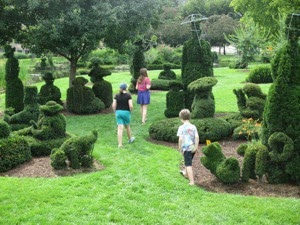 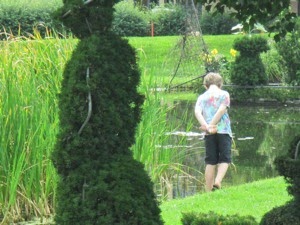 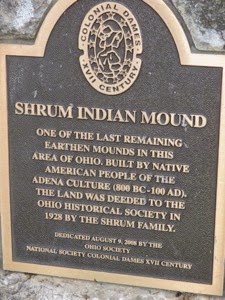 The second stop was an Indian mound.  There are several interesting ancient mound sites in Ohio (the most famous being the Great Serpent Mound, which from above looks like a wriggly, partially coiled snake eating an egg), and the Shrum mound John took us to was the first one my mom ever saw that inspired her to draw them.  The mound is next to the Scioto River and across from a sprawling residential development in a peaceful little spot that I'm glad has been preserved.  We climbed the mound and enjoyed the view, then Quinn ran down, and by the time I had carefully made my way to the bottom myself I looked up to see Quinn back on top.  He and Mona must have run up and down that mound at least four times. 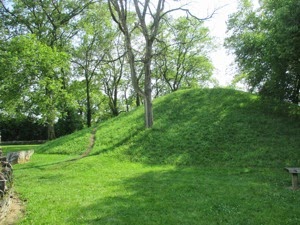 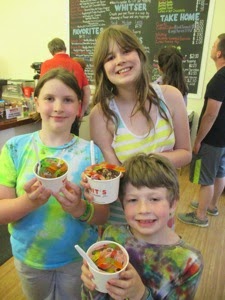 There were treats in Ohio, too.  Frozen custard with gummy worms, pizza, dinner at the Crazy Burrito twice....

I let my kids each pick out one box of cereal to eat while we were staying at my uncle's.  We seldom have cereal at our house so this was crazy exciting for them.  Aden couldn't decide between Lucky Charms and Coco Puffs, but then problem solved when we discovered they apparently now make chocolate Lucky Charms.  (I know I am officially old because nothing about that appealed to me.  My teeth hurt just looking at the box.)  We also never have soda around, so getting soda from the fridge in Ohio was more exciting than it should have been too.  (My aunt and uncle must think my kids are oddly deprived.)

Actually, you never realize how differently you do things in your own home until you stay somewhere else.  My kids just learned on this trip that bacon is breakfast food.  We only ever make it for when we have BLTs for dinner, so when my mom made bacon and eggs in Michigan one morning my kids were really confused.  It would be like serving lasagna in the morning or something, and they have been puzzling over the idea of bacon for breakfast ever since.  So who knew that was part of their education I'd neglected? 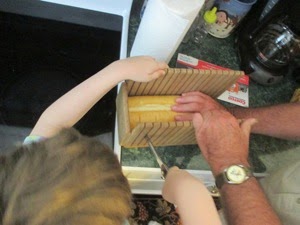 The kids got to try out my uncle's new Amish bread slicing tool, and I'm still not sure how this came about, but Quinn wound up deciding he prefers his bread with chocolate syrup on it.  I started to say something mom-like when he asked to try it, and my uncle overruled me saying in his house the chocolate syrup flows freely, so there we were.  It is hard to state how much my kids love being in Ohio.

Quinn also found a set of plastic Battle of Gettysburg toys in the house, and he and Mona re-fought the Civil War.  Unfortunately for humanity Mona was the South, and she somehow ended up with almost all the cannons, designed better defenses, and even positioned herself in the room so there was a real cannon behind her.  (So if we're ever choosing up teams for a real fight somewhere I want to be on her side.) 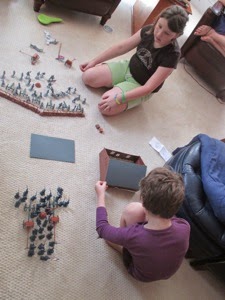 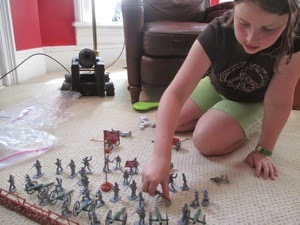 An excellent trip all around.  Except for John and Char's cat whom Chipper wound up confining to a closet by the end of our stay.  (Poor kitty.  Traveling with the dog.... Not my favorite thing.)

But then it was good to get home.  The kids hadn't been there in about a month at that point, and they missed their friends and their things and their Lake Michigan tap water.  I got a few days to just be around and not have to be back at work right away.  Quinn walked on errands with me, we swam at the Y, I finished reading them Harry Potter and the Half-Blood Prince.  It's been really good to just not have to do anything in particular for a bit.

There is also immense value in being able to unplug from the world for a while.  I had email, I checked Facebook, I blogged when I could, but I didn't watch the news.  I knew things were bad in Gaza, but things are always bad in Gaza.  Things were scary in Ukraine and they are still scary in Ukraine.  I think it's important to be informed about the world, but I think it's unhealthy to be so on top of world events that they feel like they are happening right outside the door.

I remember when my grandmother wasn't able to get out very often and she was alone with the radio and the TV for company a great deal of the time, that when I came to visit she was uncharacteristically all gloom and doom.  The world was horrible place.  And I would remind her that if she had to go by only her personal observations the world was incredibly quiet and dull.  Lots of lawns and families and kids playing and the mail getting delivered regularly.  Once we shut off the news grandma always perked up.  There's always something bad going on somewhere, but now we can wallow in all of it everywhere as it happens and on an endless loop.

That's not healthy.  It skews our perspective.  It's wrong to ignore the suffering of others, but it's also wrong to borrow pain that isn't ours and flog ourselves with it as if that's helping anyone.

It was good to not feel tied to the ills of the world for a little while.  I may try doing that for myself once a week where I don't feel obligated to know about about every international crisis, ignorant political gaff, or the latest horrific shooting death.  I'm helpless in the face of nearly all of it, and I can't let it detract from the life I'm trying to live.

That life involves showing my kids what is right about the world, and why they should care about it.  It involves unexpected chocolate syrup, Mold-A-Ramas, board games, and music.  It involves helping those who need it and appreciating love when you find it.  I believe unless you are held hostage by certain circumstances life is what you choose to make it.  I want my kids to see we can choose to make it great.
Posted by Korinthia at 5:54 PM