Then today we went on an official Mold-A-Rama collecting quest.  Our first trip to the Toledo Zoo! 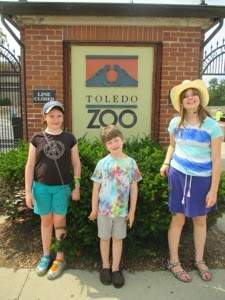 It's a very nice zoo.  In some recent ranking it came out number one in the U.S., which we're feeling a little baffled by, because it was nice, but I don't know if I'd rank it that high.

It's a comfortable size, the displays are very nice.  We got a good look at some cassowaries which thrilled my kids.  We learned about dingoes.  The aviary was particularly charming and introduced us to the adorable "owl finch."

They had a budgie room with seed sticks, and that never ceases to please. 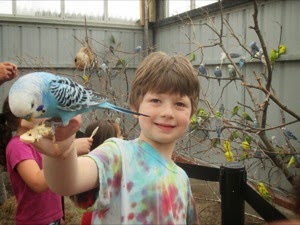 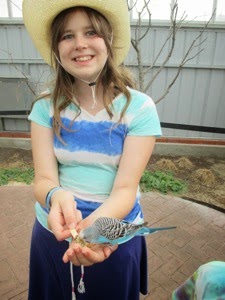 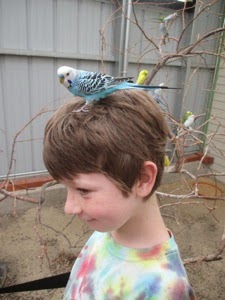 But there's nothing unusual like the nocturnal exhibit at the Bronx Zoo, or as broad in scope as the primate building at the Brookfield Zoo, or as architecturally interesting as the Lincoln Park Zoo.  I like the cat house better in Milwaukee, the polar bear area better in Detroit, and the bird show better at Lowry Park Zoo in Tampa.  Not that there's anything wrong with the zoo in Toledo.  It really is a great zoo.  But number one?  I'm not convinced.  There is too much room for "different" without it meaning "better" when it comes to zoos and life in general.  Maybe some things (most things?) are better off not being ranked. 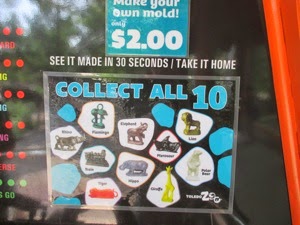 There are ten Mold-A-Rama machines in the Toledo Zoo.  The machines were all Mold-A-Matics and only took bills, not coins.  Seven of them were working, and one of them was not where it was supposed to be.  (Or, at least not where it was listed as being.  We were told there was a tiger machine at the great ape house, but it was actually next to, appropriately enough, the tiger.)  Two of the missing three figures we were able to get at the service desk (the elephant and the train), but the flamingos have apparently been out of order long enough that they didn't even have a stock of them behind the counter anymore.

But we got a giraffe, a tiger, a lion, a polar bear, a rhino, and then new for us were a pterosaur and a hippo.  (I don't know why other places don't do a hippo, because how cute is a little hippo?) 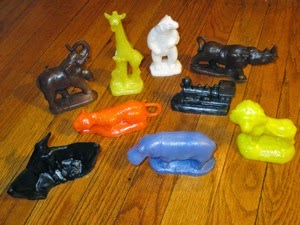 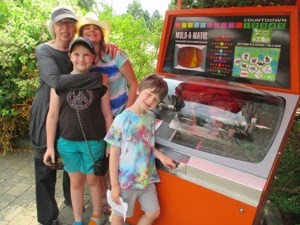 We had a great day collecting.  Spent about six hours and were there until closing, and admission was half off with our reciprocal zoo membership.  The weather was perfect, and my mom came with us which was a real treat.

With a little luck the kids and I will hit the other Mold-A-Rama location in Toledo on our way to visit friends and family in Ohio later this week, and then the only Mold-A-Rama stop left in the Midwest will be the Como Park Zoo in St Paul.  (After that we just need to figure out how to get to to the ones in Texas....)

Can you believe we recently hit the one year anniversary of the beginning of our Mold-A-Rama collection?  No one can ever accuse us of not jumping into something with both feet.  (And you're not going to believe the next step in the quest.  Stay tuned!)
Posted by Korinthia at 11:55 PM